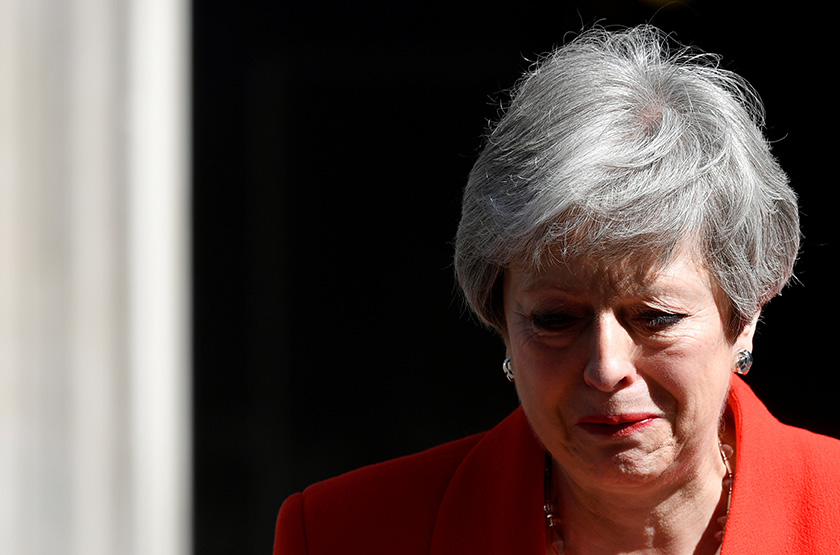 Theresa May resigned as prime minister and, following in the footsteps of Margaret Thatcher, allowed herself a little tear that far from letting her down actually sent her up in the estimation of a lot of people who thought her a touch robotic.

What is going to happen now is that Theresa May will step down as leader of the Conservative party on June 7. She will remain prime minister until a new leader emerges and she gets to welcome Donald Trump during his state visit at the beginning of the month.

Ideally Trump would have preferred that his new best friend Boris Johnson were in post but that will have to wait. No matter, as head of state it is only HM the Queen that he and his family are really interested in.

In the meantime his other best friend, Nigel Farage, will take over the Brexit process and run the country from the European Parliament. Love them or loathe them Trump, Johnson and Farage are the new boys on the block who will grace public life in Europe and America for the foreseeable future.

After leading and leaving the United Kingdom Independence Party (Ukip) and winning Brexit, Nigel Farage formed the Brexit party that is partly responsible for driving May out of office and may yet force a reluctant parliament to leave the EU come what may by the end of October.

When asked in a head-to-head debate with Sir Vince Cable of the Liberal Democrats the reason why people should vote for his new party in the European elections, he said that voting for Brexit in the 2016 referendum was about democracy because those who lose in any democratic process have a democratic duty to support the outcome, however much they disagree with it. On that analysis the fact that 48 per cent of the population voted remain is immaterial since democracy is about how people decide not what they decide.

The diametrically opposite view prevails in the corridors of power in the EU which is a benevolent rather than a democratic construct. If a policy is deemed to be a good policy and a referendum is held and lost, why then you just hold another one until you get the answer you want. There is an assumption in Brussels that referendum results should not be allowed to stand in the way of major policy targets set by the EU and that in the end people will approve once they realise their worth.

Institutionally the EU has never been strong on democracy. It is true that the people of France and Holland rejected the European Constitution in 2005 and were not asked to vote on it again, but in the end a variant was put in its place in the shape of the Lisbon Treaty of 2007. As for the European Parliament it is only recently that it has been given proper parliamentary teeth but its jaws are not strong enough to make a difference.

In a sense this goes to the heart of the unique nature of the EU as a supranational entity. The practice of democracy is very difficult in a collection of states that pooled their sovereignty by forming a single economic area that is in a perpetual state of flux towards an ever closer political union. Nevertheless if the populist parties do well in the European elections which end on Sunday an ever closer union will probably be put on hold.

In terms of her appreciation of democracy, May steered a middle way between Europe and a wayward parliament in Britain that was unwilling or unable or too stupid to appreciate the complexities of the problem in hand. She devised a withdrawal deal that honoured the referendum result to leave without alienating nearly half the population who voted remain that she was able to sell to the EU.

In the end she got a withdrawal deal that was close to staying in the Common Market that people had voted for by a huge majority in 1975 that was also consistent with leaving the EU in accordance with the referendum result in 2016. Alas that was not the primrose way. It was the narrow and difficult way and parliament rejected it three times.

The Common Market was borne of the horrors of World War II in which Britain’s experience was very different to the rest of Europe. Two of the three core countries of the EU, Germany and Italy were on the wrong side; half of France surrendered and the other half collaborated; Spain and Portugal remained fascist well into the 1970s, and the East Europeans were under Soviet communist dictatorships until 1991.

Britain never really bought into the idea that political union in Europe was necessary to keep the peace in Europe; that was Nato’s task.  Britain joined the Common Market in 1973 because she could not compete from the outside but became disenchanted after political union came into prospect.

So there has always been an ambivalence about the Europe in Britain. Brexit is just change in nomenclature. It began life as Grexit when it seemed Greece was going to leave the eurozone a few years ago. Brexit and Grexit are composite words for the process of leaving the EU or one of its institutions. It involves the addition of the word ‘exit’ to the first two letters of the name of the country whose exit is on the cards.

As it happens both Brrr and Grrr are already in use because they roll off the tongue rather well and are used onomatopoeically to express feeling extremely cold or very angry, but the word Brexiteer is different. Musketeer, engineer, pioneer and buccaneer are borrowed from French but the more pejorative use of words like profiteer and racketeer are more recent. I suspect the use of Brexiteer to define a fanatical supporter of Brexit is used pejoratively.

Conservative Brexiteers used to be called Eurosceptics. They went into political hibernation in the 1990s only to resurface looking like lounge lizards on the green benches of the House of Commons. People like Bill Cash and John Redwood are still around, but they have been joined by young Jacob Rees Mogg who is his father’s son. His father, William Rees Mogg, took up the cudgels against the passage of the Maastricht treaty through parliament in 1991 and brought a hopeless judicial review to block ratification.

He had been editor of the Times and an excellent columnist. At that time the likes of Boris Johnson and Michael Gove were busy making a name for themselves as journalists by day and posing as television celebrities by night, but no one imagined them as anything other than pompous, bumptious, middle-class twits not as prime minister material.

As for Andrea Leadsom she is the hyena who resigned last Wednesday knowing that May was going to resign on the Friday and who previously sought to make political capital of the fact that Theresa May was childless. She and the rest of them are loathsome. They made Theresa cry!