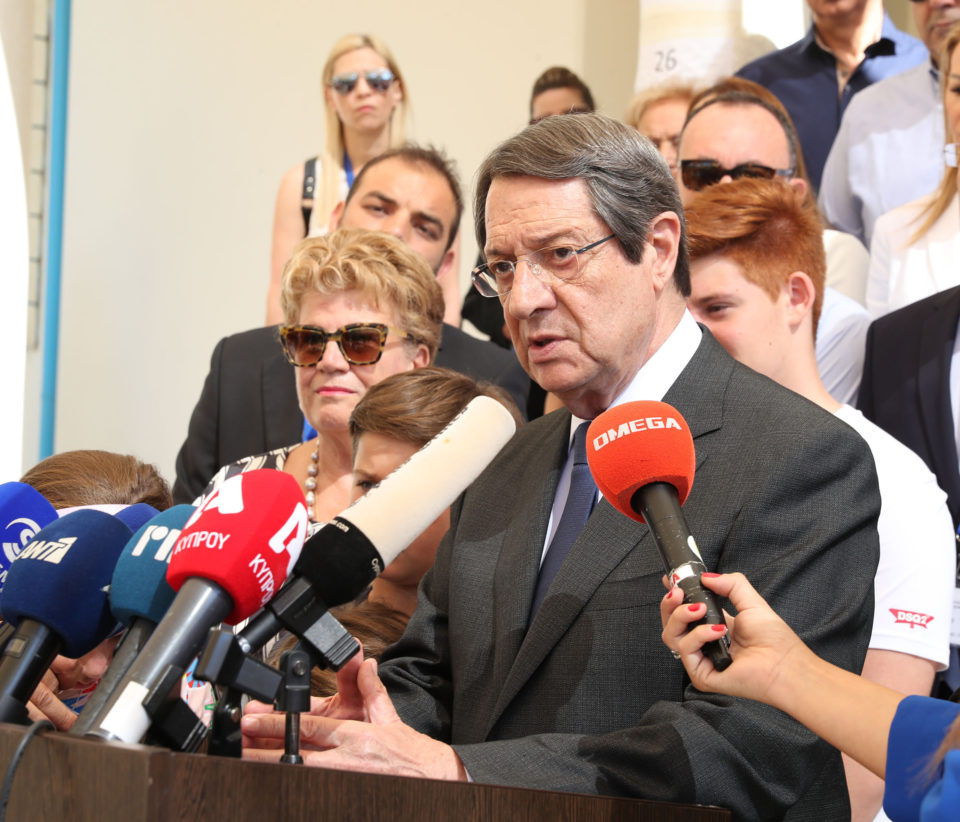 President Nicos Anastasiades and party leaders went to cast their vote in the European elections early on Sunday, stressing the importance of participation.

“Today is another day that celebrates democracy,” said Anastasiades who voted in his home city of Limassol. “It is the one day we get to decide for the great family of the European Union, the one day that we send a strong message about what kind of Europe we want.”

Anastasiades said it was an obligation to participate in the elections. Referring to Turkish Cypriot participation, the president, who was expected to visit a polling station set up for Turkish Cypriots in Nicosia later Sunday said “more and more Turkish Cypriots understand the importance of Europe because when we talk about European citizens we speak for all legal citizens of the Republic.”

Asked if he believed abstinence, Anastasiades said it was not only a concern in Cyprus but also in other EU countries.

Opposition Akel leader Andros Kyprianou said after casting his vote in Nicosia, that the EU “determines our lives to a great extent and it is important to give our own opinion about the course we should take in Cyprus and in Europe.”

He called on citizens to vote.
“This whole period, we were doing the talking, and now it is time for the people to express their own opinion with their vote. I hope that they will participate in this process,” he added.

“Tomorrow a new effort will begin to address the many important problems faced by Cypriot society, especially regarding the solution of the Cyprus problem and handling the small and large everyday problems of the people of Cyprus.”

He also expressed hope that “today will run smoothly in order to confirm that we are a European, modern and democratic country, especially as regards the participation of out Turkish Cypriot compatriots in this election process.”

“The EU decides on about 85 per cent of our lives and thus it is of utmost importance to express our own view on where we want to go,” he added.

Diko leader Nicolas Papadopoulos said the election was a good opportunity to send the message that “our future can and must be free and democratic”.

“I exercised my right to vote as a proud Cypriot and a European citizen,” Papadopoulos said, adding that “today is a beautiful summer day and we can all together send the message that our future can and must be free and democratic.”

Ruling Disy leader Averof Neophytou said Cyprus needed the EU more than ever.
“Today is the time of the European Union, the moment when all of us should weigh the benefits of our participation, but also the responsibility of our abstention,” he said.

“It is wrong to take the benefits for granted and believe the dangers are inexistent. Our country does not have the luxury of turning back, it does not have the luxury of being marginalised again, especially today. Our country needs Europe more than ever. The message should be loud and clear that Cyprus belongs to the countries with a clear European direction and does not belong to the countries that are fighting against Europe and European integration,” he said.

Socialist Edek leader  Marinos Sizopoulos said the European Union “with proper handling and unity can protect our sovereign rights and our homeland,” adding that this is the time “to promote everything that unites us”.

“We believe that through proper planning and the unity of political forces we can promote financial and political measures to the EU to deter Turkish provocations,” he added.

Greens leader Giorgos Perdikis expressed hope that citizens would exercise their right to vote despite the fact that the political parties “once again have failed to give the Cypriots the right to vote horizontally”.

“Nevertheless, I believe that the citizens will take the case of democracy into their own hands and participate in the election process, stating that they are present and demanding their future, their own future within a united Europe, a united Cyprus,” he said.

Citizens’ Alliance’s Giorgos Lillikas said: “Decisions concerning us, decisions that affect our lives, are taken at the European Parliament, and that is why I call on all Cypriot citizens to participate in the elections, to vote freely, far from extremities, with mutual respect, to vote and choose those they believe are the best to represent us at the European Parliament, those they consider to be the most suitable to promote our rights, to strive and demand our rights, and for a better democratic European Union with democratic freedoms, which will be interested in the people and the citizens.”

Cyprus voter turnout 7.3 per cent at 10am