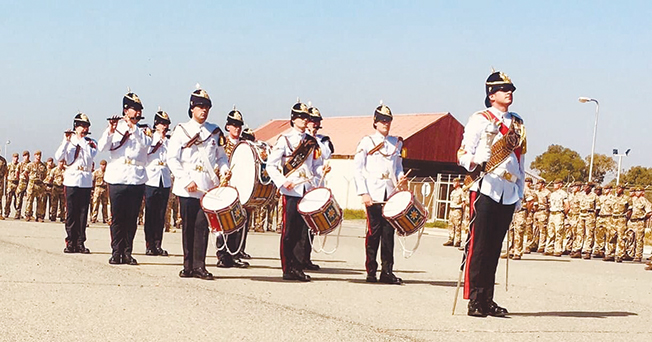 The Talavera Day celebration is an opportunity to mark the battle against the French in 1809 – 2 Royal Anglians still wear the name on their colours and collar badges of their uniform. The Poachers are preparing to leave the island to return to the UK after a frenetic two years posted to the Alexander Barracks in the Eastern SBAs

Commanding Officer of the 2nd Battalion The Royal Anglian Regiment, Lieutenant Colonel Bruce Weston, paid tribute to his soldiers, their families and the Sovereign Base Area community in Dhekelia during the Battle of Talavera commemoration last week.

His words come as the ‘Poachers’ prepare to leave the island to return to the UK after a frenetic two years posted to the Alexander Barracks in the Eastern SBAs.

The Talavera Day celebration, whilst being an opportunity to mark the battle against the French in 1809 – 2 Royal Anglians still wear the name on their colours and collar badges of their uniform – also gave the CO the chance to reflect on the past two years in Cyprus.

He said: “The two years have passed by at a frantic pace and during that period we have deployed on five overseas exercises on three different continents. Over 200 soldiers have taken advantage of the excellent adventure training opportunities and most recently we have deployed 50 soldiers in support of operations in Bahrain.

“Whilst all these military activities have been ongoing we have developed a thriving Poachers’ Wives Club; vibrant messes and entered and won competitions across multiple sporting disciplines.”

With such a busy tour under their belts, the CO was also keen to look back at some of the challenges and ultimate successes his troops have faced and overcome.

He continued: “Being part of British Forces Cyprus and living in the SBAs is unique. The military operations, both the Regional Standby Battalion and Cyprus Security Duties are critical in our support to BFC and wider Defence.

“The professionalism and dedication by all our soldiers to support these operations is something that I am immensely proud of. Of equal importance and if not more challenging, has been the welfare of our soldiers and their families. It is a real challenge in getting the work-home life balance right to allow them to truly enjoy Cyprus. The improvements to the welfare facilities and the approval of plans to build a new school are important steps in ensuring Dhekelia Station remains a home from home for us well into the 21st century.”

Lt Col Weston has also faced some unique challenges of his own after his role saw him take over the position of Station Commander – a first for a battalion CO in Dhekelia.

Having embraced the position, he was able to forge close ties with not only his military community but also the Cypriots living and working within the ESBA.

He said: “As Station Commander I have had the opportunity to attend many local festivals and meet many of the local community which have further enhanced our relationships.

“Living overseas, away from the support of family and friends can have its challenges, especially for the younger members of our Regimental family, however, the openness and friendship offered by the local community has been immense and I can truly say that this support has created lifelong friendships.

“Whether it’s our sons and daughters playing together at the local football clubs in Xylotymbou and Ormidhia, or several thousand members of the local community attending the Dhekelia Station fireworks night, these events create a bond between the two communities.”

And in a final message to those he has lived and worked with, he said: “I would like to thank all our Cypriot friends and colleagues within the SBAs. Your generosity and kindness have made our soldiers and families feel truly at home.

“Without your tireless commitment and support it would be a real struggle to achieve our role in delivering security and supporting strategic communications in support of Defence.

“It has been a true pleasure to serve and live in the ESBA and we look forward to continuing our work with BFC and the local community in four years’ time.”