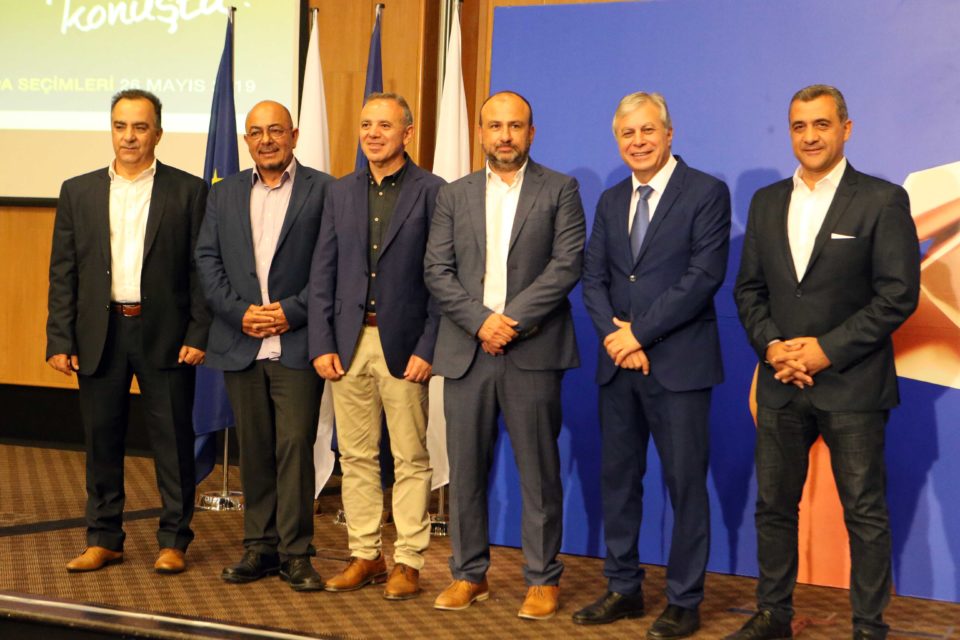 Cyprus’ six newly-elected Members of the European Parliament pledged to work to promote the national problem and the issues facing the people on the island.

Europe is offering us a lot of weapons we can use on to improve the daily lives of Cypriot citizens, said  the Democratic Rally’s newly elected Member of the European Parliament, Loukas Fourlas.

A journalist by profession, he thanked those who voted him to represent their ideals.

Speaking to reporters before his official declaration at the Filoxenia Conference Centre in Nicosia, Fourlas said that he is not a politician, nor will he become one. My sole purpose is to offer to society, to my country Cyprus”.

Lefteris Christoforou also of DISY, was re-elected MEP. He assured reporters that he will continue to challenge with determination, the rights of Cyprus.

He thanked all those who took part in this celebration of democracy for Europe, adding “Europe is our home and we ought to be there, participate and challenge”.
The first Turkish Cypriot elected to the European Parliament, Niyazi Kızılyürek of left-wing AKEL party said his election to the EP bears special significance not because he is the first Turkish Cypriot to be elected but because it was done through a Greek Cypriot-Turkish Cypriot partnership.

He told CNA that this by itself is special, adding he is very pleased with the results.

Newly elected MEP, Giorgos Georgiou, who is serving as deputy for AKEL, said amongst his priorities will be the Cyprus problem and Cyprus’ Exclusive Economic Zone, adding that all MEPs together should point out the need to protect Cyprus’ sovereignty in its EEZ.

He also said absenteeism should not be dealt with on the surface but a deeper look into the issue is necessary to effectively address the problem.

Re-elected MEP for the Democratic Party, Costas Mavrides said that while the occupation of European territory, Cyprus continues, so will the fight for freedom continue.

He said that for this reason, all Cypriot MEPs should have the Cyprus problem at the top of their agenda.

Demetris Papadakis of Socialist EDEK, who was also re-elected MEP, said today was a victory for democracy.

Invited by CNA to say what message he wants to send, Papadakis replied “it was a very hard battle”.