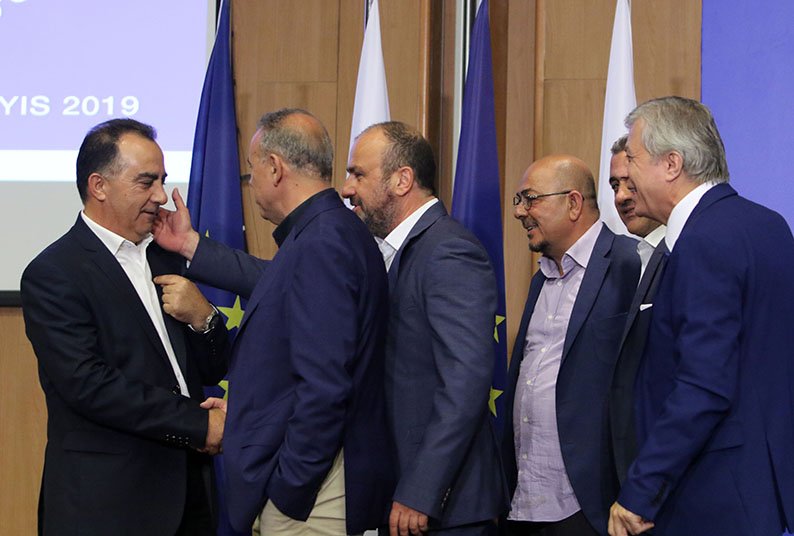 Winning candidates congratulating each other after Sunday's victory

Cyprus is sending three new faces to Brussels, one of them the first-ever Turkish Cypriot MEP but the main takeaways from Sunday’s Euro elections were the more worrying state of voter apathy towards Europe, and a surge in numbers for the nationalist party, despite clear wins for establishment political forces.

National People’s Front (Elam) saw a surge in voters on Sunday, almost tripling its support compared with the 2014 Euro elections, and doubling its percentage share since the 2016 Cyprus parliamentary elections.

At the same time, turnout on Sunday stood at 42.8 per cent, which was 1.17 per cent lower than the European elections in 2014, and the lowest-ever turnout of voters in Cyprus for any election.

Ruling Disy, as predicted, came out on top at 29.02 per cent – though it was a significant drop from its 2014 results of some 37 per cent. Opposition Akel trailed two percentage points behind Disy on Sunday at 27 per cent, a small increase of around 1 per cent since the 2014 European elections.

The leaders of both parties expressed concern over the upward trajectory of Elam, and the rate of abstentions, and warned that the political arena needed to take heed of the messages society was sending to its politicians.

Centre-right Diko came in third on Sunday with 14 per cent of the vote, socialist Edek with 11 per cent, Elam with 8 per cent, Dipa, the party of former Diko leader Marios Garoyian at 4 per cent and the Greens-Citizens Alliance with 3 per cent. The Yiasemi (Jasmine) party of Turkish Cypriot Afrika publisher Sener Levent received 2 per cent of the vote.

Though the main results were out around 8.30pm on Sunday, the winners of the race were not announced until midnight in line with other EU countries. Disy’s two seats went to ‘newbie’ and journalist Loucas Fourlas who garnered the highest number of votes from all 72 candidates with 43,156 votes. Second was Disy incumbent Lefteris Christoforou with 39,616 votes.

Akel will also send two MEPs to Brussels, both new faces. These are Giorgos Georgiou who received 27,063 votes and Turkish Cypriot academic Niyazi Kizilyurek who got 25,051 votes. Returning to their MEP seats will be Diko’s Costas Mavrides with 21,155 votes and Edek’s Demetris Papadakis who received 11,789 votes.

In the early hours of Monday, all six pledged to work for Cyprus in their roles as MEPs.

“I think it’s a special case in itself,” he said. “It shows that there many people in our country who are ready to work together for a better Cyprus, for a better Europe.”

The government said on Monday it was counting on the Cypriot MEPs to promote Cyprus’ positions, spokesman Prodromos Prodromou said.

“The government counts on their action in unity, to serve the common goals as in the past, defending the Republic of Cyprus’ positions as regards the problems which the Turkish side has been creating using various means and ways,” he added.

It was also “very important to now pave the way for the future of Europe which is currently facing a series of challenges”, he said, adding that President Nicos Anastasiades would be attending the informal European Council in Brussels on Tuesday.

Anastasiades, in a written statement following the elections, called for cooperation and invited everyone to work to handle the threats Cyprus was facing and continue efforts to resolve the Cyprus issue. He congratulated the candidates adding: “I am sure that they will work together for the interest of Cypriot people”.

At the same time, however he said it was “disturbing that a large portion of our compatriots chose to abstain, a phenomenon that must be of serious concern at Cypriot and European level”.

Anastasiades also said he was pleased with the increased participation of Turkish Cypriots but did not address the issue of Elam.

“The elections are over.  From tomorrow what matters is everyone’s cooperation, so that we can efficiently cope with any threats our country faces, to continue efforts to resolve the Cyprus problem, and together proceed with the necessary reforms that will make our country worthy of the expectations of our people,” he concluded.

Disy leader Averof Neophytou, speaking at party headquarters after meeting President Nicos Anastasiades as the count came to a close on Sunday night, said the election results were a validation of the ruling party’s policies, ensuring the party remained the main political force on the island.

“Our goal was not easy but it’s the sixth consecutive victory for Disy since 2013,” he said. Referring to Turkish aggression, he added: “It’s critical we strive for political unity for the good of the country. In this, the European course of our country is clear.”

Akel leader Andros Kyprianou, in his statements to a crowd of jubilant supporters at the party offices in Nicosia, said the party had attained its goals for the European elections.

“As much as they fight us, no matter how they attempt to destroy us, you are the future,” he said, addressing the crowd.

He also said the party would try to tackle voter abstention, and said “peace in Cyprus cannot be hindered”, in reference to the party’s cooperation with Turkish Cypriots, before making a dig at the ruling party.

“Disy is now called upon to draw its conclusions from its decline by almost 10 percentage points over the past European elections,” said Kyprianou. “This is a decline that sends out the clear message of the popular mandate for a change of course in Cyprus and Europe.”

He accused Disy of showing its real face during the campaign by scaremongering.

“Even worse, it sowed suspicion against our Turkish Cypriot compatriots. We endured this dark propaganda and the Cypriot people have sent a message of unity and hope for the future of our homeland.”

Both Kyprianou and Neophytou warned however that the political sphere in Cyprus needed to analyse how and why a party like Elam was gaining ground, and called for some introspection by the parties into the “birth of this phenomenon”.

Nadal back to his old merciless self, easy for Djokovic