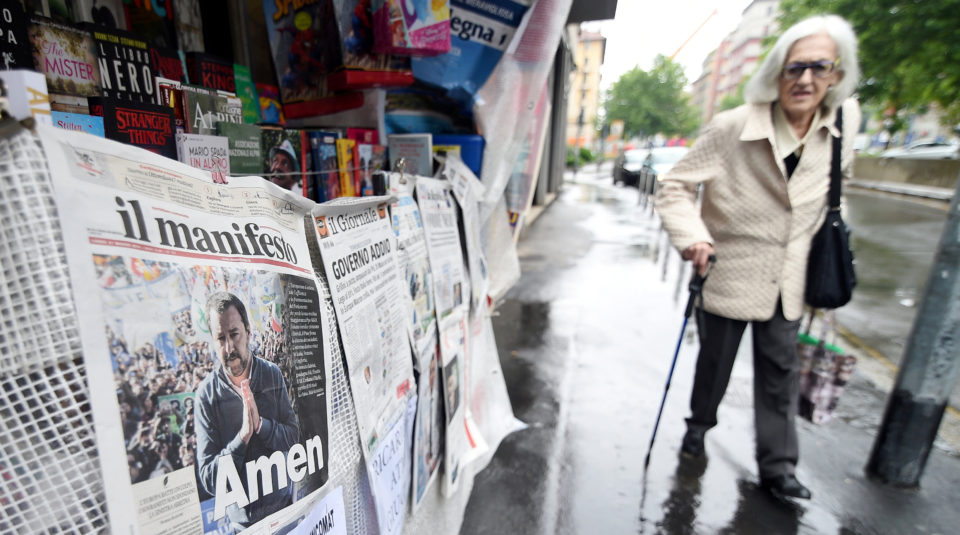 Victory for Italy’s League in European elections gives the far-right party a mandate to push through tax cuts and fight for changes to the EU’s budgetary rules, its leader, Deputy Prime Minister Matteo Salvini, said on Monday.

Salvini’s party won 34.3% of the vote at Sunday’s election, doubling the score of its ally in the ruling coalition, the anti-establishment 5-Star Movement, which took just 17.1% and was pushed into third place by the centre left.

“The time has come to totally re-discuss old and outdated rules that have hurt Europe. Otherwise a vote like this cannot be explained,” Salvini said at a news conference in Milan.

Salvini, who spent much of the election campaign promising deep tax cuts in possible defiance of EU fiscal rules, showed no sign of backing down. Lower taxes were “the key issue” for Italians and would be the foundation of next year’s budget to be presented in the autumn, he said.

Earlier on Monday, he held out an olive branch to 5-Star and ruled out a cabinet reshuffle despite his coalition partner’s disappointing result.

“For me our government allies are friends and from tomorrow we will get back to work with serenity and softer tones,” he told reporters. “My opponent is and remains the Left,” he said, referring to the Democratic Party, which won 22.7% of the vote.

The acrimonious election campaign, during which the League and 5-Star traded sharp attacks, had fuelled speculation that a League victory and 5-Star failure could trigger a collapse of their year-old coalition.

For his part, 5-Star chief Luigi Di Maio blamed his party’s defeat on a low turnout in its southern strongholds, and also ruled out a cabinet re-shuffle.

“Nothing will change and we will get going again from today,” he told daily Corriere della Sera, adding that he expected to govern with the League for a full five-year term.

Italy, with public debt proportionally the second largest in the euro zone after Greece’s, clashed with the European Commission last year over its big spending plans.

Salvini said he understood that Brussels had sent Rome a new warning letter on its public finances.

“If it asks for cuts we will say no,” he said, adding that he was “convinced” that the new Commission, expected to be installed in November, would be “more friendly” towards Italy.

It remains to be seen whether he is right. Although eurosceptic and nationalist parties saw strong gains at the election, pro-European parties retained a firm grip on the EU parliament, provisional results showed on Monday.

Italian government bond yields showed little reaction to the election. The closely-watched spread over German Bunds hovered around 270 basis points on Monday, virtually unchanged from the end of last week, while Italian shares were buoyed by a proposed merger between Fiat Chrysler and Renault.

The League’s victory and 5-Star’s poor showing inverts the result of national elections a year ago. Despite Salvini’s business-as-usual remarks about the coalition, it would be a surprise if he does not use it to push his own party’s agenda.

Aside from tax cuts, this will probably mean more autonomy for northern regions where the League is strongest, and efforts to accelerate infrastructure projects including a contested high-speed rail-link between Turin and Lyon.

Salvini insisted neither party held the whip hand in the government and reiterated he would respect the policy “contract” which was the basis of the coalition formed 12-months ago. Yet some other League figures seemed less generous in victory.

“Deciding the priorities of the government will now be up to Matteo Salvini and the League,” said the League’s lower house leader, Riccardo Molinari.

The poor showing for 5-Star may encourage dissent towards Di Maio, who is likely to face pressure not to make concessions to Salvini which might further erode grassroots support.

“In the short term it’s not in either side’s interests to break up the government, and they will try to find stability,” said Alessandra Lanza, from the Bologna-based economic consultancy Prometeia.