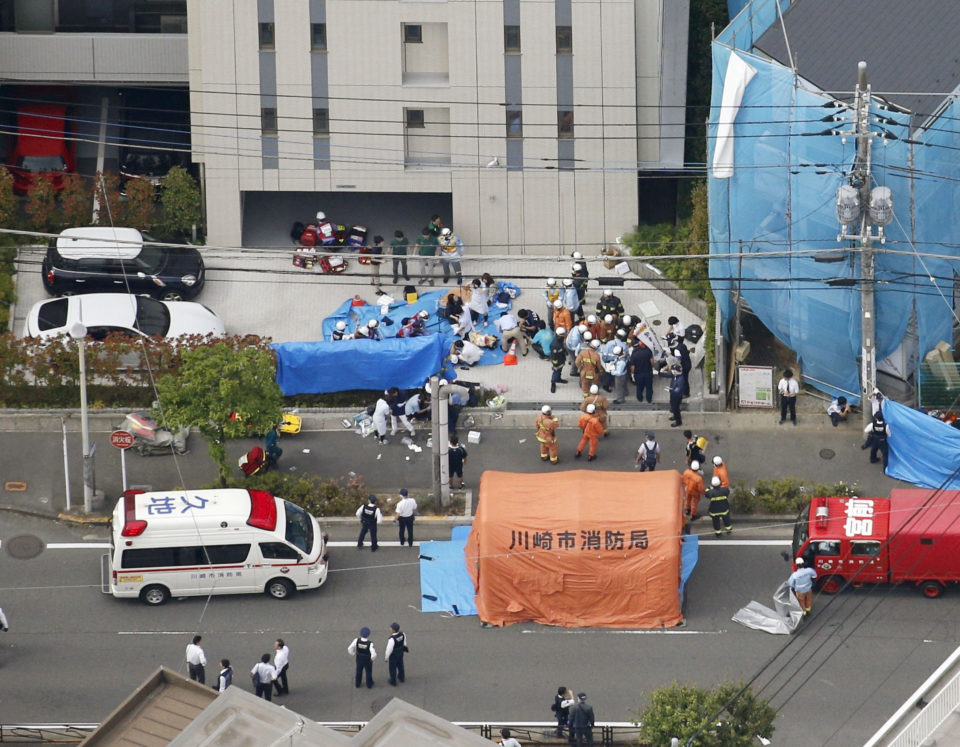 An aerial view shows rescue workers and police officers operate at the site where sixteen people were injured in a suspected stabbing by a man, in Kawasaki, Japan May 28, 2019. in this photo released by Kyodo. Mandatory credit Kyodo/via REUTERS ATTENTION EDITORS - THIS IMAGE WAS PROVIDED BY A THIRD PARTY. MANDATORY CREDIT. JAPAN OUT. NO COMMERCIAL OR EDITORIAL SALES IN JAPAN. TPX IMAGES OF THE DAY

By Chang-Ran Kim and Kaori Kaneko

TOKYO, May 28 (Reuters) – A schoolgirl and an adult man were killed and 15 other young girls injured in a stabbing at a bus stop just outside Tokyo on Tuesday, Japanese national broadcaster NHK cited authorities as saying, and another man detained at the scene also later died.

The girls, aged between 6 ands 12, were students at a private Catholic school in Kawasaki city, south of Tokyo, and were boarding their school bus when the suspect attacked them, according to NHK.

The driver of the Caritas Elementary School bus told police he saw a man approach the bus stop and start slashing at people, holding a knife in both hands, the broadcaster said.

It said the girl who was killed was aged 12. A 39-year-old man was also killed and another woman was severely injured along with the 15 other schoolgirls who were hurt, NHK said.

A suspect was detained at the scene after stabbing himself in the neck but died later, NHK cited police as saying. It said the man, a Kawasaki resident probably in his 50s, was unconscious when he was detained.

The motive for the attack was not yet clear but there were no immediate fears of a wider security threat. There have been previous examples of mass stabbings in Japan, sometimes involving the vulnerable.

“On behalf of the First Lady and myself, I want to take a moment to send our prayers and sympathy to the victims of the stabbing attack this morning in Tokyo,” Trump said as he toured Japan‘s largest warship, the Kaga.

“All Americans stand with the people of Japan and grieve the victims and for their families,” he said.

TV footage showed scores of police officers and emergency vehicles at the crime scene, with large areas cordoned off.

A witness told NHK he saw people lying on the ground covered in blood and one police officer was seen hosing down the sidewalk.

“I saw a boy carrying a school bag with scratches on his face, wrist and legs in a parking lot,” NHK quoted an unidentified witness as saying.

“He was visibly trembling – frightened and shocked.”

The girls’ school was located just over a kilometre from the scene of the attack, NHK said.

Violent crime is relatively rare in Japan but occasional high-profile incidents have shocked the nation.

A knife-wielding man broke into a facility for the disabled in a small town near Tokyo in 2016 and killed 19 patients in their sleep. In 2001, eight children were stabbed to death by a former janitor at their school in Osaka.

More than a dozen people were injured in a 2010 stabbing spree on a school bus and a commuter bus in a Tokyo suburb.