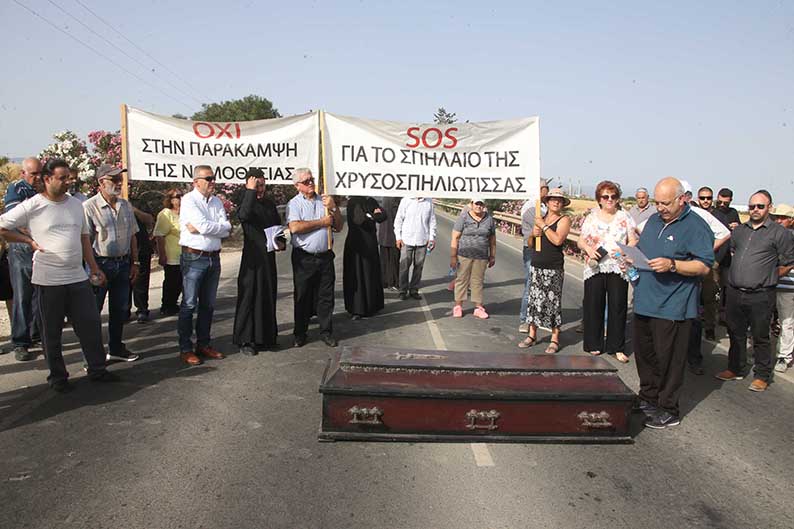 Scores of residents of Deftera village on Wednesday prevented the construction of a petrol station just a few metres from the cave that houses a church dating to the 1st century AD and threatened more serious protests unless plans to build there were scrapped.

Local residents and members of the Green party gathered at the construction site and blocked the road with a coffin after word got out that work on the petrol station, temporarily halted in March, would resume on Wednesday.

The works stopped last March after strong protests by the committee of  the church of Panayia Chrysospiliotissa and local residents who expressed concerns over the possible collapse of the cave from the tremors caused by the use of machinery. The church is classified as a type B monument.

The church’s priest, Father Haralambos, told media that the business owner keeps breaking the law but there is no-one to stop him

“They removed the metal fence without any permit and entered the plot with heavy machinery through a sidewalk, since there is no access to the plot,” he said.

He said that there is a case pending at the Supreme Court but the transport minister did not ask for the construction works to be postponed until after the ruling.

“Despite this, they have permission to carry on, how is this possible?” the Father asked.

“There is no one to tell them anything,” he said.

Protesters vowed to return on Thursday.

“I don’t know how long the protest will be a peaceful one.  Residents are furious, they say they will allow this only over their dead bodies,” he said.

The matter was discussed at the House transport committee last March. Transport Minister Vasiliki Anastassiadou had said at the time the government was determined to protect the cave of Chrysospiliotissa church.

She said that works had been halted pending a study by the geological survey department and that regardless of the decision concerning the construction of the petrol station, the area would either be declassified as residential to avoid development, or there would be an expropriation of land.

The Tamassos Bishopric, under whose authority the church lies, questioned assessments by state officials that recent cracks that appeared within the cave and rock slides were due to the heavy rainfall.

A representative of the bishopric told MPs at the time that since 2002 when conservation works at the cave were completed, no cracks had been noted until construction started on the petrol station.

He also said that the parish church committee was willing to offer to the businessman another plot to build the petrol station on.

US Special Counsel Mueller says charging Trump was ‘not an option’