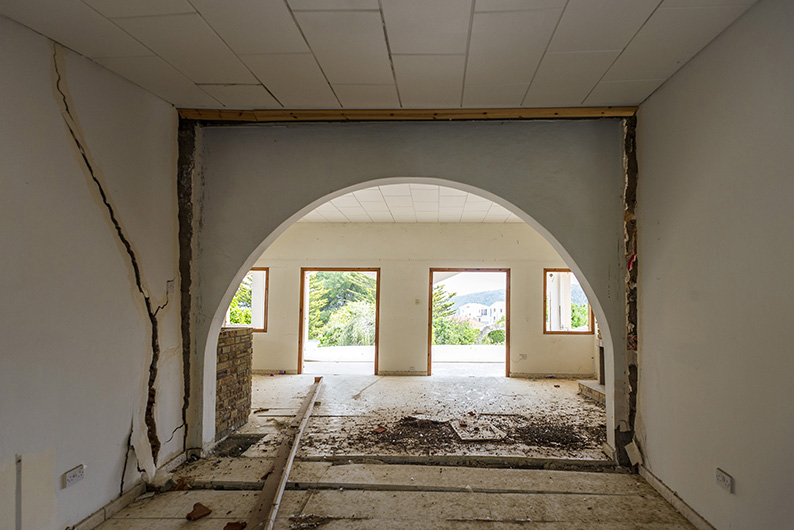 The destroyed interior of one of the Pissouri homes

HOMEOWNERS in Pissouri are entitled to seek compensation from the government for the damage caused to their homes by a landslide. The landslide, according to Cyprus Geological Surveys Department and experts brought in, was triggered by uncontrolled groundwater, leading owners to argue, with some justification, that this was an uninsurable ‘natural disaster’ and the state had a responsibility to compensate them. The state should accept the responsibility of ‘insurer of last resort’, one of the owners argued in a letter published in the last issue of the Sunday Mail.

So far, the government has avoided engaging with the owners, the implication being that it has no responsibility for what has happened in Pissouri. Any idea of some dialogue taking place between the two sides was killed after the auditor-general Odysseas Michaelides decided to intervene. In April he declared the homeowners were not entitled to compensation because destruction of the homes in the area was caused by shoddy construction work and was therefore entirely the fault of the developers or architects. What ministry or government department would entertain the idea of examining the grievances of the Pissouri home owners after Michaelides decreed that the damage to the houses was caused by human error?

As the letter to the Sunday Mail pointed out, all the existing evidence indicated that the damage was caused by a landslide triggered by uncontrolled groundwater. This was also the verdict of the state services, which the auditor-general appeared not to have consulted before advising that the home owners’ claims for compensation were unjustified. His position appears to have determined the government’s stance, which will lead to Cyprus being portrayed in negative light yet again. The Pissouri homeowners have already alerted British newspapers to their plight.

After the years of negative publicity regarding the title deeds issue which has still not been resolved, Cyprus did not need more property-related bad press. State services should have engaged in dialogue with the homeowners over how to resolve the matter. It is entirely possible that any state compensation offered may well have been deemed inadequate, but at least nobody could have been able to accuse the government of showing indifference to the plight of the Pissouri residents. Ignoring the issue is the worst policy as it will not make it go away. Nor is the auditor-general’s unsubstantiated ‘verdict’ a defence in any way.

The matter of compensation will most probably be decided in the courts, but the government could have tried to limit the damage done to the country’s image, which has been battered over the title deeds, by engaging in a discussion with the homeowners instead of ignoring them.