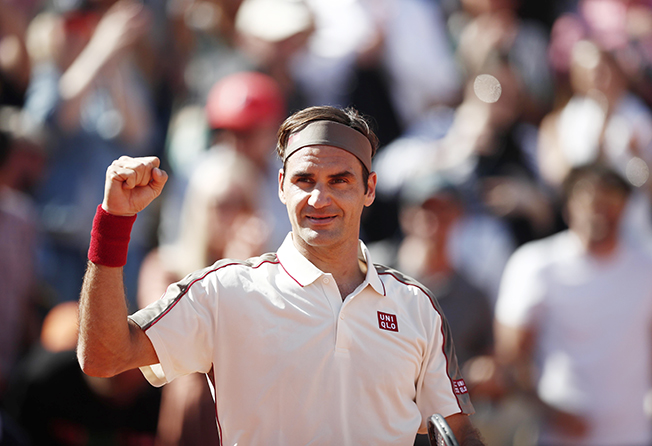 Playing in his 400th Grand Slam match, the 37-year-old Swiss legend became the oldest male player to reach the fourth round at the French Open in almost 50 years

Roger Federer eased past Norway’s Casper Ruud 6-3 6-1 7-6(10-8) on Friday to become the oldest male player to reach the fourth round at the French Open in almost 50 years.

Playing in his 400th Grand Slam match, the 37-year-old showed little mercy to his 20-year-old Norwegian opponent, whose father Christian reached the third round when Federer first played on the ‘terre battue’ of Roland Garros as a wild card entrant in 1999.

Federer needed little more than an hour to pick up the first two sets, but a rare lapse in concentration allowed Ruud, ranked 63 in the world, to pick up an early break in the third set.
The Swiss reeled the youngster back in, forcing the game to a tie-break where he squandered three match points before winning 10-8.

As he signed autographs at the end, a female fan said: “Roger, I’ve never seen you sweat before, this is crazy.” Federer quipped back: “I know, I don’t know what’s going on, I must be getting old!”

Federer is making his first appearance at Roland Garros since he reached the quarter-finals in 2015. He withdrew from the event in 2016 and missed the entire clay court season in 2017 and 2018 to focus on grass.

Defending champion Rafael Nadal dropped his first set at this year’s French Open but stayed firmly on course for title number 12 with a 6-1 6-3 4-6 6-3 defeat of David Goffin.

Nadal began at a frightening pace and dropped one point on serve in the opening set and try as he might Goffin could not get much closer to the marauding Mallorcan in the second.

It had looked like the boxing equivalent of a heavyweight taking on a lightweight, but Goffin showed some steel to go with his silky strokes to punch his way back into contention.

With the crowd offering the Belgian plenty of backing, he broke Nadal’s serve out of nowhere at 4-4 and then held to extend the contest into the early evening sunshine.

It was 10 years to the day that Nadal lost to Robin Soderling, one of only two defeats he has suffered in Paris during his long reign as the king of clay, but any flicker of hope Goffin had of making it three was quickly extinguished.

Nadal, realising he was suddenly in a battle, stamped his authority back on the contest and opened up a commanding lead in the fourth that he never relinquished.

The second seed finished if off on his first match point when Goffin skewed a backhand wide.

Spaniard Garbine Muguruza laid down an impressive marker at the French Open as she overpowered ninth seed Elina Svitolina 6-3 6-3 to reach the fourth round on Friday.

The 19th seed has struggled for consistency this year but Roland Garros tends to bring the best out of her and so it proved again as the 2016 champion outplayed the Ukrainian on a sunny Court Philippe Chatrier.

Muguruza made her intentions clear from the start, planting herself on the baseline and blazing away with her baseline power-game that Svitolina struggled to contain.