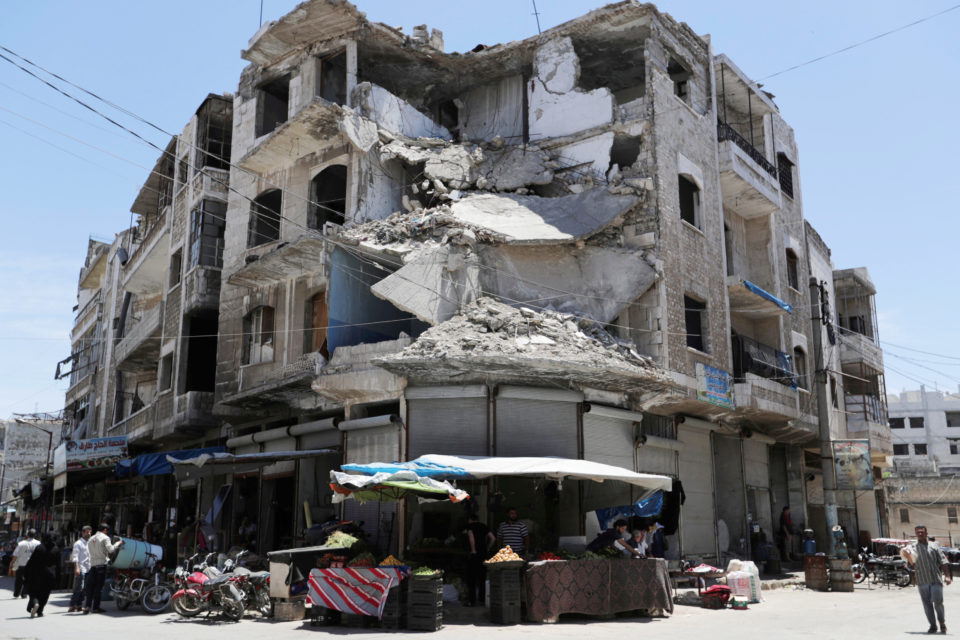 People walk past a damaged building in the city of Idlib, Syria

The Kremlin said on Friday it was Turkey’s responsibility to stop rebels in Syria’s Idlib province from firing on civilian and Russian targets, signalling it would continue to back a Syrian government offensive there despite Ankara’s protests.

The month-long offensive, the biggest escalation of the war between President Bashar al-Assad and his insurgent enemies since last summer, has raised fears of a humanitarian crisis as thousands of people shelter from air strikes at the Turkish border.

Turkish President Tayyip Erdogan told his Russian counterpart Vladimir Putin late on Thursday that he wanted a ceasefire in Idlib to prevent more civilian deaths and a refugee influx to Turkey.

The Turkish leader has repeatedly complained to Moscow about a Russian-backed Syrian government offensive in the rebel-held northwest, the last significant rebel stronghold.

Syrians uprooted by the fighting protested on Friday at the Atmeh crossing into Turkey, calling for an end to the strikes and for Ankara to open the frontier, which it refuses to do.

Abou al-Nour, an official at the Atmeh camp which is already overflowing with displaced people, said more than 20,000 families were now sleeping in an olive grove near the border.

“They don’t have any shelter or water, and this is beyond our abilities. We are doing all we can,” he told Reuters.

The Kremlin made clear on Friday however that it was for now unmoved by Erdogan’s calls for a ceasefire, saying the rebels were the ones who had to implement a ceasefire.

“We really do need a ceasefire in Idlib and what needs to be achieved is for the terrorists to stop firing on civilian targets and on certain facilities where our troops are located,” Kremlin spokesman Dmitry Peskov told reporters when asked about Erdogan’s request for a ceasefire.

“…This is the responsibility of the Turkish side.”

Russia has complained of rocket and drone attacks against its main Hmeymim air base being launched from Idlib, something Peskov described as “a highly dangerous tendency”.

He made no mention of the idea that Syrian government troops, backed by Russian air power, should stop fighting however, and denied Moscow and Ankara disagreed over Idlib.

The fate of the province has strained relations between Russia and Turkey, which is keen to retain a degree of influence there given its geographical proximity.

Russia, one of the Syrian government’s staunchest allies, and Turkey brokered a deal in September to create a demilitarised zone in Idlib that would be free of all heavy weapons and jihadist fighters.

But Moscow, which is keen to help Assad retake territory, has since complained about escalating violence in the area and said that militants who used to belong to the Nusra Front group are in control of large tracts of territory.

It has blamed Turkey for not doing enough to hold its side of the bargain, while Ankara, which is worried about refugees crossing from Idlib into Turkey, has repeatedly urged restraint.

The United Nations said last week that more than 200,000 people had fled the violence since the government offensive began at the end of April. The Union of Medical Care and Relief Organisations (UOSSM), which provides assistance to health facilities, put the number at more than 300,000.

Many of those who have fled had already been displaced from their homes earlier in the war, sometimes fleeing time after time as the battles moved and frontlines shifted.

French court sentences Briton in absentia for murder in Ireland