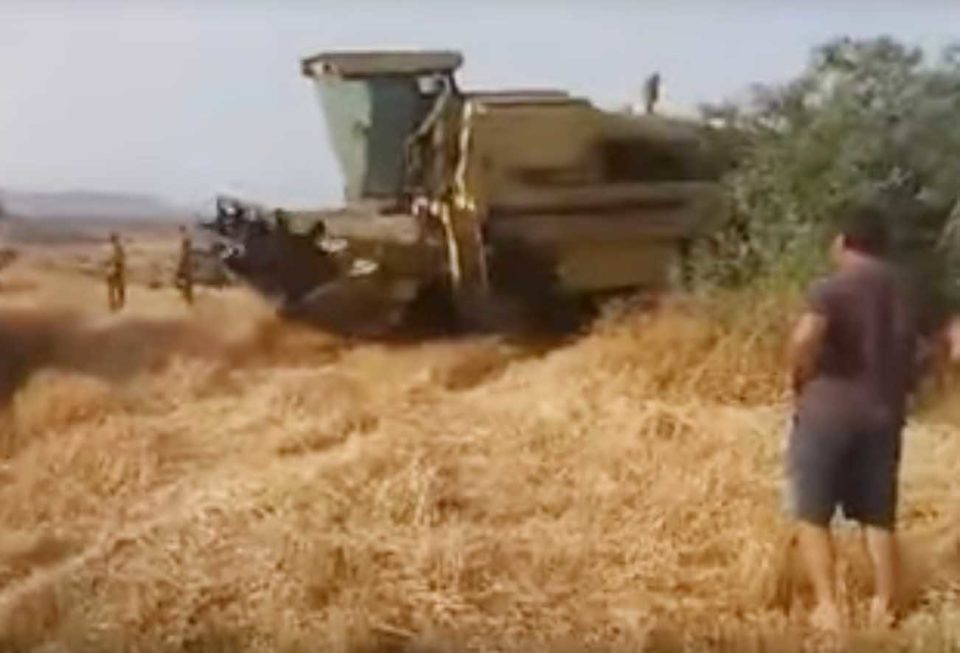 Unficyp on Friday said the peacekeeping force was dealing with heightened tensions in Denia after agricultural machinery entered from the north side of the buffer zone and began harvesting a wheat crop sowed by Greek Cypriot farmers on Thursday.

At the same time, the foreign ministry said on Friday it was lodging representations with Unficyp over the incident.

“We are liaising with both sides to address the raised tensions in the area,” UN spokesman Aleem Siddique said on Friday. “Maintaining the status quo in the area is our most important priority.”

According to media reports Turks, believed to be settlers, accompanied by unarmed Turkish armed forces began harvesting their crops. TV footage on Sigmalive showed a Greek Cypriot farmer standing close to a moving harvester shouting “thieves, thieves” as it continued to mow down the wheat crop.

Denia community leader Christakis Panayiotou said the Turkish forces that had accompanied the harvester were not armed, but others further back, around 50 or 60 metres away, were.

He said the people attempting to harvest the crops were likely to be settlers as the neighbouring villages of the area, Avlona and Filia, are mostly inhabited by Turkish settlers. He said the Greek Cypriots living in the area do not have a problem with Turkish Cypriots.

So far, on Friday all was quiet, he told news channels. However, Panayiotou believes more has to be done to solve the situation. “The foreign ministry must inform Europe,” he said. “Such small problems can escalate into big ones.”

One farmer told media: “One cannot describe the  feeling when you see the Turks reap your crop.”

“We cultivated this land for the past five to seven years at risk of our lives. For 35 years before that this land was uncultivated and we cleared it. The Turks have now found them clean and ready and they came and took the crop.”

The foreign ministry in a statement said it was lodging representations with the UN peacekeeping force and has been following developments closely from the first moment.

“The primary objective of the actions of the authorities of the Republic is, as always in such cases, the immediate restoration of farmers’ rights and the unimpeded access and cultivation of their land within the buffer zone in full security,” the announcement said.

“We need to remain calm in the face of such provocations,” he said, adding that the government was watching and monitoring the situation.

This was not the first time there have been issues in Denia. Similar incidents were reported last November. At the time it was suggested but not confirmed that the Greek Cypriot farmers did not have permits and had begun cultivating too close to the Turkish ceasefire line, for which permits are not granted.

Denia was a mixed village prior to the intercommunal troubles in the 1960s. In 1974 Greek Cypriots fled the village, while Turkish Cypriots were relocated north with the former returning to the area after hostilities ceased.

Is there any truth to the suburban dream?

The stories of people who passed through