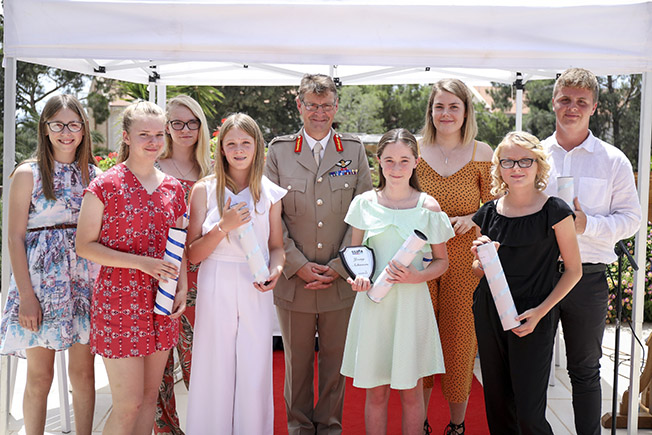 The annual SSAFA Young Achievers Awards took place at Flagstaff House in Episkopi last week with individuals and groups of young adults honoured for their outstanding accomplishments within the British Forces Cyprus community over the past year.

The prestigious Young Achievers Awards, which began in 2011 in Cyprus, has become a standout day for the BFC community and according to CBF, it always gives him a great sense of pride in the youth living on island.

He said: “It is a great privilege to present at the SSAFA Young Achievers. It was a tremendously happy occasion with some wonderfully brave, selfless and inspiring children and young adults and I would like to say well done to them all.”

Those achievements, as in previous years, varied wildly, with children of all ages being recognised for multiple accomplishments, including overcoming illnesses, achieving sporting excellence and charity work.

SSAFA General Manager in Cyprus, Jan Dowlen-Gilliland, was overjoyed with the achievements, saying: “I have had a fantastic day. I have worked for SSAFA for 20 years and we have been doing the Young Achievers Ceremony for 20 years.

“We started in Germany and then we have moved onto Cyprus, so I have seen an amazing number of brave young people who have come through such adversity without any real fuss and that is coupled with people who have gone that extra mile to help others.

“We have heard about the charities that these young people work with and they are all such selfless acts and in today’s world where we hear so much about how terrible the youth of today are, this is a real opportunity to say ‘actually, we have some really wonderful young people’.

“I feel they are all indicative of BFC children and what has struck me most is the transparency. We have heard some really sensitive information about some of these young people but they are so open about it and they don’t mind it being talked about.
“It makes me very proud to be part of SSAFA and that has not changed for the past 20 years.”

One of the children honoured last week, was Freya Collinge and according to her mother, Tori, it was a proud day for all of the family and the BFC community as a whole.

She explained: “I am a very proud mummy because Freya has received an award for performing in music. She gives her all in absolutely everything that is put in front of her, both in a singing and on a performing basis and it is really nice to see her recognised.

“I think it is utterly amazing to see them (the children) recognised. There are so many children out here coping with big moves, leaving friends and family behind in the UK and for them to be recognised for something that they do that is over and above and special, is really good.”

Nine-year old Isabelle Niblett from Ayios Nikolaos was nominated for her heart-warming charity work and it was clear that she was a worthy recipient.

Speaking after receiving her award from CBF, she said: “I painted some poppies on shells which we found on the beach and I put a table outside of my house and sold them to raise €76 for the Poppy Appeal.

“I also did the Run in Colour in Limassol and we raised €405 for St Mary’s Hospice because it looked after my great grandma, Mary.”

Her mother, Emma, unsurprisingly, was overjoyed with her daughter’s award: “I am very proud of her and so is her father and it is lovely that SSAFA recognises the children in this community.”