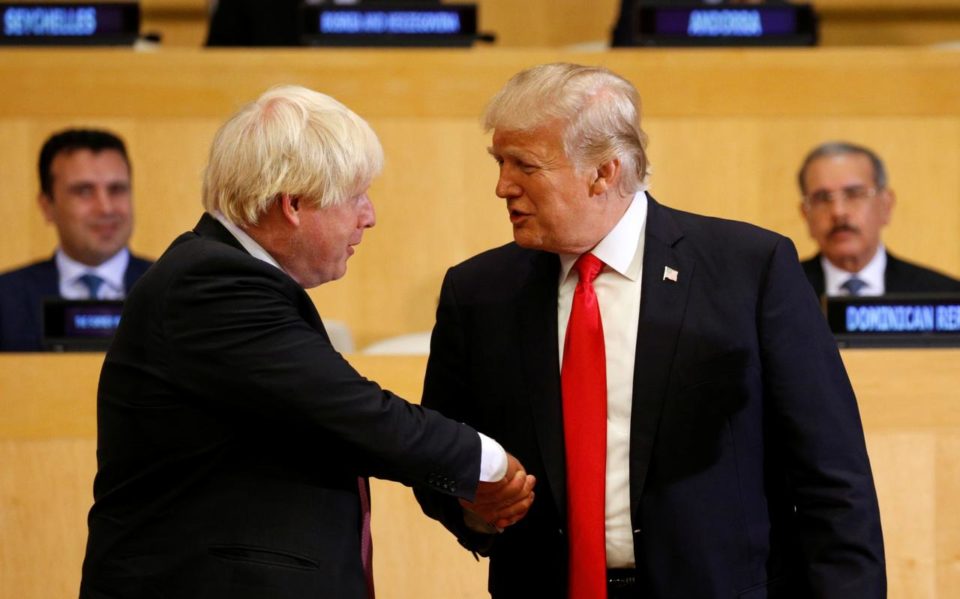 PRESIDENT Donald Trump is coming to London town on a state visit next week.  He will sup with HM the Queen and talk the talk and tweet the tweet, and celebrate D-Day. He wants to meet Boris Johnson and has caused controversy among those competing to succeed Theresa May as prime minister by saying he would do an excellent job. Excellent my foot!

There will probably be no time for a golf break in Scotland this time. There will be time to say goodbye to Theresa May and shed crocodile tears and remind her of the advice he gave her last time  to sue the EU – he is great I-told-you-so Donald Trump is, and, as he told his friend Rupert Murdoch’s Sun Newspaper last Friday, Britain did not play her cards right in the Brexit negotiations.

We do not have furthers and betters of the advice he gave May but the only glimmerings of a case is whether the EU’s claim that Britain has an obligation pay £40 billion to withdraw from the EU is sound in law.

The advice to sue the EU came from the top of Trump’s head. But he must have meant it seriously because he repeated it more recently when May got stuck over changes to the withdrawal agreement and had no leverage to press the EU for changes to the agreement.

So there you have it; Theresa May should have read the Art of the Deal by Donald Trump. Half of Trump’s charm is that he is very childlike. He tells the unvarnished truth as he sees it, unconstrained by the niceties that hold other grown-up leaders back.

Theresa May mocked his advice at the time but in hindsight he had a point. Or more precisely he would have had a point but for one insuperable obstacle. If to strengthen her hand in negotiations, Britain challenged the £40 billion divorce bill, it would have been in the Court of Justice of the EU.

Trump had not thought the advice he gave through, however, because the Court of Justice is the most unashamedly political court in the civilised world followed closely by the US Supreme Court that Trump knows is very political because he himself appointed judges to it in order change basic laws like a woman’s right to choose abortion.

The Court of Justice is at the vanguard of achieving an ever-closer Union and its judicial activism to achieve political union was one of the main reasons why Britain is leaving. So the idea that Britain had any chance of getting a case off the ground in the Court of Justice against the EU, let alone one based on leaving the EU on the cheap, is for the birds.

But the perversity of the advice Trump gave is not that it left out of account the political nature of the Court of Justice, but rather because it encourages politicisation of the law just when it is being politicised against him. And he should know better because last week both he and his new best friend Johnson have been victims of the political use of the criminal law by would-be prosecutors.

Trump was investigated for allegedly impeding the administration of criminal justice by special counsel Robert Mueller who said that if he had confidence that the president did not commit a crime, he would have said so in his report to the attorney-general. In the UK a District Judge ruled the other day that a private prosecution for misconduct in a public office could be brought against Johnson for an advertisement on a bus during the 2016 referendum campaign attributed to him containing a slogan to the effect that the UK was paying £350 million a week to the EU which it is alleged was a deliberate lie.

It is not possible to comment on Robert Mueller’s statement as the evidence against Trump is not in the public domain; but beware of lawyers who are prepared to injure but not to kill.

As for the case against Johnson, if all else fails the attorney-general will stop the prosecution as it is not in the public interest.  It is a no-brainer that if such a prosecution were allowed to proceed and Members of Parliament were done for telling porkies – porky pies lies – in the cut-and-thrust of political campaigning it would drive a coach and horses through the whole fabric of democratic politics. I have to say I am very surprised the District Judge did not throw the prosecution out as being an obvious abuse of the process of the court.

In his second Reith Lecture titled Law’s Expanding Empire last Tuesday, former Supreme Court Justice, Lord Sumption, who is both a historian and a lawyer, warned against the politicisation of law. His thesis was that judges these days are frequently asked to adjudicate in disputes that are essentially political and that this is bad for democratic politics and not good for the independence of the judiciary.

In the UK, judges are appointed from a pool of lawyers with many years of experience in successful practice. They have expertise in evaluating evidence, applying the law to the facts and where necessary developing the law in accordance with known principles, logic and precedent. As they are not elected, they are not accountable politically and represent no one. Their role is to hold the scales of justice in disputes that lend themselves to legal resolution.

In Lord Sumption’s view, politics in a representative democracy is very different. In politics there is room for many views and sentiments, and there is not always a right answer, and pragmatism and compromise and fudge are all par for the course.

Not for nothing has politics been labelled the art of the possible. Brexit is a political issue par excellence. So also is the election of an American president and that of a leader of the Conservative party and British prime minister. These are political events that do not lend themselves to legal decision-making because the voters make these decisions through the democratic process that by its very nature defies legal analysis. So as far as possible, the law should be kept out of the democratic process. Obviously, politics takes place in a legal context and politicians must play by the rules. But what I think Lord Sumption was concerned about is when the law encroaches into political territory where it has no place.

Law clearly has a place in judicial review of administrative action and in the protection of human rights. According to the European Convention on Human Rights justice is best achieved by maintenance of an effective political democracy on the one hand and the protection of fundamental human rights on the other. But the use of legal proceedings either to manipulate the political process or to reverse a political outcome is an abuse the process of the law for an oblique purpose.

This is not to say that political disputes can never be resolved in the courts. They often are as for example in cases of disputes between states on the lawful and equitable distribution of the sea’s bounty.

Uphill battle to curb the zealots of darkness