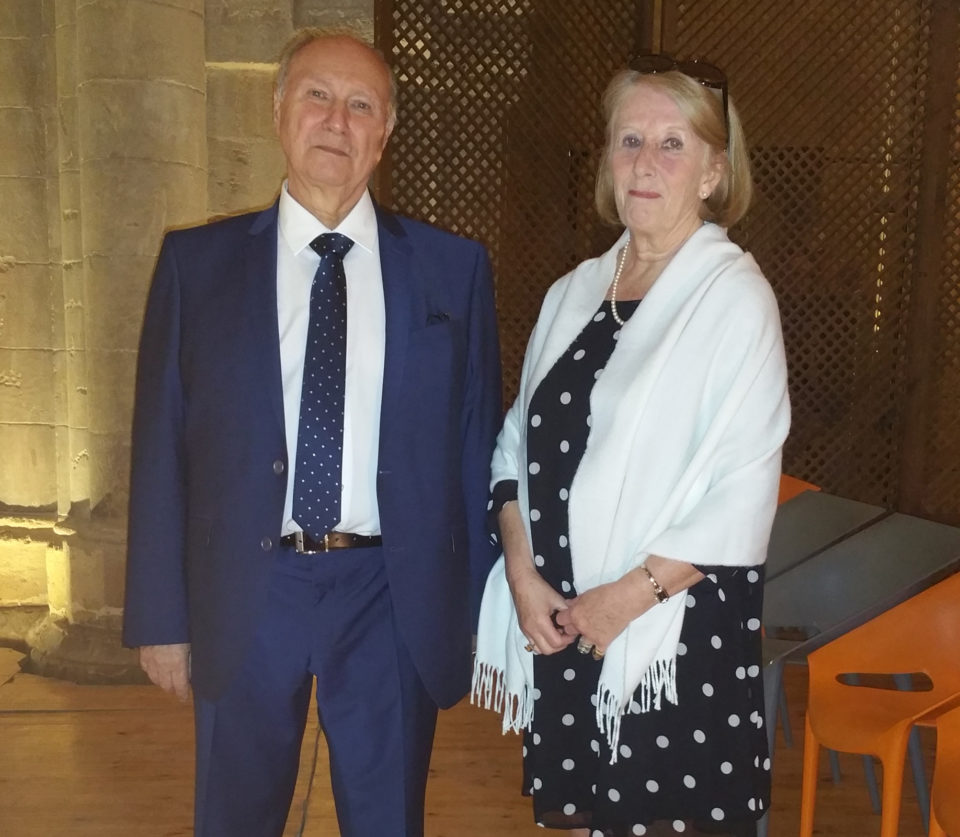 It’s a common enough dream. A DNA test or long-hidden, ancient documents prove that little old you are descended from a famous historical family.

Philippe Roux de Lusignan is no exception. He is convinced he’s descended from the Lusignans, a branch of a French noble family who ruled Cyprus – and sometimes Jerusalem and Armenia – between 1192 and 1489.

It’s well known they were a rum bunch – regicide among family members was scarily common, and they certainly weren’t nice to those they ruled – but they were royalty, and we’ve had none since.

Paris-based Roux de Lusignan and his wife were in northern Nicosia at a recent event hosted by Turkish Cypriot art enthusiast Tevfik Aytekin who is working on the Turkish translation of the book by French art-historian Camille Enlart, ‘L’ Art Gothique et la Renaissance en Chypre’, published in 1899.

Aytekin said he would be working on the project with Roux de Lusignan among others.

As one would expect from a member of a ‘noble family’, etiquette seems important to Roux de Lusignan. Each time he was introduced to a woman in the room, he bowed as if to symbolically bestow a courtly kiss on the hand. I was no exception.

The “prince” as several people at the event addressed him said he and his wife had visited the Cyprus several times, both the north and south of the island. The couple said they were amazed by the progress they witnessed over the years on the restoration of the famous Gothic buildings constructed by the Lusignan kings around the island.

“When we first came to the island in 1981 everything was broken, in a horrible state. When we came back, we were surprised to see there had been restorations,” Madame de Lusignan told the Sunday Mail. She said she liked the fact they were being preserved for the next generations.

“I came 10 years ago with the Louvre to make a documentary on the Lusignans in Nicosia, Famagusta and Kyrenia,” Roux de Lusignan said.

He and his wife both love to visit St Hilarion castle in Kyrenia. “Every time we come, we find a lot of new things to discover,” he added.

Along with St Hilarion castle, Kyrenia, Paphos, Kantara, Buffavento and Kolossi castles are all associated with the Lusignans as are the Gothic glories of Ayia Sophia in Nicosia and Ayios Nikolaos in Famagusta.

Naturally, the lineage issue came up during the gathering. One of the attendees asked if the Roux de Lusignans knew a Turkish Cypriot man who goes by the name of Mehmet Sevki Lusignan. He ran as an independent candidate in 1975 in the Turkish Cypriot general elections.

At this point, I was tempted to mention the green-eyed, fairish-haired Polis bar owner with an eye for the ladies I met years ago. He too claimed to be descended from the Lusignans. I kept quiet.

“We found there are many people claiming they are descendants of the Lusignans,” the guest responded.

Roux de Lusignan said that he often asked people bearing the same name to show documentation that they are descendants of the noble family but they could not produce any. “But we have the documents,” his wife said.

The couple now live in Paris, but his family used to live in Istanbul until World War I. His grandfather moved to France when the Ottoman Empire entered the war on the side of Germany and the family fled because they were French, according to Madame de Lusignan.

“When his grandfather left Turkey, he brought along two pieces of luggage one with the documents, the other with the family jewels,” she said.

The couple said their Lusignan family tree could be traced through the records of the Catholic Church as it holds all of the records on births, baptisms, marriages and deaths.

But the surprise was that Roux de Lusignan, who was the first in his family to be born in France, had a Greek grandmother, a “Stambouliote”, he said, and he speaks a bit of Greek. “H yiayia mou itan Ellinida (My grandmother was Greek)” he said in a broken accent.

His grandparents used to live in Haydarpasha in Istanbul before moving to France.

“Our children called their grandparents as ‘yiayia’ and ‘pappou’,” his wife said.

The couple did not elaborate further on their lineage.

A search online yielded a post on an event commemorating the Armenian genocide in 2013 in France was attended by Philippe Roux de Lusignan. There he paid tribute to his ancestor, Leo V the last King of the Armenian kingdom of Cilicia, according to the post.

Leon V, was a member of the Cypriot branch of the Lusignan family – those Lusignans got around – who was crowned in September 1374 but lost his kingdom barely one year later when the Mamluks took over Sis, the capital of Cilicia.

His title was then passed to his distant cousin, James I, the Lusignan who ruled Cyprus at the time and became King of Jerusalem, Cyprus and Armenia.

So is Philippe Roux de Lusignan a descendant of that bickering family who spent centuries squabbling over their various thrones? I wish I had the resources to check the Catholic church’s records and let you know.

But I did speak to a well-known mediaeval Cyprus history expert. Unfortunately, she did not want to be named. She said that the last descendant of the Lusignans is a man now living in the US.

Not another one. Perhaps it’s time to take those DNA tests.