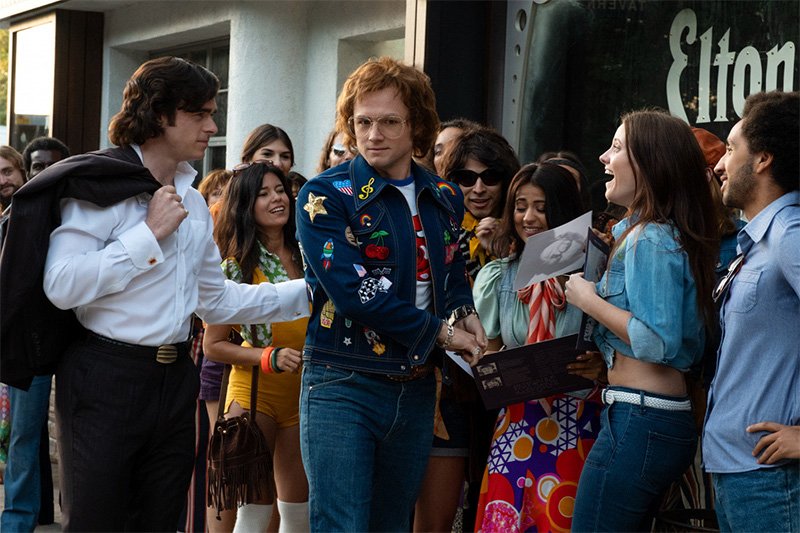 When Elton John (brilliantly portrayed by Taron Egerton, but more on that later) finds the courage to go on stage at Los Angeles’ infamous Troubadour club and sings Crocodile Rock something magical occurs. Elton starts to levitate, and the adoring, charged-up crowd levitates with him. His infectious showmanship and flamboyant pizzazz, seen for the first time outside of England, literally beats gravity. With that scene Rocketman also levitates beyond standard musical biopics and, presumably, wins over the hearts and imaginations of its audience.

It’s the most spectacular dash of magic realism in a picture that has a lot of it (perhaps a tad too much, but then again it is about Elton John) and basically makes two guarantees. First, diehard Elton John fans are going to positively adore Rocketman. Second, director Dexter Fletcher definitely did not direct Bohemian Rhapsody, which is the worst musical biopic ever filmed in comparison. (Fletcher was assigned to take over directorial duties of Rhapsody after Bryan Singer was fired, prompting a fuelled debate on who was the real director of the film. Now we know for sure.)

Rocketman pops, sizzles, dazzles and rocks all socks off in exhausting fashion thanks to the creativity of its director – clearly inspired by the sizzling pop, dazzling rock and, well, exhausting fashion style of his subject Elton Hercules John. It doesn’t always work, the concept of turning Rocketman into a literal musical makes some scenes and transitions noticeably awkward. Then again, sometimes it really does work like magic. Something that’s perfectly exemplified by the first two songs in the film: the first sees Elton breaking into song in the middle of group therapy, into a duet with his younger self (trust me, weird is good in this case) and the second sees Elton’s family members singing how they feel about love (and in this case, weird is just plain awkward). But we continue to watch, at times a bit squeamish and weirded out in our seats but mesmerised nonetheless as Fletcher, screenwriter Lee Hall and Egerton take us through Elton John’s rise to fame and fall from grace straight into rehab in 1990 (of course we all know his story has a happy ending, and the film ends on a positive high to remind us how this spectacle of a stage persona is still very much still standing and feeling like a kid).

Elton’s journey from boyhood to superstardom is one of real self-discovery and, the way the film is structured, one can see the whole film basically being one big therapy session as the story is told in flashback through the tears, sniffles and grimaces of an orange-costumed Elton in rehab. Born Reggie Dwight, and gradually inventing Elton John, we see how he becomes fast best friends with Bernie Taupin (an excellent and endearing Jamie Bell), the man behind the lyrics of most of Elton’s songs. We see his struggles and acceptance of his sexuality, how much his parents’ disdain and indifference during his childhood affected him as an adult, his first big break with manager Dick (hilarious, scene-chewing thief Stephen Graham) and his difficult relationship with John Reid (smarmy and villainous Richard Madden). Oh and, of course, lots and lots of cocaine, booze and ridiculous glasses.

Those who are not diehard Elton John fans (and, being honest, I count myself in that group) will not be completely blown away by anything earth-shatteringly new here. Once the sparkles fade away, the ground stops shaking and the glitter disappears what’s left is a pretty cut-and-dry story of a man who was born a naturally gifted musician, spiraled out of control thanks to the perks that come with rock-and-roll lifestyles and brought himself back up from the brink thanks to rehab.

Not the most compelling of journeys, which is why Fletcher razzmatazz-es the hell out of Rocketman with surreal scenarios, insane costumes and unpredictable musical cues. Of course there is one other element that should keep any kind of viewer – regardless of how much they like Elton’s music – glued to the screen and that is Taron “my career will skyrocket thanks to Rocketman” Egerton.

The young star goes full out here: completely embodying Elton John, singing every song himself, showcasing an incredible range of emotion, and showing us how hilarious he can be. Backed by an excellent ensemble, his performance stands out and is worth the ticket admission alone, and – just like that Troubadour scene – will sweep you off your feet.