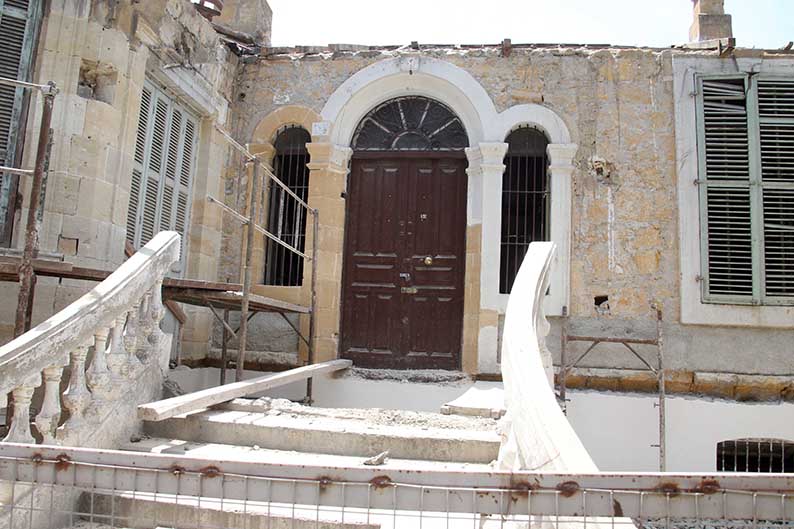 The early colonial bungalow style should be finished by October

A historical British colonial era house in Nicosia with a long history of different uses is being renovated after standing empty for years, in preparation for yet another use, that of a government building.

The building, an old Turkish Cypriot property belongs to Islamic religious and charitable organisation Evkaf on 38 Omirou street, has been leased by the House of Representatives.

During the British rule, it was the residence of attorney-general Kritonas Tornaritis, who lived there when in office from 1952 until 1960.

“After the invasion, the building housed four families of displaced people, who then moved to other homes that were assigned to them. The building was then given to the Nicosia municipality, who for a long time lent it to the Press and Information Office,” a spokesman for the ministry said.

Now the site is to be restored, the aim being to convert it into a ‘Citizens’ House’ where the public can be informed about the work of parliament and the legislative process.

It is getting a complete overhaul, with a new roof and new floors. All that is left of the old building are the walls.

“There will be new covered verandas, carried by columns as there were originally,” contractor Costas Roushas explained.

The renovation which started about a month ago will be finished by the end of October at a cost of €1.7 million.

The grounds will be landscaped and a place for outside dinners will be created.

“It is a good example of British colonial architecture and worth saving and re-using,” he said. “The nearest building in the same style is the former colonial secretary’s lodge, which has been restored in the past few years.”

“There were verandas all around the building, and all the rooms had fireplaces. We will reconstruct these and also the wooden floors and the ceiling.”

Wawrinka outslugs Tsitsipas in marathon ‘battle of the backhands’

Congress of Cyprus organisations in US to address arms embargo