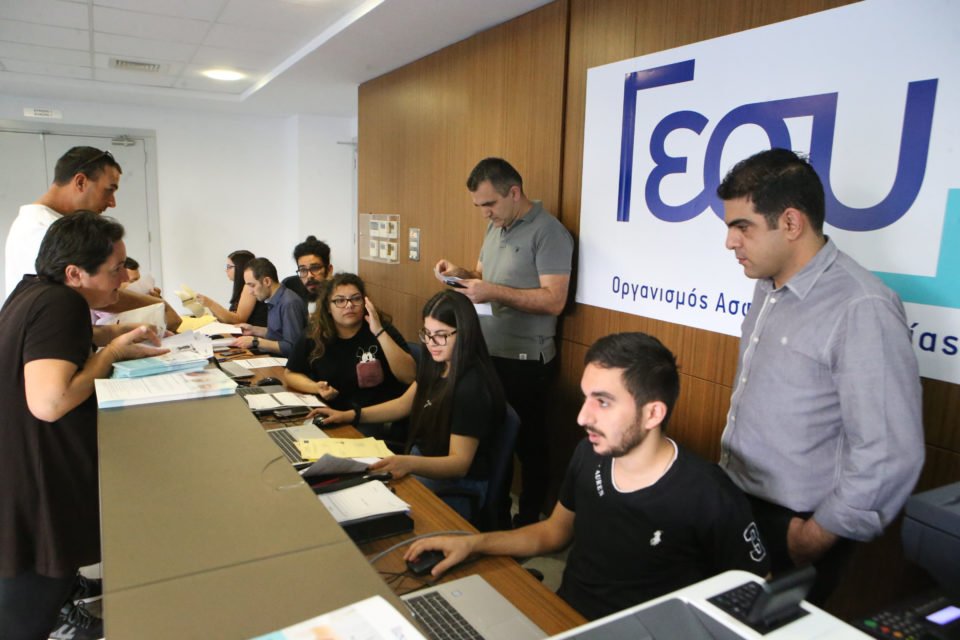 The new univiersal health system (Gesy) was put to its first real test on Monday after its official launch on Saturday with thousands flocking to Gesy doctors and pharmacies.

By Monday, the health insurance organisation (HIO) said that 527,000 persons had registered as beneficiaries of Gesy.

It added that by 1pm, Gesy doctors had received 2,000 patients and issued 800 prescriptions and 200 laboratory tests.

According to the HIO deputy director Efi Kamitsi, Gesy hospitals were operating smoothly and without significant problems.

“It’s a matter of both beneficiaries and healthcare providers gradually getting acquainted with the system so that things can move faster,” Kamitsi said.

Maria Kythreotou, the HIO’s senior officer, said that public hospitals on Monday only faced small problems which will be tackled using the feedback of beneficiaries and providers.

The majority of issues faced in all hospitals revolved around providers not being fully acquainted with the Gesy software and beneficiaries being inadequately informed on the services provided by Gesy and their prices.

According to CyBC, confusion among patients regarding the new environment of Gesy was the main headache at all public hospitals across Cyprus.

Anticipating the difficulties that would arise, the HIO had on Monday set up an information centre at the entrance of the Nicosia general hospital which was visited by hundreds of people throughout the day.

A room near the entrance of the Nicosia general was also set up to host HIO staff who accommodated people with their Gesy registration.

The Paphos general hospital was almost empty, CyBC reported, with the majority of patients being migrants who had not been informed of the changes in the healthcare system, while others consisted of patients who had prescheduled appointments with doctors.

Confusion among doctors regarding the new Gesy software prevailed in Limassol, CyBC said, where by noon on Monday around 1,000 patients had been treated.

The Larnaca and Famagusta general hospitals announced that they were operating smoothly.

Not as satisfied as the HIO, the president of the state health services (Okypy) Alekos Stamatis said on Monday that changes in public hospitals which must be made autonomous under Gesy are not moving at the required speed.

Stamatis urged the public to avoid unnecessary visits to public hospitals and Gesy healthcare centres, in order to allow time for problems to be resolved.

Similarly, Soteris Koumas, head of the state doctors’ union Pasyki, said that public hospitals are not ready for Gesy, assigning blame to the long-standing problems they faced prior to Gesy, and which were to be resolved through their autonomisation which has yet to occur, but also to the lack of training received by Gesy doctors and employees before the launching of the new system.

President of the pharmaceutical association Eleni Piera said that since the official launch of the healthcare reform on Saturday, all 440 Gesy-registered pharmacies were by Monday fully adjusted to the new system.

According to Piera, of the 530 pharmacies islandwide, 440 have registered with Gesy, while there are additional applications still awaiting evaluation.

“Every day is a day for which we cannot make predictions,” Piera said, “but today the system will be put to the test.”

All Gesy pharmacies had received and installed the new software to be used by Friday evening. The reduced workload over the weekend, when just 350 prescriptions were handled, did not allow major issues to arise.

The preliminary list of over 1,000 pharmaceutical products that will stock Gesy pharmacies was released last Tuesday and is to be constantly updated.

Problems that did arise in pharmacies mostly involved the digital prescriptions introduced by Gesy, whereby some drugs were written incorrectly or in wrong quantities, Piera said, but all issues were quickly resolved through the crisis management centre of the health insurance organisation (HIO).

On Saturday, the centre responded to over 300 calls from Gesy doctors and pharmacists.

“Such practical problems are expected to occur until the system is tried and perfected,” Piera said.

By Sunday evening, the list of registered doctors within Gesy included 364 GPs and 110 paediatricians, while an additional 50 GPs and 10 paediatricians were awaiting the completion of their registration. Specialist doctors amounted to 216.

Call for higher penalties after three fatal crashes over weekend