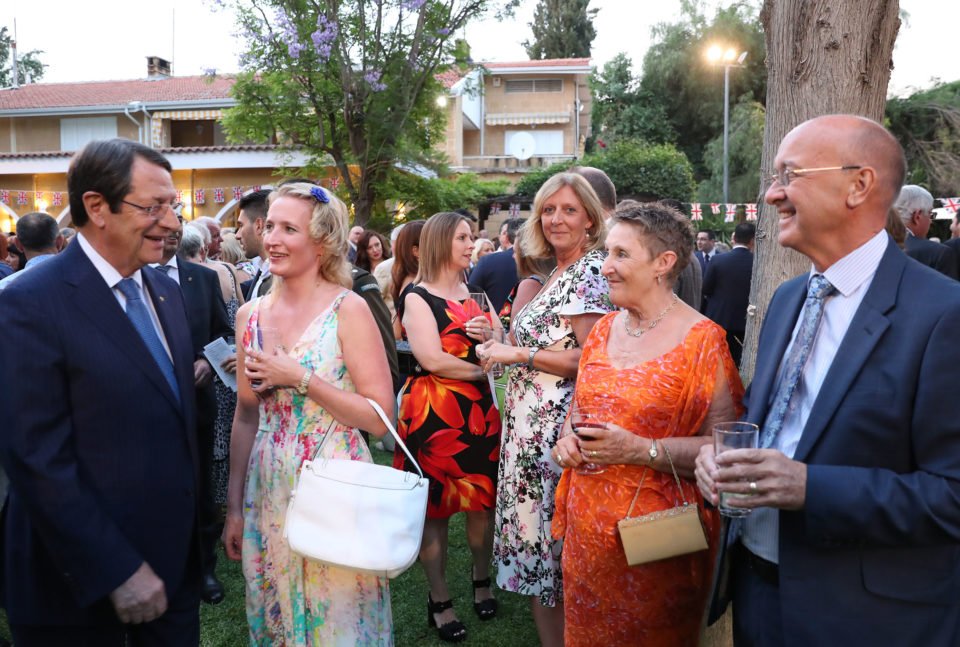 President Nicos Anastasiades at the Queen's Birthday Party in Nicosia

President Nicos Anastasiades said on Tuesday that British Prime Minister Theresa May sent him a letter on May 26 in which she expressed her opposition to Turkey’s planned drilling activities in Cyprus’ exclusive economic zone.

“I had the opportunity to discuss this critical matter several times with Prime Minister May and I wish to express my deep appreciation for UK’s full support and tangible solidarity with Cyprus, as clearly expressed in her letter dated May 26, 2019, through which she opposed Turkey’s planned drilling activities and fully recognised the sovereign rights of the Republic of Cyprus to explore and exploit its natural resources,” Anastasiades said speaking the Queen’s Birthday Party at the British High Commission.

Last month, Cyprus was outraged by statements made by British Minister of State for Europe Sir Alan Duncan, in which he said Cyprus’ EEZ was under dispute.

Anastasiades said on Tuesday: “I therefore ignore and not give attention to any statements contrary to the above by any UK government official which might negatively affect the joint aim of further advancing our partnership.”

On the Cyprus issue, the president said that the tension in the EEZ deters efforts to resume negotiations.

“Our side, as I have repeatedly stated, remains strongly and truly committed to the resumption of the negotiations on the six-point framework that Mr. Guterres has set as the basis for the way forward,” he said.

The president also spoke about the recent standoff in the buffer zone which saw farmers in Deneia being harassed by the Turkish army.

“I cannot overstate the importance of maintaining a calm situation throughout the whole island. To this end, I count on your support both through your government and the British contingents of Unficyp, in order to avoid a deterioration of the situation which would also negatively affect the prospect of resuming negotiations,” he said.

“What I would like to yet again underline in the strongest manner is our sincere commitment to reach a viable, lasting and functional settlement of the Cyprus Problem, in line with the UN Council Resolutions and the values and principles of the EU.”

On Monday, Turkey’s energy minister said that they will be dispatching a second drillship to the eastern Mediterranean in the middle of the month.

Fatih Donmez said the drillship Yavuz would be ready to start a new drill by July.

“Thus in the eastern Mediterranean our flag will be waving aboard our two giants, the Fatih and the Yavuz,” he added, alluding to the two drillships owned by Turkey.