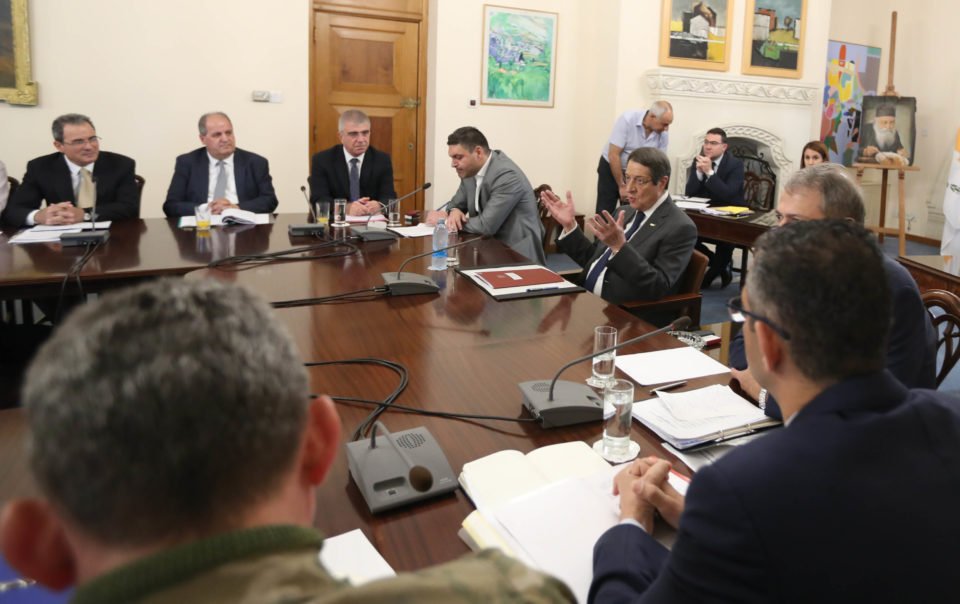 The fire meeting on Tuesday chaired by President Nicos Anastasiades

The government is ready to deal with fires this summer and proper preparations have been made, Interior Minister Constantinos Petrides said on Tuesday.

Dealing with fires was discussed at a meeting between President Nicos Anastasiades, the ministers of the interior, justice and defence, the chief of police, leading members of the fire brigade, the civil defence, heads of municipalities and their unions and the director of the Game Fund.

In statements after the meeting, Petrides said that this year is different because of the amount of rain which is positive in many ways but also poses an increased fire risk as the greenery that followed the rain has now turned into dry shrubs which cover large parts of Cyprus and are fodder for fires.

This is why operational and technical meetings have started much earlier this year to ensure everyone is prepared for a difficult summer season.

“We have declared our degree of readiness today. There has indeed been a great deal of preparation, with extraordinary measures regarding cleaning for example, funds have been raised, and a few weeks ago, the Cabinet approved the opening of rural roads, which is very important,” the interior minister said.

An intense information campaign has started and will run until October, while the 1,900 fire fighters are ready. Volunteers have offered their services, and vehicles are ready, while some minor problems are being ironed out, he explained.

For the first time, protocols have been established which relate to specific responsibilities of individuals, from the leader and coordinator of an operation to the civil defence official or community leader to ensure the best possible co-ordination.

“It is clear that the general coordinator is either the department of forests or the fire services, depending on the geographical location where a fire starts. And this general co-ordinator has a clear responsibility and competence to give orders to all those involved in firefighting or any attempt to extinguish a fire,” Petrides said.

Many meetings have been held to this effect, and funds have been raised for the cleaning of areas in and around communities.

Petrides admitted, however, that some problems exist, as it is difficult to find contractors.

“We are proceeding in the best possible way,” he commented.

Asked about the available aircraft, he said instructions have been given to investigate the extension of the lease of two of them by the forestry department, so that for safety purposes, two more would be available.

“This is something that will be investigated by the competent ministry and the department of forests,” he concluded.

AG made progress in his tenure

Protests against Trump in London but fewer than last year