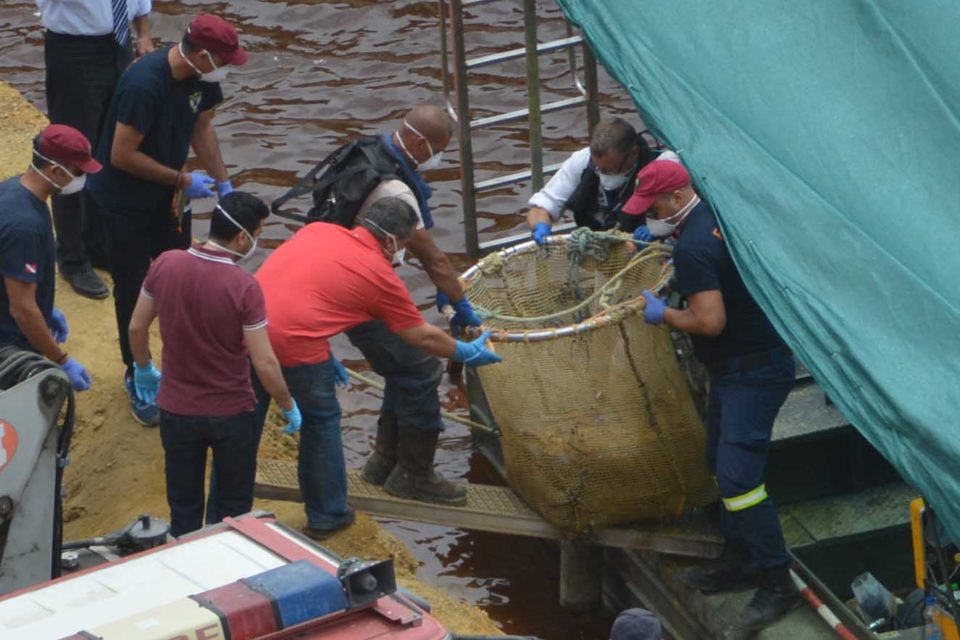 Rescuers retrieving the suitcase from the red lake on Tuesday

The chances of finding the body of six-year-old Sierra Granze are very slim because the lake it has been dumped in is around 60 metres deep with many underwater cliffs, the head of the divers tasked with the job said on Wednesday.

According to Edward Branco, owner of private company Brasal Marine Services, hired by authorities to offers its diving services in the search for the last two bodies of the seven victims of self-confessed serial killer Nicos Metaxas, the task of finding Sierra is expected to be very challenging.

Authorities have been searching for Sierra’s and 30-year-old Filipina national Maricar Valdez’s bodies for the last 50 days, the first in lake Memi near Xyliatos, the latter in another lake in Mitsero, dubbed ‘Red Lake’ due to the colour of its water which is highly toxic.

On Tuesday, diving crews found a suitcase with a badly decomposed woman’s body believed to belong to Valdez in the Red Lake so now all efforts will be focused on lake Memi.

Branco told media on Wednesday that even though the waters of lake Memi are clearer than that of the red lake, it is three times deeper.

“It is 60 metres deep, here (Red Lake) it is 20m. There are also cliffs, similar dangerous conditions such as shifting rocks,” he said.

He added that although the water in lake Memi is much clearer they will be looking for a much smaller object.

“We are not looking for a suitcase but for a child wrapped up in a sheet and a cement bloc. The possibilities are very slim,” he said, adding they would do everything in their power to locate anything that could help retrieve the girl’s body.

Branco said that conditions in the Red Lake had been very difficult due to the toxicity of the water but also because it was murky, very muddy with constantly shifting rocks. He said that his divers found it very hard going while the acidity of the water had damaged some of their equipment.

“There were difficulties but we did not give up,” he said, admitting that this was one of the most difficult jobs they had undertaken and the first of its kind.

Sierra Granze is the only one of Metaxas’ seven victims that hasn’t been found yet. The serial killer admitted to killing the girl, along with her mother, 39-year-old Mary Rose Tiburcio, and dumbing her body in lake Memi in Xyliatos after wrapping her body in a sheet and tying it to a cement block. Tiburcio was the first of Metaxas’ victims that was accidentally found inside a mine shaft on April 14, uncovering what is the first recorded case of a serial killer on the island. Mother and daughter had been reported missing by their roommate on May 5, 2018.

Crews have already recovered two other bodies from the Red Lake, thought to belong to Romanian national Livia Florentina Bunea, 36, and her eight-year-old daughter Elena Natalia who disappeared on September 30, 2016 in Nicosia.

Two more bodies were found; that thought to be of Arian Palanas Lozano, 28, from the Philippines, retrieved from the same shaft as Tiburcio, and another one believed to be Asmita Khadka Bista from Nepal that was found near a firing range in Orounta. Lozano disappeared in July 2018 while Bista was last seen in early 2018.

Buffon to leave PSG after one season