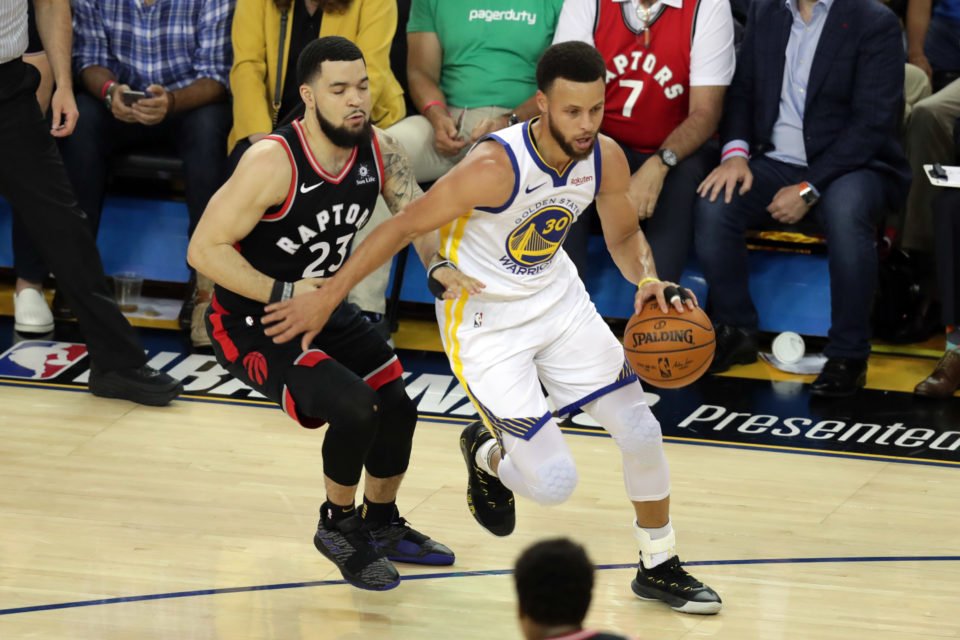 Missing two key pillars of their starting lineup, the Golden State Warriors had to turn to two-time MVP Stephen Curry against the Toronto Raptors in Game Three of the NBA Finals in Oakland on Wednesday.

Curry obliged and gave them 47 points and six three pointers while playing nearly the entire game but it was not enough.

The two-time defending champions fell 123-109 to the visitors and now trail 2-1 in the best-of-seven series as the team’s other starters could only muster 36 points combined.

“Very proud,” he told reporters when asked about the team’s effort, which included players diving for loose balls and sacrificing their bodies to take charges on defense.

“They played really, really hard and gave it everything they had and just ran into a better team tonight.”

Curry echoed Kerr’s comments and said the team, who play under the motto ‘Strength in Numbers’, would not use the injuries as an excuse.

“The moment is now. You got to try to have ‘next man up’ mentality, like we always say, and just go out and fight,” he said.

“We did that tonight. We can play better, obviously better on the defensive end, but I liked the competitiveness that we had, understanding that we’re missing 50 points pretty much between KD and Klay.

“So we’ll adjust. And it’s a long series you know. It’s going to be fun for us.”

“Win the next game, go back to Toronto, win Game Five, come back to Oracle, win Game Six and then celebrate.

Kerr said he thought Thompson would be back for Game Four on Friday in Oakland but did not have an update on Durant’s status.

Kerr tipped his hat to Curry, who had a career playoff high in points despite being aggressively double teamed throughout the contest.

“Steph was incredible. He does things that honestly I don’t think anybody has ever done before,” he said.

“The way he plays the game, the way he shoots it and the combination of his ball handling and shooting skills, it’s incredible to watch.

Is the party bigger than the president (web)?