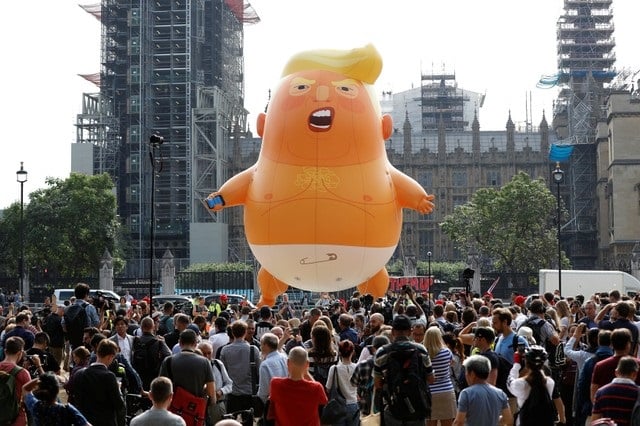 Protesters in Dublin on Thursday hoisted the “Trump Baby” inflatable blimp that has become a staple of rallies against the U.S. president, who was spending his second night in a row at a golf hotel he owns in Ireland.

The six-metre high blimp, which depicts Donald Trump as a snarling, diaper-wearing orange baby, was a rallying point for thousands of anti-Trump protesters who packed central London on Tuesday and tens of thousands who protested in the city against a trip last year.

A few thousand rain-soaked people marched down Dublin’s main thoroughfare of O’Connell Street, a day after Trump’s sons received a warm reception from locals in the village that adjoins Trump’s golf course 300 km (185 miles) to the west.

“I cannot put my finger on what is the worst thing about this man,” said Mairin de Burca, one of the oldest protesters, at 81 years of age.

“Dragging children away from their parents at the border, maybe that’s the worst thing,” she said, referring to a Trump administration policy of separating children from parents who had illegally crossed the U.S.-Mexico border.

The blimp, which was transported by activists from London, flew above Dublin’s Garden of Remembrance, which is dedicated to “all those who gave their lives in the cause of Irish Freedom.” Passers-by stopped and took selfies with the blimp.

A member of Prime Minister Leo Varadkar’s cabinet was among the protesters. Finian McGrath, an independent lawmaker who is not part of Varadkar’s Fine Gael party, said he was marching to show his “total opposition” to Republican Trump’s foreign policy and views on issues such as equality.

The demonstration contrasted with the welcome Democratic President Barack Obama received in Dublin eight years ago when he spoke to a cheering crowd of thousands on an official visit.

Trump’s Irish visit, which followed a pomp-filled state visit to the United Kingdom, has been relatively low key. He and his wife Melania spent Wednesday night at his Trump International Golf Club in Doonbeg on the west coast of Ireland.

They flew on Thursday to Normandy in France for the 75th anniversary of the D-Day operation that helped bring World War Two to an end, and then flew back to Ireland ahead of their departure home after a round of golf for Trump on Friday.

While Trump made no appearances open to the Irish public, his sons Eric and Donald Jr. toured the pubs in Doonbeg on Wednesday, buying drinks for almost everyone in the village, who credit the Trumps with securing their livelihoods when they bought the resort out of receivership in 2014.

Vita McInery, whose Wild Atlantic Break Cafe in Doonbeg has been bustling throughout the visit, said she found Trump’s “well-documented” issues with women “difficult”.

“But in business you have to do business with people you might not necessarily get on with. You have to separate that out and that’s life.”