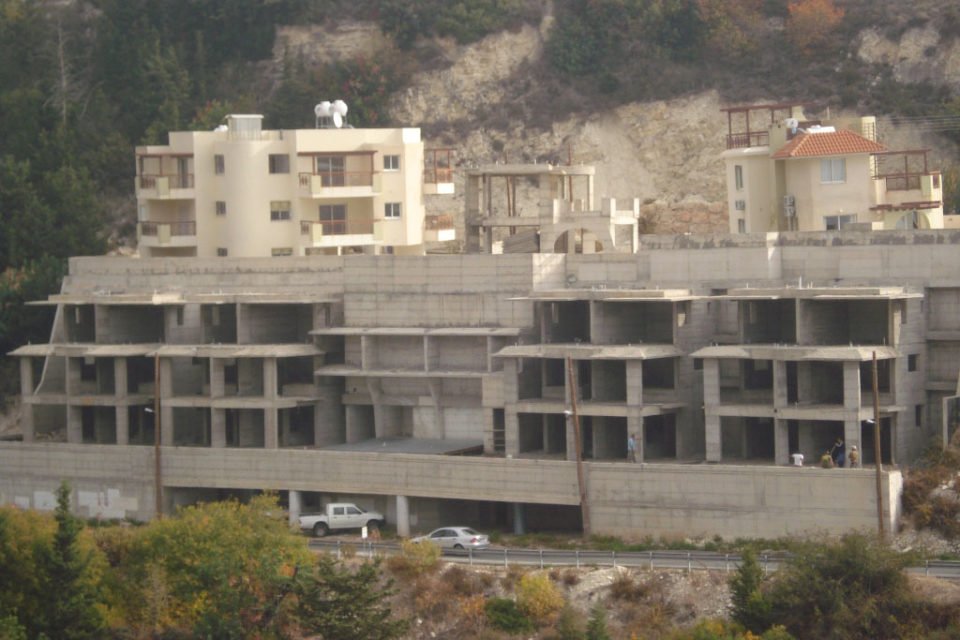 The Tala housing project that was never finished

FOLLOWING a Supreme Court decision ordering the developer of an abandoned and structurally dangerous residential complex that is sliding down a hillside in Tala, to demolish within 60, the Paphos District Office is seeking clarification and the green light from the state legal service for a way to bring it down sooner.

“The court decision is against the developer and they have two months to demolish it, after which time we can then proceed, but due to the urgent nature of the problem we are taking advice from the attorney-general in order to proceed sooner than that as a matter of urgency,” Mary Lambrou, Paphos District Officer, told the Cyprus Mail on Thursday.

On May 31, after an appeal to the Supreme Court by the Paphos District Office, PDO, the developer was found guilty and a demolition order was issued. The deadline is two months at the latest. “We don’t expect them to comply as they haven’t so far, so this is why we are going to proceed,” said Lambrou.

The complex was deemed dangerous after huge cracks appeared in the buildings which are now also tilting and splitting. Cracks are also apparent on the busy Kamares road beneath. Tala authorities and residents have long called for the demolition of the project.

Tremetoushiotis Developers Ltd were responsible for the construction of the development, but have said that they would never have gone ahead with construction, which includes 12 apartments and two detached houses, if they had been aware that the land was ‘problematic’ to build on.

They previously told the Cyprus Mail that they have suffered financial damage of more than €3.5m for the construction, and have reimbursed the owners of the properties with an additional cost of €750,000.

The PDO has requested the go ahead from the AG to use regulation 15B of the Streets and Buildings law that will allow them to go directly and demolish the structures, even before the two-month period given to the developer is up.

“We have already prepared a tender, it’s a very specialised case and there mustn’t be any more problems caused to the houses that are already built on the hillside above this development,” she said.

The PDO is also in communication with the minister of the interior and will need some additional funds, she noted. The cost of the demolition and to make the area safe will be around €300,000 €400,000.
Lambrou explained that the PDO was made aware that there were problems with the skeleton of the building in 2011 following heavy rain. The developer was requested to reinforce the skeleton to prevent further damage. They did not comply, she said.

In 2013, legal measures were taken against them, as some of the work was not done according to the building permit, she added.

“The two buildings on the upper level were causing serious damage to the lower level, and in 2015, when I came into office in Paphos as the District Officer, we discussed a compromise solution with the developer, as the problem was not too serious then as now.”

This was to demolish the upper level to relieve the pressure being placed on the lower level, however, this never happened, she said.

The PDO proceeded with legal action against the developer and on December 31, 2018 the court found the developer not guilty on ‘technicalities’.

“One reason was that the notice we gave to the developer was not handed to the company owner, but to the secretary of the firm. I was very angry and we changed to another lawyer and submitted an appeal to the Supreme Court.”

Lambrou said that the structure was dangerous for the public, which is why the PDO decided they had to close the road for all access.

“We have had some complaints, but this is necessary for the public’s safety, and this must come first. We can’t put the public at risk.”

Lambrou noted that the company chosen to undertake the difficult and risky demolition job will work on both the road and the slope at the same time and will need to be experienced in such projects.

“The area will also be piled to improve the stability of both the slope and the road.”

Our View: Okypy’s chief exec was fired unusually fast for a public entity