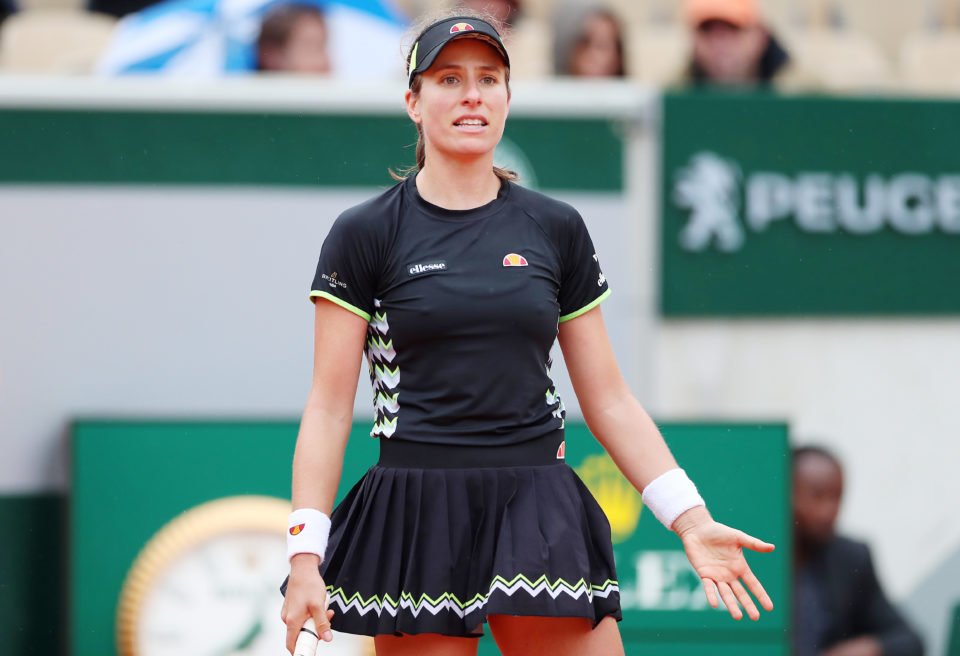 Johanna Konta’s hopes of reaching a first grand slam final were ended by a straight-sets loss to Czech teenager Marketa Vondrousova at the French Open.

This appeared a golden chance for Konta to become the first British woman to win a slam singles title since Virginia Wade at Wimbledon in 1977, but she let winning positions in both sets slip away and went down 7-5 7-6 (2).

In the end it was 19-year-old Vondrousova who showed the greater composure, coming back from 5-3 down in both sets.

The first set was a particularly bitter pill to swallow for Konta, who had three set points at 5-3 only to lose four games in a row.

As the players took golf carts out into the botanic gardens, where a disappointingly sparse crowd had gathered for the hastily-arranged contest on Court Simonne Mathieu, Konta looked relaxed.

But this was a different scenario from her two previous semi-finals given she found herself, remarkably, as the most experienced player left in the tournament.

Vondrousova had never been beyond the fourth round at a slam before and her nerves were obvious in the first game with back-to-back double faults, while Konta clinched the break with a backhand winner down the line.

By the time Vondrousova won her first point, Konta had already won 10, but the British player let her opponent off the hook by placing a forehand wide of the open court and that settled the Czech down.

The threatened rain mostly held off but wind was whipping the clay off the court, something that Sloane Stephens felt had helped the aggressive game of Konta in their one-sided quarter-final.

Vondrousova is an excellent mover, though, and Konta was finding it much harder to hit through her than she had Stephens.

After dropping serve and then immediately regaining her break, Konta looked to have the set in her control when she brought up two set points at 3-5.

The drive volley that she blazed long and wide on the first will surely appear in her nightmares, and that set the tone for what followed.

Konta missed the next chance, too, and then another, and began to make poor tactical decisions, getting sucked into playing Vondrousova’s game instead of trusting her own.

Konta was unable to serve out the set, and was then broken again to lose it, leaving a Vondrousova lob that landed on the baseline.

Under coach Dimitri Zavialoff, Konta has regained the mental composure that was so striking when she hit a high of fourth in the rankings two years ago.

Underneath, though, the 28-year-old is of a nervous disposition and it was not surprising that it was bubbling to the surface on this high-pressure occasion.

Konta desperately needed a good start to the second set and she made it, stopping the run of games against her at five and then breaking for a 2-1 lead.

She found herself in the same position as she had in the opener, this time serving at 5-4 to take the match to a decider, but again she was unable to overcome the tension.

A double fault handed the break to Vondrousova and moments later Konta was serving to stay in the match.

She at least managed to force a tie-break this time but the tactical surety that she had shown during the rest of the tournament was missing.

That was to take nothing away from her opponent, who played like the more experienced competitor and clinched a place in her first slam final with a typically precise backhand drop shot.

End of May, Britain’s PM steps down as Conservative leader