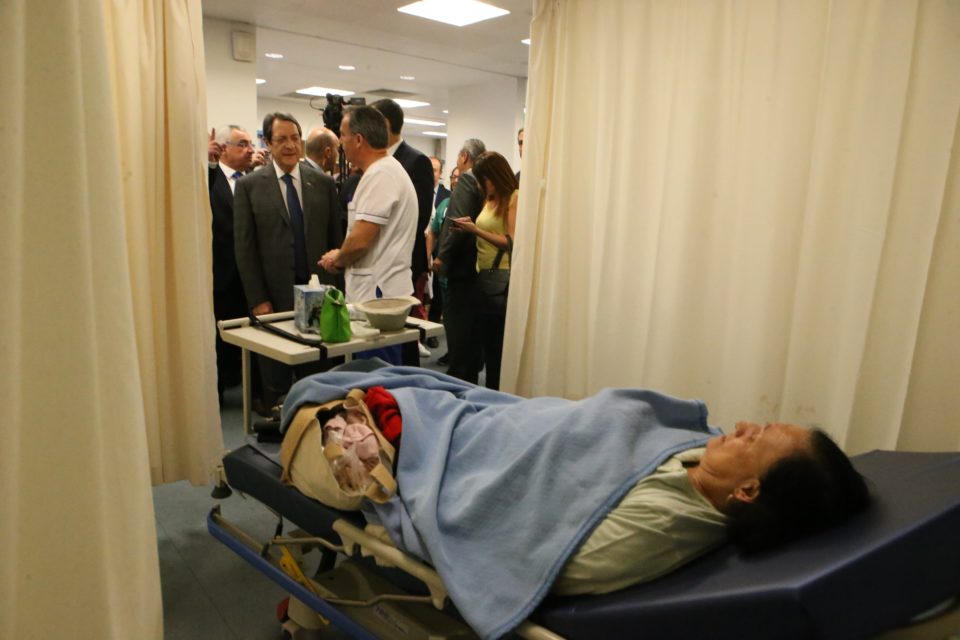 Problems met since the introduction of the National Health Scheme (Gesy) have reduced as the days go by, President Nicos Anastasiades said on Friday during a visit to Nicosia general hospital to see the system in action for himself.

While there, he presided over a meeting with all competent services, trade unions and representatives of patients and visited the hospital wards and chatted with patients. He was accompanied by Health Minister Constantinos Ioannou and the ministry’s permanent secretary Christina Yiannaki.

“I only heard two problems; one was due to the inadequate knowledge of the state official, the other due to lack of knowledge by the person concerned,” he said.

He added that as days go by “I believe that through information, insignificant problems that are recorded will be solved.”

His presence at the hospital, he said, was proof of the strong interest by the government and its determination to implement Gesy until the end.

“I feel satisfaction because after 54 whole years of studies, timeframes etc, the introduction of Gesy has been made possible since June 1, through political will and the support of political forces,” Anastasiades said.

He admitted there will be problems, adding that many thought the problems would lead to a collapse of the system or that the system would not work.

A week after Gesy was introduced, however, it emerged that those who handled the entire structure of the system have worked professionally, he said.

One of the patients he spoke to was Loucas, a boy in a wheelchair who was waiting for Anastasiades to make a complaint about parking spaces.

Loucas told Anastasiades that many illegally park on spaces reserved for the disabled and as a result, people who actually need to park there are unable to do so.

Anastasiades promised to solve the problem.

The president said later in a post on social media that Loucas’ complaint has made him “even more sensitive” on issues concerning the disabled and that he asked the justice minister for stricter controls.

“My instructions to all those responsible are that I will not tolerate the lack of control or punishment of those who violate the rights of people with disabilities,” he said.

He added that he also asked the head of the Press and Information Office to launch a media campaign to raise awareness on the rights of the disabled.

While he was in the hospital Anastasiades took the opportunity to visit former president Demetris Christofias, who has been in the intensive care unit since May 20.

“His situation remains stable and this is encouraging, but it is a difficult time for Demetris. I wish him to get well and all the best to his family,” Anastasiades said.