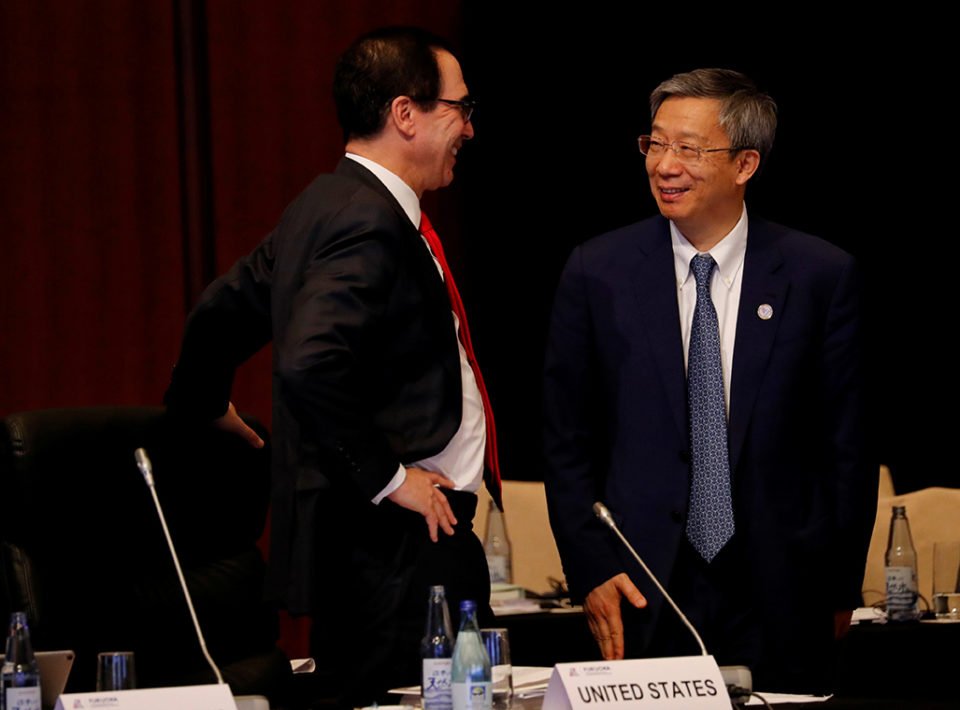 By Francesco Canepa and Jan Strupczewski

Finance leaders of the Group of 20 major economies will steer clear of promises to avoid protectionism in a communique on Sunday amid escalating US-China trade tensions, officials say, casting doubt on their ability to take a united front in averting a global recession.

US Treasury Secretary Steven Mnuchin said his scheduled meeting with People’s Bank of China Governor Yi Gang will not be a “negotiating meeting” on trade issues, reinforcing the view there will be little breakthrough in the row between the world’s two largest economies.

“If we go down this route, we risk clogging the G20,” the official said.

Japan, which is chairing this year’s G20 meetings, has said the finance leaders won’t put trade high on the agenda and won’t seek to mediate bilateral trade rows. But the growing economic fallout from the trade war has made it hard for them to side-step the topic.

Bank of Japan Governor Haruhiko Kuroda said while global growth was expected to rebound at the latter half of this year, trade tensions were making the outlook uncertain.

On the insistence of US President Donald Trump, G20 financial heads in 2017 replaced a phrase about avoiding all forms of protectionism with a sentence that they would work “to strengthen the contribution of trade to our economies.”

Asked if the new phrasing would be kept this time, a second G20 official said: “Yes, most probably”.

The communique will keep a pledge to avoid competitive currency devaluations, though the language on exchange rates had not been finalised, the officials said.

The communique will be released on Sunday after being signed off by the G20 finance leaders.

Relations between the United States and China have deteriorated since Trump in early May accused Beijing of reneging on commitments to change its ways of doing business with the rest of the world. Washington raised tariffs on Chinese goods and threatened new levies, while Beijing has retaliated.

Mnuchin, who will hold talks with China’s Yi Gang on the sidelines of the G20 gathering, said the United States wants free, fair and balanced trade with China, in part to close a gaping US trade deficit with China.

“If we can’t have that, the end result will be that my expectation is that many companies will move their production out of China to other locations,” due to tariffs, Mnuchin said.

He added that any major progress will rest with Trump’s expected meeting with Chinese President Xi Jinping at a G20 leaders’ summit late this month.

In a rare positive development, the US administration said it will put off imposing tariffs against Mexico after the two countries reached a deal to contain the migration of immigrants crossing the southern US border.

“It’s a very good outcome not just for the United States and Mexico, but for the global economy,” the BOJ’s Kuroda said.

Iran has no plans to leave OPEC -Iranian oil minister

Trump calls off tariffs after Mexico vows to tighten borders