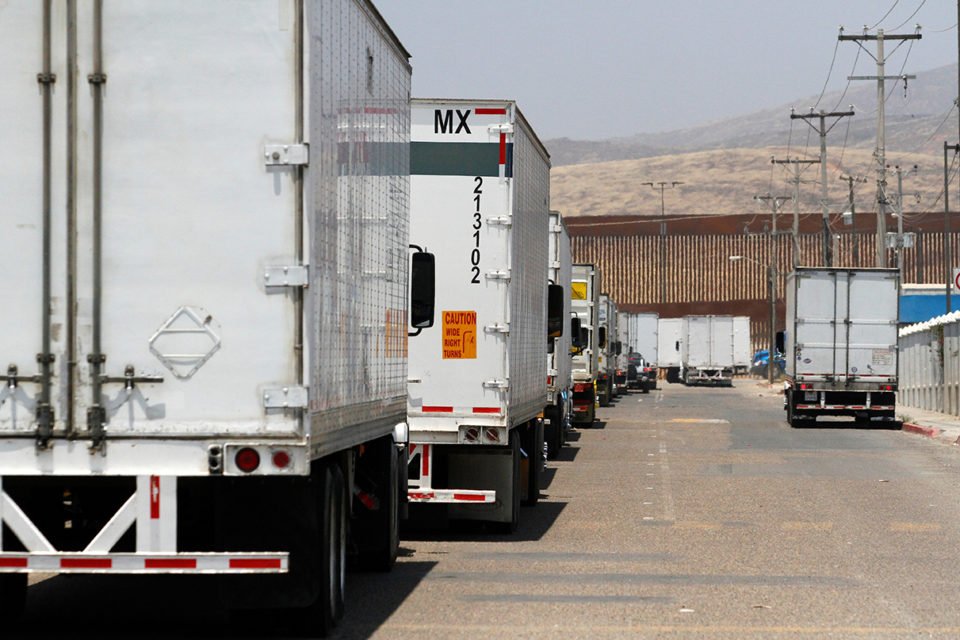 Trucks wait in queue for border customs control, to cross into the US, at the Otay border crossing in Tijuana, Mexico

By Roberta Rampton and Diego Oré

The United States and Mexico struck a deal on Friday to avert a tariff war, with Mexico agreeing to rapidly expand a controversial asylum programme and deploy security forces to stem the flow of illegal Central American migrants.

US President Donald Trump had threatened to impose 5% import tariffs on all Mexican goods starting on Monday if Mexico did not commit to do more to tighten its borders.

In a joint declaration after three days of talks in Washington, both countries said Mexicoagreed to immediately expand along the entire border a program that sends migrants seeking asylum in the United States to Mexico while they await adjudication of their cases.

However, the deal fell short of a key US demand that Mexico accept a “safe third country” designation that would have forced it to permanently take in most Central American asylum seekers.

“The Tariffs scheduled to be implemented by the US on Monday, against Mexico, are hereby indefinitely suspended,” Trump said in a tweet on Friday evening.

Frustrated by a recent surge of migrants that has overwhelmed US resources on its southern border, Trump had used the threat of tariffs to pressure Mexico into making concessions.

He has made hard line efforts to reduce illegal immigration a cornerstone of his presidency and it is certain to be a key issue in his re-election bid next year.

But business groups and even some close Republican allies were unhappy with the prospect of tariffs on the top US trade partner, saying they would damage the economy.

Duties on Mexico would also have left the United States fighting trade wars with two of its three largest trading partners, and would further unnerve financial markets already on edge about a global economic slowdown.

Mexican Foreign Minister Marcelo Ebrard said in Washington his team had also resisted US requests to send deported Guatemalans to Mexico. He said he was satisfied with the deal.

“I think it’s a fair balance because they had more drastic measures and proposals at the start and we reached some middle point,” he said, emphasising the importance to Mexico of having kept safe third country out of the deal.

He also highlighted US support in the agreement for a Mexican proposal to jointly adress underlying causes of migration from Central America.

The asylum programme to be expanded is commonly known as Remain in Mexico, and currently operates in the border cities of Tijuana, Mexicali and Ciudad Juarez.

Under the new deal, returned asylum seekers will spend long periods in Mexican cities such as Reynosa on the Texas border, where drug cartels frequently kidnap migrants.

The program was challenged in court earlier this year by the American Civil Liberties Union (ACLU) and other rights groups which say it puts asylum seekers in danger and violates US and international law.

While a federal judge ruled to halt the policy, a US appeals court overturned the decision, allowing the policy to continue as the legal challenge is ongoing. Through June 5, 10,393 mostly Central Americans have been sent back to Mexico since the programme started in January.

Omar Jadwat, director of the ACLU’s Immigrants’ Rights Project, said the group would continue to press its legal challenge to the policy.

Under the deal, Mexico will also increase its efforts to stop illegal migrants from Central America traveling through Mexico to the United States. Those measures will include deploying the militarised National Guard security force to its southern border.

Ebrard said the National Guard deployment would start on Monday.

The two countries will continue discussions, to be completed in 90 days, on further steps, according to the declaration.

US border officers apprehended more than 132,000 people crossing from Mexico in May, the highest monthly level since 2006. Trump, who has called the surge in migrants an “invasion,” had threatened to keep raising duties up to 25% unless Mexico addressed the problem.

Mexico had prepared a list of possible retaliatory tariffs targeting products from agricultural and industrial states regarded as Trump’s electoral base, a tactic China has also used with an eye toward the Republican president’s 2020 re-election bid.

Economists have said that two trade disputes could damage supply lines and pinch consumers at a time when the global economic expansion that followed the 2008 financial crisis has started to sour and the risk of recession has risen.

Even the United States, one of the more solid performers on the economic stage, would not be immune to the downdraft.

The US Labour Department reported on Friday that job growth slowed sharply in May and wages rose less than expected, raising fears that a loss of momentum in economic activity could be spreading to the labour market.