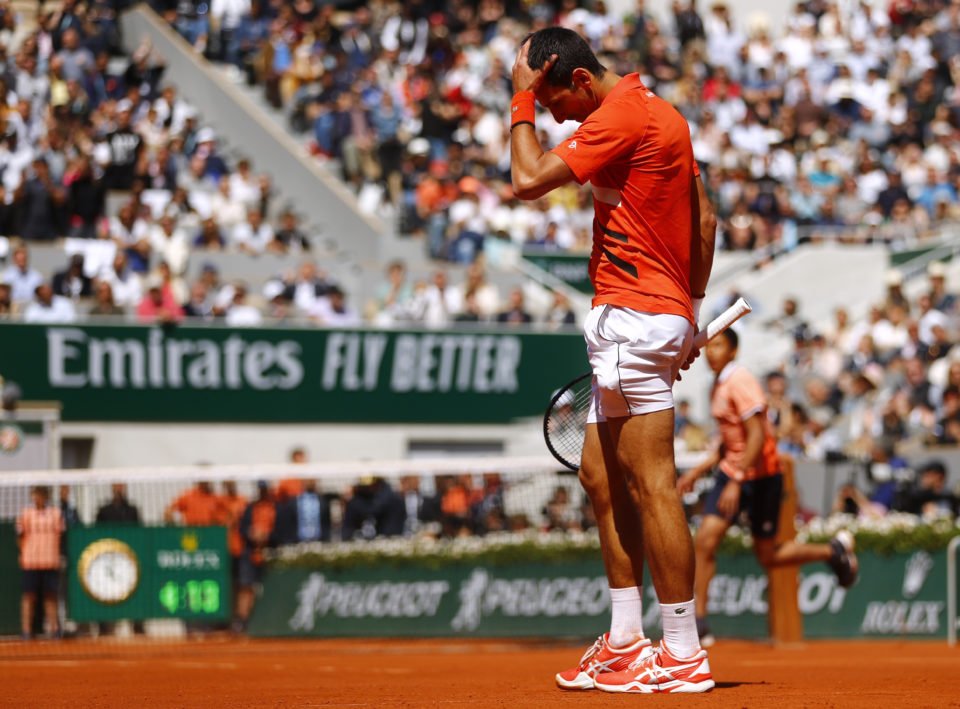 Novak Djokovic said conditions during his French Open defeat by Dominic Thiem over Friday and Saturday were some of the worst he had played in after his hopes of a second Roland Garros title were blown out in a stormy semi-final.

World number one Djokovic had trailed 2-6 6-3 1-3 on Friday when rain interrupted the match and then play was abandoned for the day despite it being a largely dry, though windy, evening.

Swirling winds were still buffeting Court Philippe Chatrier when play resumed just past midday local time on Saturday and play was again interrupted for an hour before Thiem completed a dramatic 6-2 3-6 7-5 5-7 7-5 victory.

The Austrian will go forward to Sunday’s final against Rafael Nadal while Djokovic will head to the grasscourt season with his hopes of holding all four Grand Slam titles simultaneously, for the second time in his career, over.

Djokovic’s usually clinical game was thrown out of kilter by the conditions and the match included some bizarre points with the ball making wicked deviations in flight as the remnants of Storm Miguel made mischief.

“One of the worst conditions I have ever been part of,” the disgruntled, 32-year-old Djokovic told reporters minutes after his 26-match winning run in Grand Slam play was ended.

“I don’t want to point out some reasons or find excuses for this loss. I mean, he took it, he won it, well done to him.”

It had been smooth sailing for Djokovic who had not dropped a set on route to his ninth French Open semi-final but Thiem, and the weather, closed in to deny him a 25th appearance in a Grand Slam final.

The Serbian was upset by the conditions on Friday when the wind whipped up the clay surface and even sent an umbrella flying across the court.

On Saturday he was tetchy at times and received a warning from the umpire for unsportsmanlike conduct after losing the third set in a dramatic 12th game.

Asked whether there should be a “wind limit” for professional tennis matches, Djokovic said: “There is no rules. What I was explained yesterday on the court in the first set, when I asked the supervisor, he said as long as there are no flying objects coming on court, we’re good.

“I didn’t know that an umbrella is not a flying object, which flew in the first game of the match. But that’s their decision. I guess they know tennis better.”

There was confusion still about why the match was not concluded on Friday as there was a three-hour spell of dry and breezy weather after the decision was made to call off play.

Rafael Nadal and Roger Federer had completed their semi-final in similarly tricky conditions.

Asked why that had not happened, Djokovic snapped: “I don’t know. You can ask (the tournament supervisors).”

Ponting warns Australia of bouncers at Oval against India