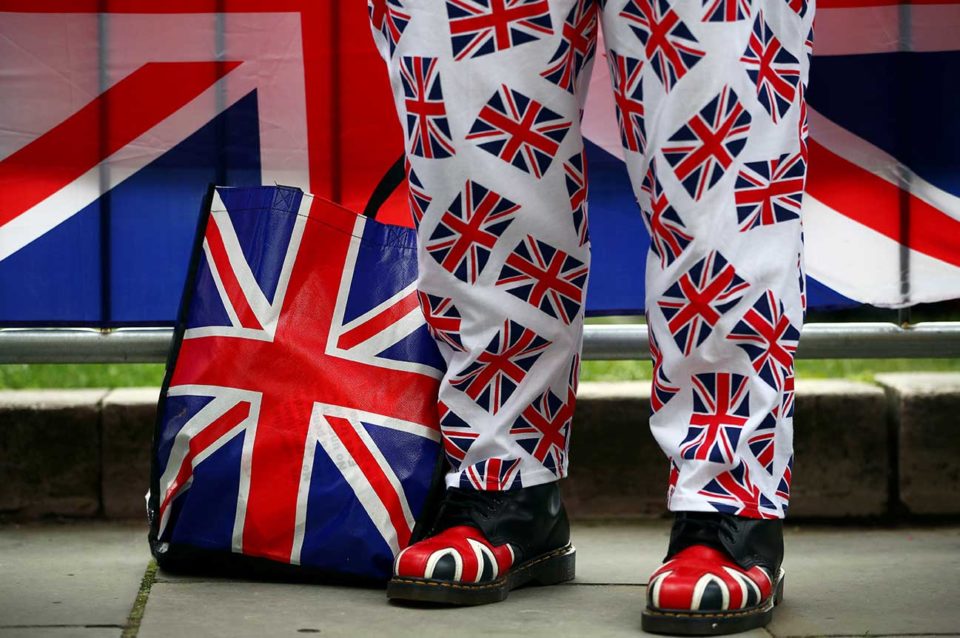 File photo: A pro-Brexit protester stands outside the Houses of Parliament in London

The International Business Structuring Association (IBSA) Brexit discussion meeting at Close Brothers Asset Management in London on May 30 was a fascinating insight into the legal, political and economic consequences of Brexit.

Despite my having chosen a date for this discussion some months ago, thinking that May 30 would be two months after the original departure date of March 29 and we would know all about these consequences, the Brexit conundrum still has not been solved. Nor is it likely to be, for some years to come! But the discussion did give some solace to the degree of uncertainty that exists, whilst highlighting the risks to business as a result of this uncertainty.

Malcolm Dowden of Womble Bond Dickinson started the meeting by explaining the UK legal issues involved and how a hard Brexit is not only possible but actually the default position as of October 31, 2019. This is particularly likely now that the British parliament and the government have virtually given up resolving the genuine concerns for business and is fast embarking on the summer recess. Indeed a no-deal Brexit becomes an unfortunate locomotive heading towards a precipice.

Malcom gave some examples of how the absence of any resolution to the impasse would affect business. For example, with a no-deal Brexit, GDPR personal data handling after the UK departure means that a data processor located in the EU would not be able to rely on EU “model clauses” to transmit relevant data to a controller in the UK. Regulatory standards in various different industries may vary and although the UK has currently adopted EU regulations, these may change as the UK seeks to maximise its attraction as a ‘Singapore’ type independent power house economy.

However, amongst the doom and gloom, there are some encouraging signs for business. It would seem that there is a strengthening in supply chain recognition where large companies are getting to know their SME suppliers and customers and helping them with customs procedures and reliefs for the first time. This vertical integration of systems to help those with limited resources may lead to improved relationships, cost savings and potentially a greater competitive edge.

Nikos Korogiannakis of Elias Neocleous & Co law firm in Limassol then presented the European view on the legal and political issues of Brexit. In summary, he said that public opinion had lost interest in Brexit (much as it has in the UK), and that the UK itself does not seem to have participated in any new EU regulations since 2017. For example the EU Regulation on Investment Funds in May 2019 did not have any contribution from the UK at all. So in a way, Brexit has already happened, and now we have to work out how the EU and UK will work together in the future!

Nikos commented on the legend that the UK will become the new ‘Singapore’ of Europe, but suggested that with EU legislation remaining as the status quo for probably a decade, such a hope may miss out on a generation. But on a more positive note, EU member states do not believe that a no-deal Brexit is a reality. Indeed, there is probably no such thing as a no-deal, since although a deal may not be reached by October 31 (after which WTO rules will apply for a limited period of time), the EU and the UK will work together in creating a new deal which accepts what will then be the status quo.

Taking the banking industry as an example, 78 per cent of M&A activities in the EU is undertaken by UK banks, whilst 90 per cent of EU hedging risks is undertaken by UK banks. Indeed, UK banks earn 25 per cent of their total revenue from the EU, and therefore the inter-relationship between the UK and EU cannot be denied with a no-deal. A deal will indeed be reached to benefit both sides, and this applies to all regulatory activities such as GDPR mentioned by Malcolm, to tariffs, movement of labour and financial contributions towards what is likely to become some form of customs union to prevent a hard border in Ireland, an issue which appears to be as important to the EU as to the UK.

Nikos then presented a well-known slide prepared by Michel Barnier highlighting the red lines imposed by Theresa May on the EU in her unhappy negotiations with the EU. These red lines included no bowing to the jurisdiction of the European Court of Justice, no free movement of labour, no substantial financial contribution from the UK to the EU, regulatory autonomy and an independent trade policy. These demands immediately ruled out any of the existing agreements that the EU has, for example with Norway or Switzerland, and left only a Canada (or Korea) type agreement which could be entertained by the EU.

However, such a Canada plus agreement does have tariffs even though some technical barriers to trade may be removed with such an agreement. If tariffs are applicable, then the hard border problem in Ireland will still apply.

In summary, therefore, there could be no third solution, and the only deal that could be entertained would be either a customs union or an acceptance of a hard border. Besides Northern Ireland and the Irish Republic refusing to accept a hard border, one cannot rule out the risk of Scotland declaring UDI and becoming independent from the UK. Indeed, with its desire to remain in the European Union, one can hardly blame the Scots for their continued pursuit of independence which could bring about the disintegration of the United Kingdom.

Isabel Albarran of Close Brothers Asset Management then discussed the potential economic consequences of Brexit, deal or no-deal. To date, Isabel commented that Brexit had not had a devastating effect on the UK economy, in part because record-low unemployment, resulting in strong wage growth, has fuelled consumer spending. However, corporate investment in the UK has suffered, which may hinder productivity growth. Given the high weighting of globally-exposed businesses in the UK equity index, Brexit is but one factor for these companies, for which the impact on the global economy of slower Chinese growth and the Sino-American trade war may be more relevant.

So if I may be allowed to summarise the way I have interpreted our meeting, and what I would like to happen to resolve the impasse.

Mentally, Brexit has already happened in both the UK and the EU and a no-deal by October 31 is extremely likely, given the limited time available. Moreover, in the absence of a cross party agreement between the Conservatives and Labour, a customs union deal is unlikely. This means a hard border with Northern Ireland is inevitable in the short term – unless (and this is my hope) a Churchillian or Thatcheresque strong politician stands up within the Tory party and revokes Article 50 on the basis that the Brexit no-deal has been rejected by parliament and is not what the majority of the public wanted when voting in the June 2016 referendum. A general election could then be called where parties define exactly what they will accept as a Brexit arrangement with the EU and a new round of negotiations will then ensue with the EU. This is likely to result in some form of customs union to benefit trade for the French agricultural industry, the German car industry, and all the other EU countries including the UK. Something like a European Common Market! Sounds familiar? Well it was what we all wanted in 1973 and wouldn’t it be great to get back to that vision!

Roy Saunders is the founder and chairman of IFS Consultants and IBSA, a global community of entrepreneurs and professional advisors from a wide spectrum of disciplines, dealing with international business structuring and regulatory compliance across multiple jurisdictions

Gesy has highlighted the unfair treatment of British Cypriots