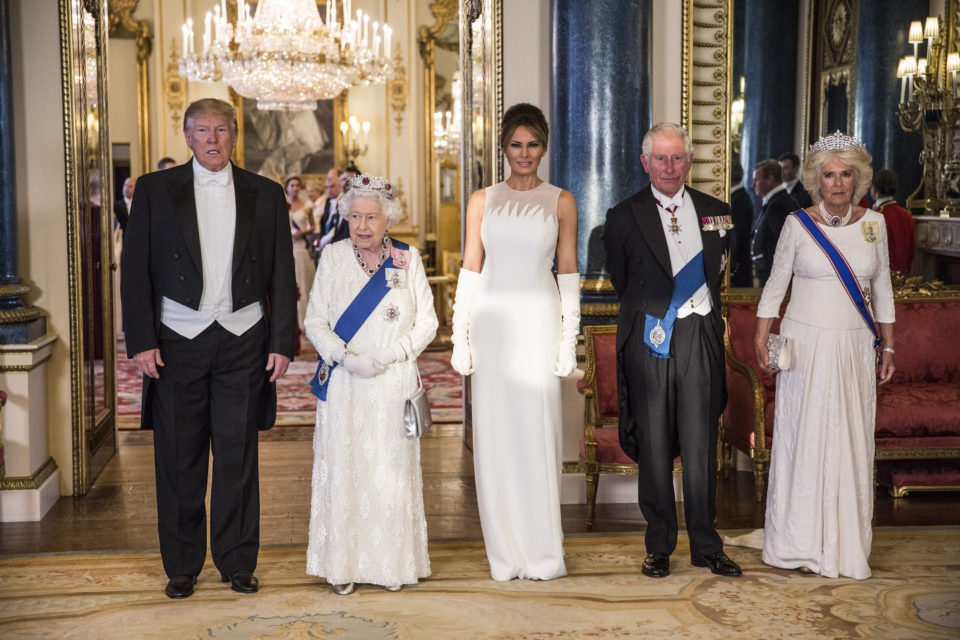 US President Donald Trump, Queen Elizabeth II, Melania Trump, the Prince of Wales and the Duchess of Cornwall

Queen Elizabeth II and Prince Charles hosted a state banquet for President Donald Trump and the First Lady at Buckingham Palace last Monday. Like most Americans Donald Trump loves burgers but when a head of state is invited to a state banquet one hosts the office not the man so one could not lay on a burger feast.

So Trump had to make do with haute cuisine and forget about junk food. The menu had to be traditional British which meant it had to be in French. In plain English they had steamed filet of halibut to start, English spring lamb for main course and a strawberry tart for dessert rounded off with fresh fruit. For those who like a glass or two there was top quality claret and a local sparkling white from Windsor Park.

So far as I know halibut is not available in Cyprus but I shall make enquiries at Zephyros, my favourite fish restaurant in Larnaca, next time I visit. As for English spring lamb it is so good this time of the year you can have it pink if, like me, you are an unreconstructed carnivore.

In Cyprus lamb is well cooked. Lamb kleftiko is a favourite. It is cooked in the style of Greek brigands in Ottoman times called kleftes who stole sheep and cooked the meat in sealed clay ovens to avoid detection – the song na ‘tane to ekosi ena’ was inspired by the kleftes. Lamb souvla is another favourite. Cuts of shoulder of lamb are grilled on the spit rotating over red hot charcoal billowing smoke and a fragrance that delights the nostrils and the palate. My favourite establishment for both these dishes is Milidzis along the sea-front in the Turkish quarter of Larnaca.

I love all these bits of useless information; they add spice to life and there is nothing more human than people breaking bread together. Christianity’s most iconic painting is Leonardo da Vinci’s Last Supper that depicts Jesus surrounded by his disciples discussing betrayal, sacrifice and salvation. They had bread and red wine and pickled fish and stewed beans – a dish not unlike fasolada, Cyprus’ national dish – haricot beans soaked and softened overnight and stewed slowly in water with onions, celery and fresh tomatoes, sprinkled with fresh coriander, served with olive oil and lemon juice and eaten with raw onions, black olives and traditional bread – yum!

In Cyprus food trumps politics. Way back in the days when contact across the green line was minimal a Greek Cypriot friend was invited to lunch with the late Rauf Denktash, the Turkish Cypriot leader, in northern Nicosia. Denktash was on good form. He was in a gregarious, witty mood gossiping and taking pictures. Upon my friend’s return to southern Nicosia, however, the first question he was asked by friends was ‘ti se taise’ – Cypriot Greek for what did he feed you?

My friend does not drink so I did not ask what they drank. Trump famously does not drink; not because of any religious conviction I hasten to add. Apparently his brother was an alcoholic and died prematurely of the demon drink. His death had a profound effect on Trump who vowed never to touch the stuff, which shows that he is a rational man who, for all his bravado and braggadocio, is having fun playing the fool rather than actually being the charlatan he pretends to be.

Like many New Yorkers Trump is very competitive, so not to be outshone by the pomp of the state banquet, the president and the first lady hosted a black-tie dinner at the US ambassador’s residence in Regents Park for Prince Charles and the Duchess of Cornwall and guests. I am not sure if it accords with state protocol to be both a guest and a host while on a state visit but the normal rules do not apply to this president.

The menu at the dinner hosted by the Trumps was in English: tomatoes with mozzarella and basil to start followed by grilled filet of beef served with potatoes and veg and vanilla ice cream to finish. The wine was a Chardonnay White and a Pinot Noir red – both relatively young and both from California.

On the third day of his state visit the US president and his entourage went off to Portsmouth to commemorate D-Day and the Normandy invasion where they were joined by the queen, her prime minister, President Emmanuel Macron of France and Chancellor Angela Merkel of Germany among others.

No one in Britain gets uptight about calling the Normandy landings an invasion nor that the German chancellor attended despite the fact the Germans were the enemy. This is what it means to be civilised. The Germans fought well in defence of their positions in Normandy and beyond, even though they were fooled into believing the invasion would take place at Calais. Apparently Adolf Hitler was blissfully unaware of the invasion until he woke up at 10 in the morning of 6 June 1944. As for Field Marshall Erwin Rommel he was in Berlin scheming and plotting.

But modern Germany has moved on and transcended the defeat of Nazi Germany, though many Germans wish the British would stop going on about the war. To be fair to the Brits they do laugh at themselves for doing so, brilliantly portrayed by John Cleese in the hilarious ‘don’t mention the war’ episode in Faulty Towers.

The meticulous preparations for the Normandy landings shown on television immediately after the lavish banquets at Buckingham Palace and Regent’s Park got me thinking about the soldiers’ combat rations during the Normandy campaign.

It was Napoleon Bonaparte who said that an army marches on its stomach and in Nato operations soldiers from other countries love the French army’s combat rations. As for the GIs who took part in the Normandy campaign they had to make do with a peanut bar, bouillon powder, canned meat, a powdered beverage, chewing gum and cigarettes – much maligned during these anti-smoking times, but your best friend in wartime.

The embarrassing thing about Trump and his national security adviser, John Bolton, in matters military is that they avoided serving their country in Vietnam and undergoing the privations of war – culinary or existential – and would probably have avoided the Normandy landings if they were around.

That apart, overall Trump’s state visit was a success. But the problem with the Trump administration compared to Franklin Delano Roosevelt’s during World War II is that America under Roosevelt was a force for good. After Roosevelt’s New Deal in the 1930s America was initially reluctant to enter World War II. But she did so after being attacked at Pearl Harbour and came to Europe’s assistance after she entered the war and helped with economic reconstruction afterwards. Under Trump, America is sabre rattling in the Gulf after pulling out of the Iran nuclear treaty and, as if that were not bad enough, she is encouraging Britain to turn her back on Europe and fomenting an economic war against China.

Roosevelt was a patrician politician with class. He was by far the best US president in the 20th century and his wife, Eleanor, the best first lady.

He followed his cousin Theodore Roosevelt’s advice: ‘to speak softly and carry a big stick,’ and Eleanor, who was also a Roosevelt, would have routed Trump had she been the first woman candidate.

They don’t make them like the Roosevelts any more.

Why we need sleep: the perils of sleep deprivation