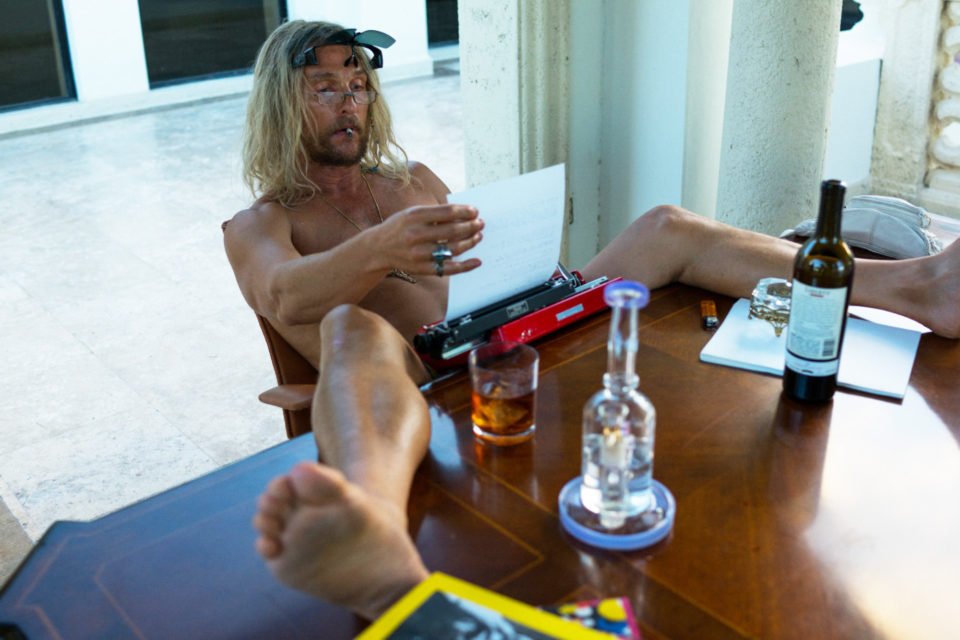 I’d love to know what Harmony Korine said to raise the money for The Beach Bum (not crazy money, only about $5 million; but still), and to have seen his investors’ faces when they watched the finished product. I presume he came on like Moondog (Matthew McConaughey), the hero of this one-of-a-kind comedy, who gets away with everything – or almost everything – just by being breezily, blissfully carefree. “I’m a reverse paranoiac,” he jokes at one point, meaning he believes that people are conspiring to make him happy. Moondog is also a poet, which is no coincidence. The Beach Bum, along with the similarly love-it-or-hate-it Mandy, may well be the only bit of poetic cinema we’ve had at the multiplex all season.

I’d like to just sit back and say ‘I loved it’ – but it’s not so simple. For a start, I felt embarrassed for the other people in the theatre, who’d surely been lured by the poster to expect something more conventional; much as we like to tout the big-screen experience, this is a film to watch at home with like-minded friends and illicit substances. (The two anti-drug PSAs before the movie – one saying ‘Choose life’, the other speaking vaguely of “smoke” – only made it more surreal.) More importantly, the film isn’t perfect, indeed it’s actively annoying. Moondog is impervious to everything, including being a dramatically satisfying character. At some point, The Beach Bum starts to feel like listening to a long shaggy-dog story and waiting, increasingly impatiently, for the punchline.

The film is a cousin to those ‘Bad [Whatever]’ movies made in the wake of Bad Santa, films with a one-note protagonist – only here the one note isn’t how cynical and misanthropic Moondog is but the opposite, how dreamy and hedonistic and teeming with love (and lust) he is. He bums around the beach town of Key West in Florida, constantly neck-deep in booze, weed, and excess in general. He wears open-necked shirts with flowery patterns, switching halfway through to women’s clothes for reasons not wholly explained. He recites a poem about his penis – but it’s actually a tender love poem, telling the beloved how his member reminded him of having sex with her, “and it made me feel beautiful”. Life’s a bowl of cherries for our hero, not unlike the bowl of cherries he sets on his chest while making love to a pair of lovelies on a big yacht.

There’s complexity, at least at first. Moondog is ‘a character’, but he’s also a pain. He forgets things – including his daughter’s wedding – and is unreliable. He’s a has-been, his literary career on the skids. (Jonah Hill does a hilarious cameo as his agent, other guest stars including Zac Efron and Martin Lawrence.) He’s rich, or married to a rich woman (Isla Fisher as ‘Minnie’), and undoubtedly a parasite. There’s also a deeper issue, implied in Peggy Lee’s classic ‘Is That All There Is?’ – played in full on the soundtrack – a certain joyless boredom in such unremitting joy. Our moral compass, sharpened by years of religion and Hollywood movies, waits for Moondog to be brought down a peg, or at least to see the error of his ways; the second half – we assume – will be different, and all the more dramatic for it. But that’s not who Korine is. He’s the man who came to prominence at 22 for writing Kids, a film about New York youngsters hanging out and having sex (it was shocking because they were kids; but really, they were just having fun). His previous film was Spring Breakers (2012), a garish ode to conspicuous consumption. He’s the poet of pleasure.

The Beach Bum is very unfashionable, which is partly why it’s intoxicating. Western culture is increasingly Puritan, preaching abstinence and moderation, far more concerned with oppressed minorities than the antics of a rich, privileged white man. But there’s something else as well, another reason why the film is so audacious. An early scene shows Moondog and his buddy Lingerie (Snoop Dogg) puffing from a sizeable bong – but the real point of the shot is that it’s sunset, and they’re standing by the water, and the last rays of sun gleam orange in the distance, and the lights of buildings shine in the otherworldly way that comes with twilight; the hazy visual texture is what makes it. Korine’s secret mission – working with the great cinematographer Benoit Debie – is to smuggle in beauty through the guise of a stoner comedy.

Moondog isn’t really a likeable character. He’s thoughtless, “crude and reckless” as a judge puts it, rude and judgmental with people he doesn’t like. He’s anti-social, and occasionally criminal. The Beach Bum isn’t ‘charming’ per se, nor is it cosy in the style of 80s stoner comics Cheech & Chong, though they’re surely among its presiding spirits (film buffs will also catch nods to surrealist icons Jean Vigo and Luis Bunuel). This is anarchic anti-cinema that doesn’t really care what you think, and will surely strike a lot of people as deeply unfunny; I admit it drove me nuts sometimes (the wall-to-wall tinkly music is a bad idea), but it’s clearly an original. “You just kind of have to accept that he’s from another dimension,” says the tolerant Minnie, putting up with Moondog’s erratic behaviour. “And you have to love him for it.” Sounds about right.