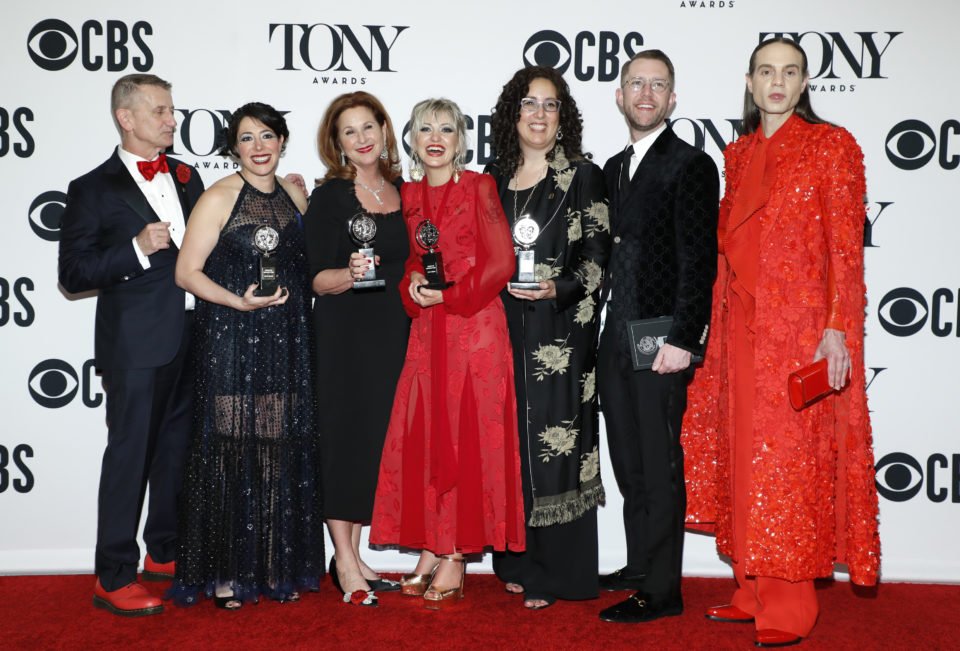 Director Rachel Chavkin noted she was the only woman currently directing a Broadway musical and called for the theater world to step up. “It is a failure of imagination,” she told the audience.

“The Ferryman,” British playwright Jez Butterworth’s wrenching examination of a family during the sectarian violence in Northern Ireland in the 1980s, won best play and best director for Sam Mendes.

Bryan Cranston won his second Tony as the unhinged television anchor man in “Network,” a stage adaptation of the 1976 movie.

Elaine May, 87, was named best actress in a play for her moving performance as a mentally declining woman in “The Waverly Gallery.” May, a director, writer and actress is also known for her comic partnership dating to the 1950s with late film director Mike Nichols.

The best actor in a musical Tony went to Santino Fontana for “Tootsie,” the hit show based on the 1982 movie, while Stephanie J. Block took home the lead actress award playing music legend Cher in “The Cher Show.”

Block thanked “the goddess Cher, and her legacy.”

“The Boys in the Band,” a comic drama about a group of gay men at a birthday party first produced in the late 1960s, won best play revival.

The supporting musical actress Tony went to Ali Stroker for a reinvented staging of the classic musical, “Oklahoma!,” which won best revival of a musical.

Stroker, as the “girl who can’t say no” Ado Annie, became the first actor performing in a wheelchair to win a Tony.

Supporting actress in a play went to Celia Keenan-Bolger, 41, as the child Scout in “To Kill a Mockingbird,” while English actor Bertie Carvel won his first Tony as media mogul Rupert Murdoch making his foray into newspaper publishing in “Ink.”

Following is a list of winners in key categories:

Best Revival of a Musical: “Oklahoma!”

Best Revival of a Play: “The Boys in the Band”

Best Actress in a Play: Elaine May, “The Waverly Gallery”

Best Book of a Musical: “Tootsie”

Best Direction of a Play: Sam Mendes “The Ferryman”