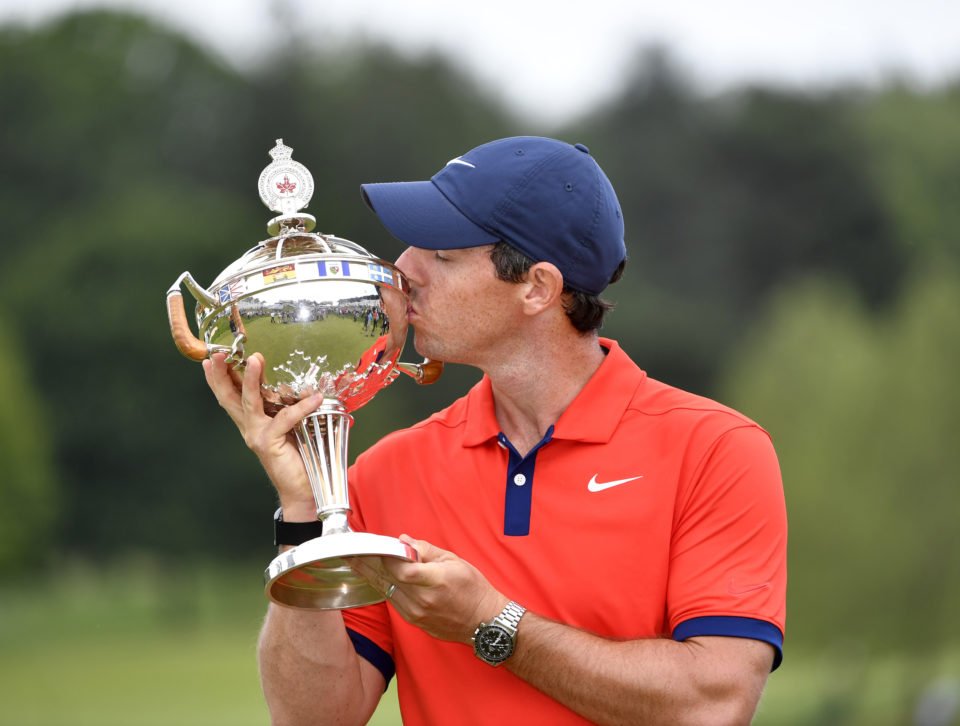 Rory McIlroy threatened to shoot 59 but fell just short as he made his Canadian Open debut a great one by clinching a seven-stroke victory in Ontario on Sunday and then said it was only mission half-accomplished.

McIlroy carded a stellar nine-under-par 61 in the final round at Hamilton Golf & Country Club, matching his career-best score on the PGA Tour.

The four-times major champion finished at 22-under 258, while Ireland’s Shane Lowry (67) and American Webb Simpson (68) tied for second place on 15-under.

It was a near perfect confidence-booster ahead of next week’s U.S. Open at Pebble Beach.

“I’ll probably enjoy tonight and have a couple of drinks on the plane on the way to Pebble, but once I get up in the morning in California I’m not going to going to think about this week,” he said. “I’m just going to know my game’s in good shape and try to win another major.”

Sunday’s triumph was McIlroy’s 16th on the PGA Tour, and he has now won a national championship in six different countries — after previous successes at the U.S. Open, British Open, Irish Open, Australian Open and Hong Kong Open.

McIlroy rated the win his best since the 2015 Wells Fargo Championship at Quail Hollow in North Carolina and noted he had also won the week before the 2014 PGA Championship, his most recent major victory, so hoped to repeat that experience next week.

“It was almost as if I was playing an eight-round tournament, and that’s how I feel here. I’ve played really well these four days and it sets me up for next week.”

McIlroy made his intentions clear from the first hole on Sunday, where he launched a 350-yard drive and then struck the pin with his pitch shot from 40 yards.

The tap-in birdie gave him the solo lead and he never looked back, adding eight more birdies to get to nine under par for the round after 14 holes.

“To start the day tied for the lead, and to play like that, it gives me a lot of confidence,” he said.

“I wanted to be aggressive from the start, I was, four-under through five holes and that really established I was in control of this tournament.

“When I birdied 13 my goal went from winning the golf tournament to shooting something in the 50s.”

After a bogey at the par-four 16th, McIlroy bounced back with a tap-in eagle at the par-five 17th thanks to a seven-iron 200-yard approach, and the chance of a 59 was back on with a birdie on the par-four 18th.

McIlroy, however, pushed his approach into a greenside bunker.

He tried to hole the 35-foot sand shot but his ball trickled past the hole and he made a bogey after missing a sharply-breaking seven-foot putt.

“I didn’t quite do it,” McIlroy said.

“A couple of loose shots down the stretch but I was chasing it, trying to make birdies, and sometimes you’re going to make mistakes when you do that.”

Water cuts in parts of Limassol on Wednesday