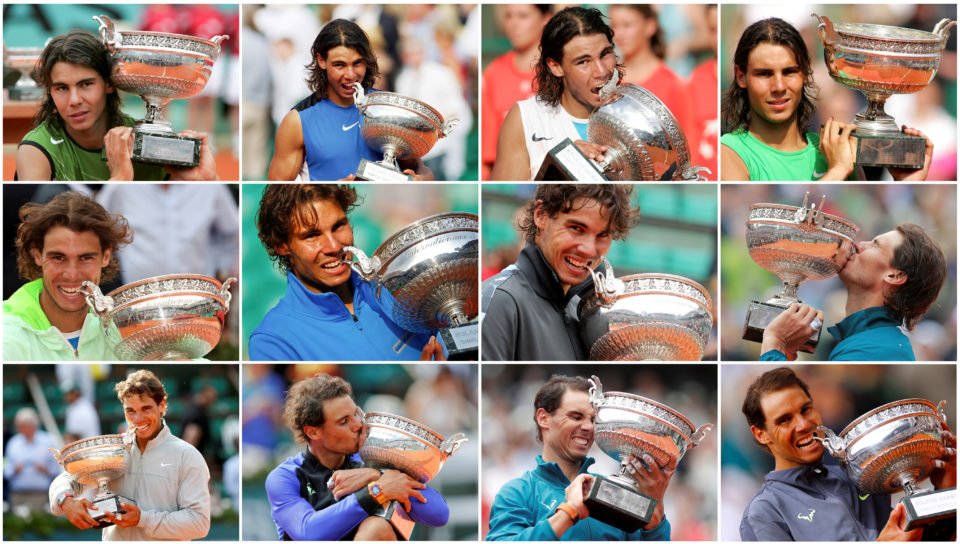 Rafael Nadal took sole ownership of one record when he claimed a 12th French Open title on Sunday but says matching Roger Federer’s haul of 20 Grand Slams will not become an obsession.

The Spaniard once again showed he is invincible on the Parisian clay as he beat Austrian Dominic Thiem 6-3 5-7 6-1 6-1 on his favourite Court Philippe Chatrier.

No other player has won the same Grand Slam title as many times as his dozen at Roland Garros, Sunday’s triumph taking him past Margaret Court’s 11 Australian Open titles.

It was pointed out to the 33-year-old Spaniard a few hours after he walked off court that he is now just two behind 37-year-old Federer’s record haul, with time on his side.

“Being honest, I am not very worried about this stuff, no?” Nadal told reporters.

“You can’t be frustrated all the time because the neighbour has a bigger house than you, or a bigger TV or better garden. That’s not the way that I see the life, you know.”

Nadal has suffered more injuries throughout his career than Federer and Serbian world number one Novak Djokovic, who is third on the all-time list of major winners with 15.

Even this season he has been plagued with knee injuries, being forced out of his Indian Wells semi-final with Federer before withdrawing from Miami.

His knees were still bothering him as his happiest hunting season began on the European claycourts he has owned.

“I lost, I think, around 15 or even more Grand Slams in my career for injuries,” Nadal said. “So it has been difficult.”

Watching him repel the swashbuckling Thiem on Sunday with the kind of intensity and sheer willpower that has marked his career, it was hard to believe that just a few weeks ago in Barcelona he was suffering a crisis of confidence.

Thiem beat him in straight sets in Barcelona and Nadal said it was at that tournament he realised he needed to change his mentality.

“Mentally, I lost a little bit of energy, because I had too many issues in a row,” he said.

“Mentally I was not enjoying. Too much worried about the health and, being honest, too negative.

“One possibility would have been stop for a while and recover my body. And the other was change drastically my attitude and my mentality to play the next couple of weeks.”

Sunday’s display proved he made the correct call.

Help for some Pissouri homeowners but no compensation says minister