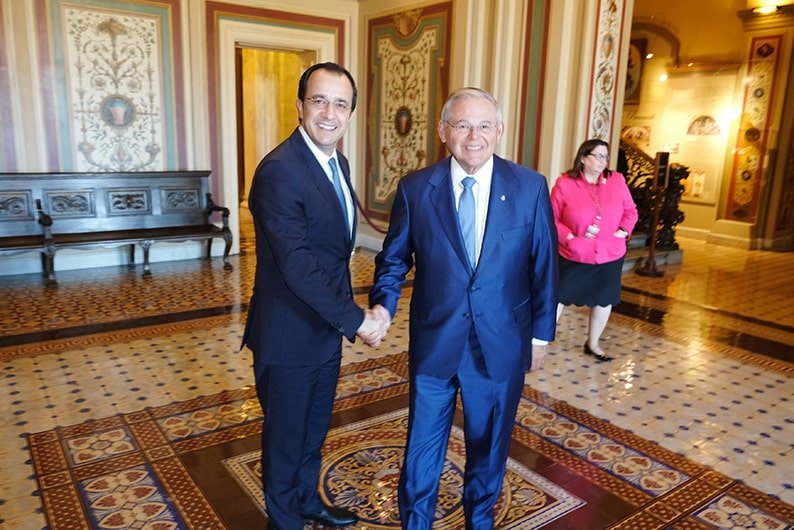 Ruling Disy and opposition Akel traded barbs for a second day on Tuesday over the proposed bill to lift the decades-old US arms embargo on Cyprus, the latter suggesting it was in reality a smokescreen to target Russian influence in the region.

The Eastern Mediterranean Security and Energy Partnership Act of 2019 has been tabled to the US Congress by Democratic Senators Robert Menendez and Marco Rubio and provides for the lifting of the arms embargo, the creation of a US-Eastern Mediterranean Energy Centre to facilitate energy cooperation between the US, Israel, Greece, and Cyprus, along with $2m for International Military Education and Training (IMET) assistance for Greece and $2m for Cyprus.

The part of the bill Akel has taken issue with is a reference to Russia. The bill would require the US administration to submit to Congress a strategy on enhanced security and energy cooperation with countries in the Eastern Mediterranean, as well as reports on “malign activities by Russia and other countries in the region”.

While the government and ruling party have welcomed the bill, Akel has been grumbling for months.
On Monday party spokesman Stefanos Stefanou said that while Akel welcomed the lifting of the “unfair” embargo, the bill had a wider purpose.

“This bill is not just about lifting the arms embargo to the Republic of Cyprus, as the government presents, but it is part of the promotion of US foreign policy in the region,” he said.

“What the bill is aiming at is the inclusion of Cyprus in the wider US plan to prevail in a competition with other countries like Russia, China and Iran in the wider region”.

This, he added, was not only problematic for Cyprus but dangerous, and it also jeopardised relations with other countries “which Cyprus needs at least as much as the US”.

“Anyone can read it and judge whether it is a text about support for Cyprus or a text dealing with confrontations with third countries,” Stefanou added.

Responding on Tuesday, Disy leader Averof Neophytou said Akel’s attitude had come as an unpleasant surprise, and it was wrong.

“After 30 years of struggles mainly by the Cypriot community [in the US] but also of the Republic of Cyprus, there is finally this bill to lift the arms embargo,” he said, adding that it did not mean “we will go tomorrow to order weapons”.

Neophytou said what was important was the political message at this particular time when Turkey was violating the island’s exclusive economic zone. “While the US is ready to sanction Turkey, at the same time Republicans and Democrats – and that’s the big message – have tabled a bill to lift the embargo on Cyprus,” Neophytou said.

“Cyprus needs the support of powerful countries,” said Neophytou. “There is a dual message from our friends in Washington. On the one hand, they note positively the strengthening of our relations but also there is a parallel message to Turkey that its privileged and monopolistic relationship with the US cannot continue.” He didn’t address Akel’s concerns about alienating Russia, which as a member of the UN Security Council is also a “powerful country”.

Akel responded Tuesday saying they couldn’t believe that Neophytou and the government did not understand the real implications of the bill. “This bill, by integrating Cyprus into US foreign policy goals in our region, damages the vital interests of our country and creates dangers,” Stefanou said.

“Our rulers are always claiming that our foreign policy is and should remain balanced. They often declare that the Russian Federation is a very important partner in every respect so how can they celebrate this bill when it overturns that balance and negatively affecting Cyprus’ relations with Russia.”