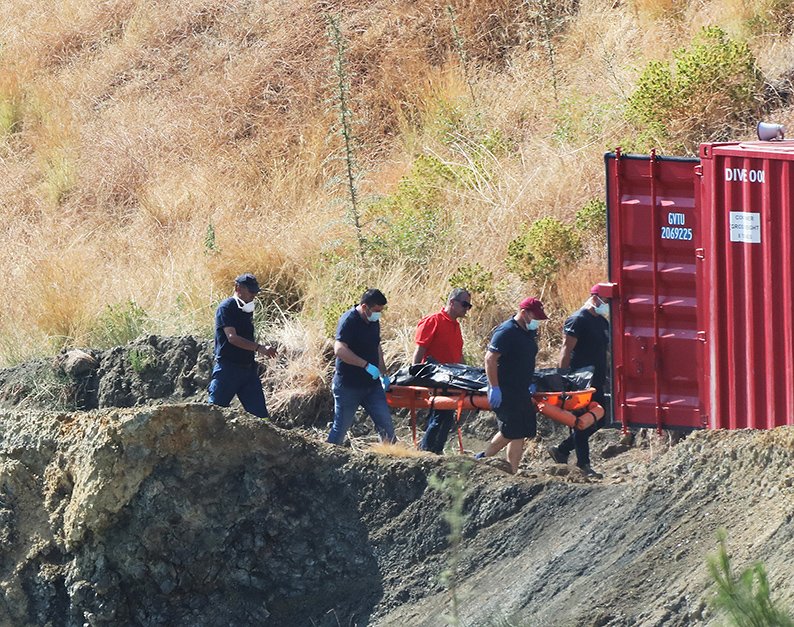 After a search lasting nearly two months, the badly decomposed body of six-year-old Sierra, one of the seven victims of a serial killer, was finally found on Wednesday afternoon.

The main suspect, 35-year-old Nicos Metaxas was taken on-scene to lake Memi on Wednesday morning, where he indicated to police an area of the lake that differed from the area he had pointed to during a previous walk-through, and where search efforts had so far been focusing.

Authorities had announced earlier in the day they were preparing to pump some water out of lake Memi in Xyliatos where investigations were ongoing to locate the remains of Sierra, but by 2.30pm a small sized body wrapped in a sheet which was bound with rope and tied to a cement block was found six metres deep in the area where Metaxas had indicated.

Sierra Graze was the daughter of Mary Rose Tiburcio, 39, from the Philippines, another of the seven victims of five women and two girls.

Earlier in the month, the owner of the private diving company hired by authorities in the search for Sierra and another body in the Mitsero red lake, which was recently recovered, said the chances of finding the body of the six-year-old were very slim because the lake is around 60 metres deep with many underwater ravines.

On Wednesday it emerged that Metaxas had also reportedly admitted to strangling Sierra, as he had done with her mother and the majority of his victims, changing his initial confession in which he told police that Sierra had choked on her own vomit before he dumped her body in lake Memi. Reports said that Metaxas had deliberately misled authorities when he initially indicated where he had dumped the little girl’s body.

Authorities had been searching for Sierra’s remains for almost two months since Metaxas first supposedly showed police where her body was. Mother and daughter had been reported missing by their roommate on May 5, 2018.

Sierra was the last of Metaxas’ seven victims to be found. The serial killer admitted to killing the girl, along with her mother. Tiburcio was the first of the victims recovered after being accidentally found inside a mine shaft on April 14, uncovering what has become the first recorded case of a serial killer on the island.

Metaxas is currently in custody pending the completion of police investigations.

With the retrieval of Sierra’s body the police will be requesting a renewed remand for Metaxas on Friday to allow time for the completion of the investigations, police spokesman Agnelos Angelides said, once again postponing the charging of Metaxas with the crimes of murders, kidnapping, abduction, rape, indecent assault, attempting to destroy evidence and obstruction of justice among others.

Government spokesman Prodromos Prodomou reminded the public on Wednesday that there was no need to organise fundraisers to cover the funeral costs of the victims, as the cabinet had agreed in May that all costs will be shouldered by the government.

Greece in disarray after shock Euro qualifier loss to Armenia