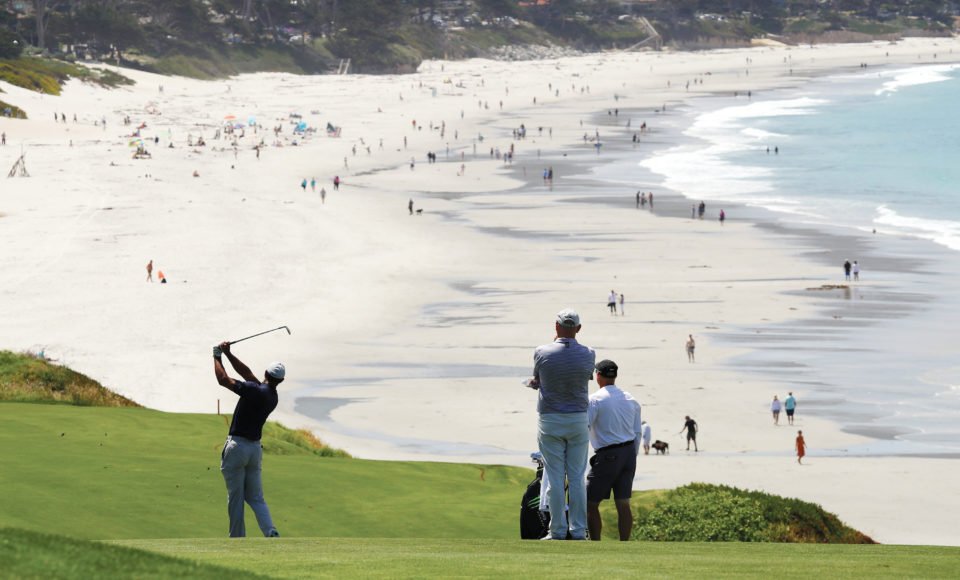 A premium iron player will likely win this week’s U.S. Open at Pebble Beach, where Zach Johnson has almost as good a chance of prevailing as Dustin Johnson in the third major championship of the year.

Brooks Koepka deserves his billing as championship favourite, with Rory McIlroy and Dustin Johnson right behind him, while Tiger Woods will no doubt capture the most attention.

The expert consensus, however, is that dozens of players could win a wide-open Open, much like in 2010, when then-37th ranked Graeme McDowell triumphed, one stroke ahead of the longest of long-shots in Gregory Havret.

Many more players are likely to be in the mix at Pebble than at the recent PGA Championship at Bethpage Black, a beast of a layout which all but eliminated the shorter hitters from contention even before they teed off.

It was hardly a co-incidence that Koepka and Dustin Johnson finished first and second.

But Pebble Beach, which will play to a par of 71 at 7,075 yards for the Open, is considerably shorter, and the fairways should offer plenty of roll.

A lot of them will be narrow, and the rough will be old-style U.S. Open, thick and penal, placing a premium on accuracy off the tee.

“I think it opens the door for so many types of players. At Pebble Beach, course knowledge is as important as any event they’ll play in the U.S. Open, really knowing where to place the ball on the greens.

In major champions Jim Furyk and Zach Johnson, he was referring to short hitters who are not at a disadvantage on courses where bombing drives 300 yards is not a prerequisite.

Faxon, who will be part of the Fox broadcasting team on American television, was perhaps the best putter in the world in his day.

He says the green contours at Pebble are severe.

“Every single hole, you can find as much break as you’ll see on any putts you’ll hit all year,” he said.

“There is rarely a putt on any hole that you’re not playing a ball two or three balls outside the hole on the shorter putts.

“There are a lot of tricky reads there, people might call it the ocean factor, breaks going in a certain direction but having played that course a lot you get to know and understand the breaks.”

Which brings us to Woods. If he misses a putt it won’t be for lack of course knowledge at a venue where he piled up his greatest ever performance, a record 15-stroke victory at the 2000 U.S. Open.

Whether Woods can contend for a 16th major title is just one of the abundant storylines that will captivate fans worldwide.

Can six-time Open runner-up Phil Mickelson complete the grand slam on a course where he won the Pebble Beach Pro-Am four months ago?

Can Dustin Johnson finally add a second major to his resume, nine years after being the 54-hole leader there before blowing up early in the final round.

Can Koepka become the first man to win three consecutive U.S. Opens in more than a century?

Can McIlroy, brimming with confidence after his Canadian Open victory on Sunday, end a five-year major drought and become the second Northern Irishman in a row to win a U.S. Open at Pebble?

Can the United States Golf Association avoid a similar debacle to last year at Shinnecock Hills, where the 13th and 15th greens became almost unplayable during the third round?

The answers will be revealed over four days, but one thing clear is that Pebble Beach has established itself as the premier U.S. Open venue, and whoever lifts the trophy on Sunday will have a special place in golf history.

Hamlet to be staged at Curium