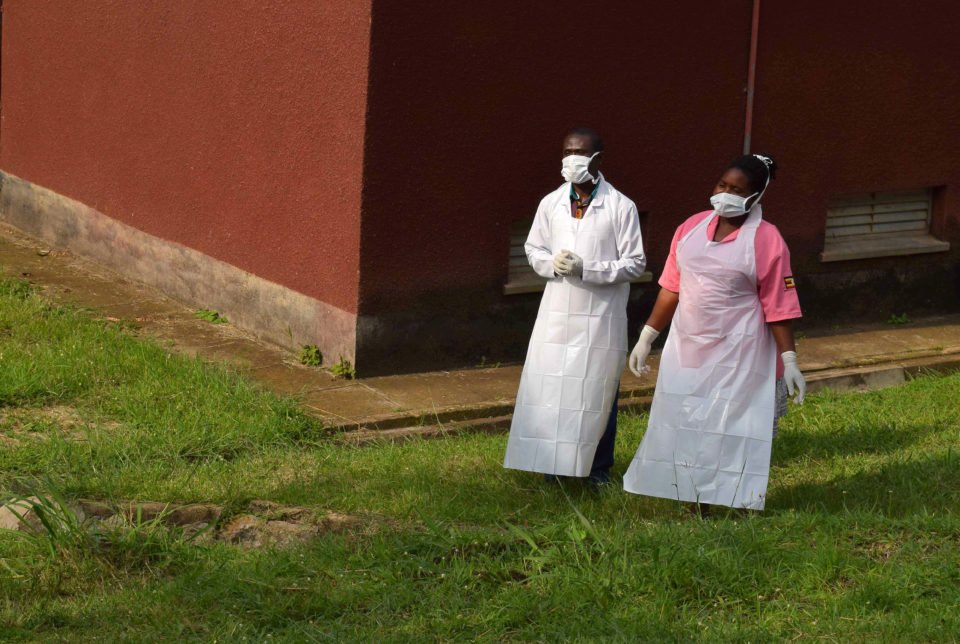 FILE PHOTO: Ugandan medical staff outside ebola preparedness facilities at the Bwera general hospital near the border with the Democratic Republic of Congo in Bwera, Uganda, June 12, 2019. REUTERS/Samuel Mambo/File Photo

KAMPALA, June 13 (Reuters) – A Congolese woman has become the second patient in Uganda to die of Ebola since the virus crossed the border from the Democratic Republic of Congo and two other people remain in intensive care, a health ministry official said on Thursday.

The 50-year-old woman was the grandmother of a five-year-old boy who died on Tuesday evening after crossing into Uganda with his family from Congo, the ministry said.

Ainebyona said the two other patients being kept in isolation were the three-year-old brother of the dead boy and a 23-year-old Ugandan man who displayed Ebola symptoms.

Test results for the 23-year-old are expected later on Thursday, he said, adding that a total of 27 contacts are now being monitored.

Uganda has banned public gatherings in the Kasese district where the patients are being treated, Ainebyona said.

The current Ebola epidemic began in August last year in eastern Congo and has already infected at least 2,062 people, killing 1,390 of them. The infections in Uganda confirmed that the deadly outbreak has spread for the first time beyond the Democratic Republic of Congo.

Uganda, which has been on high alert for a possible spread of Ebola and has already vaccinated many frontline health workers, is relatively well prepared to contain the virus.

The World Health Organization (WHO) is bringing in 3,500 additional vaccines and will begin vaccinating more people on Friday.

The WHO has said it will reconvene an emergency committee on Friday to decide whether the outbreak is an international public health emergency and how to manage it.

Authorities have struggled to contain the disease partly because health workers have been repeatedly attacked in conflict-ravaged eastern Congo, the epicentre of the outbreak.