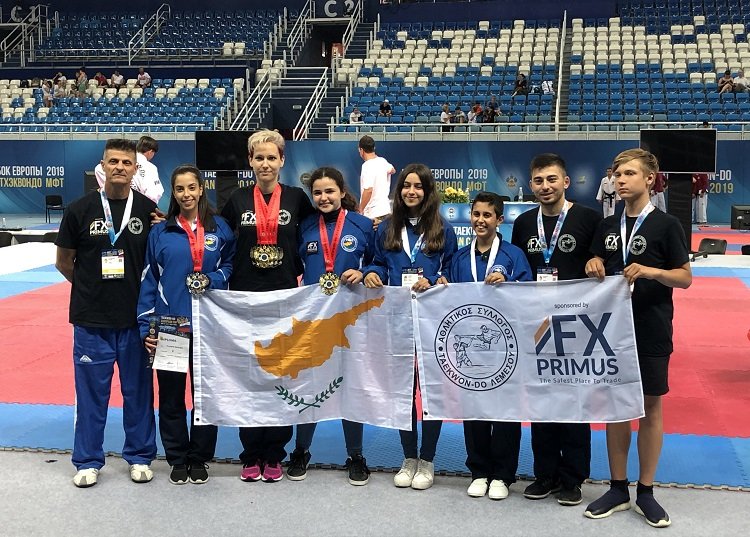 The 10th Taekwon-do Open European Cup 2019, took place on 6 -9 June in Iceberg, Sochi, Russia and Fanni David was there representing Cyprus. As Fanni returns with 4 medals for Cyprus, we caught up with her in this exclusive interview to learn about her background, journey to success and best memories of Russia.

Fanni – Congratulations on your victory! Tell us about the competition and your team

The competition was an amazing experience! It took place in Iceberg skating palace, a huge architectural wonder that hosted the 2014 Winter Olympics. Basically, we were competing on top of the ice, which gave the whole event a special feel: even though the ice was covered, the ground under our bare feet was still wet and cool.

If the venue’s grandeur was not enough to make participants feel humbled, this year’s European Cup was the most successful of all, with approximately 1000 competitors from 29 European, Asian and South-American countries. All these give weight to the fact that Cyprus achieved the distinguished 5th place on the ranking list by the end of the tournament. It is a fantastic result, for such a small country represented by only 7 competitors to get such a high ranking among all those prestigious nations. We managed to emerge from the state of being unknown, thanks to the talent and dedication of our team members.

I personally won 4 of the 6 medals. One gold in sparring, silver in power test (wood-breaking), bronze in patterns and another bronze in special techniques (high jump-kicks). In sparring, we won another gold and a silver by the rest of the team. I’m very proud of my team mates for their spirit and energy in the tournament. I am the national champion since I started a career in Taekwon-do in 2016, and I also represented Cyprus at the previous European Cup in Sibiu, Romania (2018), where I was the gold medalist in sparring. I’m glad I managed to defend my title.

How did it feel to represent Cyprus?

One would assume that representing Cyprus as a Hungarian is not the same as representing your home country. I have never represented my own country in my life, so I couldn’t tell the difference. All I can tell is that I’m proud to be the champion of Cyprus, and I was moved when I first took Cyprus’ flag to the podium during last year’s awarding ceremony. I never regarded myself as a Cypriot, but in that moment, I felt like one of them and my Cypriot team mates feel the same way. The Hungarian national team expressed their disappointment that I didn’t fight in their colours and I brought success to another country. But I learnt to fight in Cyprus so I’ve got to fight for Cyprus – that’s the deal.

How does FXPRIMUS support such initiatives?

When I’m not training, I’m working as a Graphic Designer at FXPRIMUS. For a long time, I was a Freelance Graphic Designer, because my sport career requires great freedom, since I travel a lot and I train 3-4 hours per day. It was a struggle to find a full-time job that is compatible with my passion for Taekwon-do. FXPRIMUS pays a great deal of attention to its employees and their needs, which is a trait rare as a diamond especially in the FX sector. They are very thoughtful and generous, they appreciate talent and dedication, they support dreams and ambitions, and last but not least, they are very flexible and tolerate my unusual passions and habits to the end.  For instance, when I show up in the office in my training suit every morning! Such a supportive background is just what I need to pursue my dreams, and it’s topped up by the sponsorship FXPRIMUS provided us for this cup. I hope my Taekwon-do team managed to prove itself worthy of being sponsored in the future, as well.

What was your best memory of Russia?

Sadly, I didn’t get to visit places in Sochi other than the Iceberg stadium, as I had to be present during all four days of the event both as coach and competitor. However, from what I saw, I can tell that Sochi is a very neat, modern yet near-to-nature town, rich in huge forest parks and nice beaches. My best memory has to do with coaching the kids: helping them through the anxiety I used to have when I was new to competing; seeing them being strong for me and for the team; getting closer to them emotionally; having moments of relief and joy together, and such hard laughter that we burst into tears. (For instance, when I bit on a piece of pickled tomato at the dinner table, I managed to spray the vinegar into one of our kid’s eye sitting opposite. Right after I apologised, I bit again, and another line of vinegar hit the eye he just cleaned before. The entire scene was so comedic, we almost choked on our food from laughter and it went on for about ten minutes after the “incident”. These moments of laughing and crying together; the magic of team spirit, are worth all the stress, sweat and pain inherent to competing.

What’s next- do you have any more events coming up?

During the past half year, we took part in four competitions. Luckily, we have some time to rest now, because the only event during this summer will be a 10-day training camp in Poland. At the end of this year, we are going to attend the Open British Championships and the Quadrathlon Cup Sofia, Bulgaria. In 2020, we will have the World Cup in Koper, Slovenia and the Roma Open in Italy. These are the most important events, but we might take part in a few more competitions of Europe and Asia, depending on the sponsorship.

What would be your message to up and coming athletes in Cyprus?

Cyprus is a small island, often underestimated and overlooked for great sporting events. But I do believe that those who have been underestimated will one day achieve success. My advice is to be persistent and patient.  It doesn’t matter where you come from, aim for the top and don’t quit until you reach it.

Plant of the week: Highly poisonous plant was popular among ancient herbalists

Turkey says would retaliate against U.S. sanctions over Russian S-400s