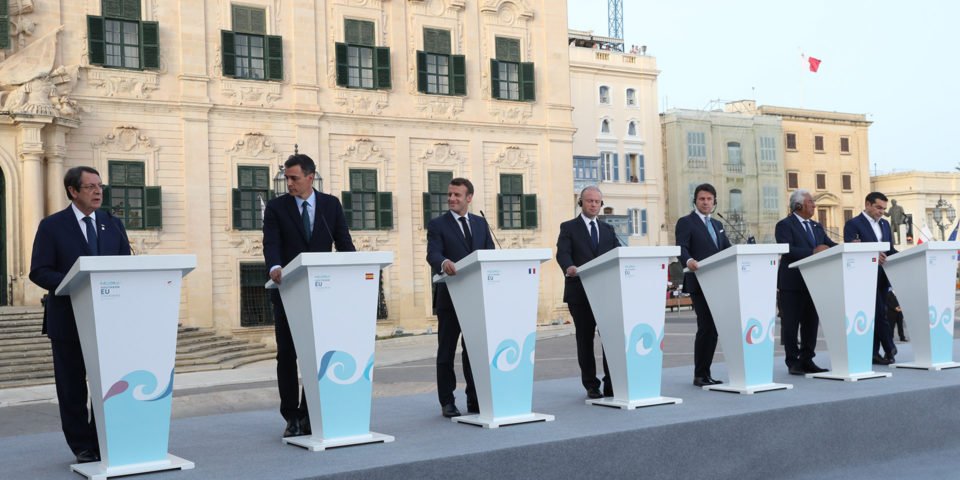 The other six southern Mediterranean EU heads of state rallied behind Cyprus on Friday in condemning Turkish actions in the island’s exclusive economic zone (EEZ) and in seeking appropriate measures by the bloc if these activities continue.

After the summit of Southern European Union heads of states in Malta, French President Emmanuel Macron urged Ankara to stop “illegal activities” in Cyprus’ EEZ and said the EU would not back down on the issue.

The bloc has pressured Turkey to drop its plans for offshore drilling for natural gas in an area some 40 nautical miles west of Paphos that Cyprus sees as part of its EEZ.

“I want to reiterate my solidarity with Cyprus and my support and respect for its sovereignty. Turkey must stop its illegal activities in Cyprus’ exclusive economic zone,” Macron said after the summit. “The European Union will not show weakness on this matter,” he said.

President Nicos Anastasiades joined the heads of state of the other six southern Mediterranean Malta, France, Italy, Greece, Portugal, and Spain who convened in Valletta.

Following the summit, French President Emmanuel Macron urged Turkey to stop “illegal activities” in Cyprus’s EEZ and said the EU would not back down on the issue.

The countries said in a joint declaration after the summit that they reiterate their full support and solidarity with the Republic of Cyprus in exercising its sovereign rights to explore, exploit and develop its natural resources within its EEZ, under EU and international law.

“We express our deep regret that Turkey has not responded to the European Union’s repeated calls condemning Turkey’s illegal continued actions in the Eastern Mediterranean and Aegean Sea and express serious concern over actual or potential drilling activities within Cyprus’ EEZ.”

The seven countries called on the EU to remain seized on the matter and, in case Turkey does not cease its illegal activities, to consider appropriate measures in full solidarity with Cyprus.

They also called on Turkey to fulfil its obligations under the negotiation framework including the full non-discriminatory implementation of the additional protocol to the association agreement towards all member states. “We reiterate that recognition of all Member States is essential. In this regard we reiterate our call on Turkey to normalise relations with Cyprus.”

Malta’s Prime Minister Joseph Muscat said that the MED7 should express their full solidarity with Cyprus on the escalating situation with Turkey.
In an introductory statement at the MED7 Summit Muscat referred among other things to Cyprus.
“Finally, we definitely also need to put pen to paper and express our full solidarity with our Cypriot friends on the escalating situation with Turkey,” he said.
This, he added, “is something which should definitely have the full support of all of us around the table.”

Anastasiades said he briefed the other leaders on Turkey’s continuing provocative actions “that unfortunately have escalated in recent weeks with unprecedented violations of international and European law and the Law of the Sea.”

He expressed his deep gratitude for their support and solidarity regarding the Turkish challenges.

“The goal is for the EU and our partners to use all diplomatic means and influence to put an end to these unlawful acts,” he said.

Greece’s Prime Minister, Alexis Tsipras, said, among other things, that the EU should look into and take concrete steps if Turkey does not end its illegal activity.

He added that anyone who does not respect international law should face consequences.

The group also said they were closely following the situation in Cyprus and, reiterated their support to the efforts by the UN Good Offices Mission “for the resumption of meaningful negotiations, leading to a viable comprehensive settlement of the Cyprus problem, in accordance with the relevant UNSC resolutions and in line with the EU acquis, values and principles.”

The solution must safeguard Cyprus’ sovereignty, independence and territorial integrity, without guarantees, rights of intervention and military presence of foreign troops, they said. “In this respect, we expect Turkey to demonstrate tangible commitment for a comprehensive settlement within the UN framework.”

The Valletta declaration also said it was of utmost importance that the EU remains actively involved in the negotiations upon their resumption and in the effort towards that end.

Cavusoglu suggests gas deal could be reached through EU

Our View: Pointless debate over exams must stop