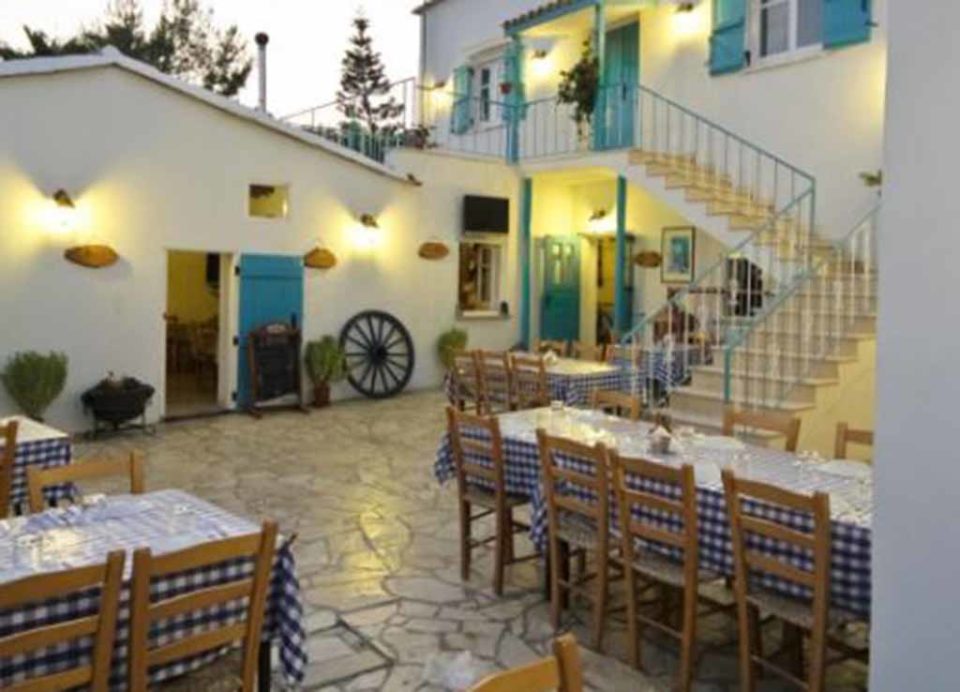 For a genuine traditional Cypriot dining experience, you’re probably better off venturing into a village and looking for a local taverna. Many of the tavernas in Larnaca town are mostly geared towards tourists and as a result, quality and tradition is often lacking.

About a 10-minute drive from the centre of Larnaca in the village of Aradippou you will find To Kazani. If you’re not familiar with the village, To Kazani isn’t the easiest of places to find but putting it into the GPS helped and we got there in the end!

Walking up to the restaurant we were quite excited as it looked beautiful. A traditional old village house yard that is exceptionally clean. The shutters and fittings are all painted a light blue and the house a brilliant white, giving it a summer vibe. The first thing I noticed was a staircase with an old style bicycle at the top as a centre piece. The place is filled with little tools and equipment that would have been used back in the day for cooking or farming. Things like a plough, bellows and bread making apparatus.

To Kazani is a family run business and you are likely to meet them when you visit. Valentina is a perfect hostess. You feel as though you are being welcomed in to their home as a guest and almost forget you are at a restaurant. The house itself dates back to the 19th century. The restaurant is called so, as it used to be a distillery for making Zivania and while renovating the house a large kazani (cauldron) was found with all the tools that were used. That shiny brass Kazani still proudly has its place within the grounds.

The courtyard does not feel like it is very large but could easily cater for approximately 80 to 100 people, which is not bad for a village taverna.

When we were seated the friendly waiter asked if we would like menus. The menu is limited but no more than you would expect. It has a lot of grilled food and kleftico but having heard about the meze at To Kazani, we knew that’s what we wanted.

It didn’t take long for the food to start coming out. The usual dips, yogurt, olives and bread alongside a fantastically fresh salad. You would think that the vegetables had just been picked! The food kept coming. Thick chunks of grilled halloumi with lountza and village sausages were a couple of the first plates to come out. The meat that followed was succulent and cooked well. It was piping hot so it had evidently come straight off the grill and on to our plates. The variety of meat was also fantastic – pork and chicken souvlaki, lamb chops, sieftalies and liver (not my favourite dish but I was assured it was good!) were all served in abundance.

When you go to a traditional restaurant out in a village you have to be prepared for proper traditional food. We were also served snails and pig brains. We were advised to put lots of lemon on the brains to enhance the flavour. If you close your eyes and forget what it is, the brains actually aren’t bad! Not something I would ever order by itself though! The snails, however, did actually have a bit of a twist to them as they had been cooked in ouzo!

We were all absolutely stuffed as the meal came to an end, or so we thought. Not long after the table was cleared, we were brought some fruit!

In addition to all of this, To Kazani is very reasonably priced. There’s not much more you could ask for. A wonderful setting, welcoming and friendly staff and fantastic food. Also, if you go on a Friday or Saturday, you are treated to live music! To Kazani is definitely somewhere I would visit again and I highly recommend a visit.

WHEN 6pm-1am (Closed on Sundays)

Foreign ministry says it treats ECHR cases ‘with due seriousness’