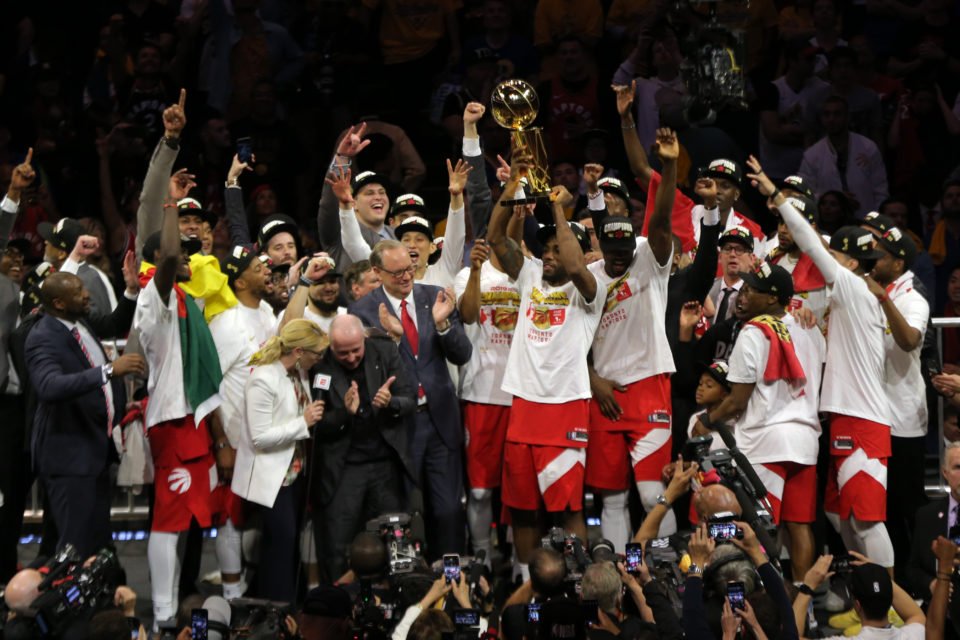 Fred VanVleet gave Toronto the lead for good on a 3-pointer with 3:46 remaining, and the Raptors took advantage of another serious Golden State injury to beat the Warriors 114-110 on Thursday night and reward Canada with its first NBA championship.

Pascal Siakam and Kyle Lowry scored 26 points apiece while VanVleet and Kawhi Leonard added 22 each in a balanced attack that allowed the Raptors to win on Golden State’s home floor for the third straight time en route to a 4-2 win in the best-of-seven NBA Finals.

The Warriors put up a valiant effort in their last game at Oracle Arena without Kevin Durant, who ruptured his right Achilles tendon in Game 5, and for the final 14:22 without Klay Thompson, who had 30 points before sustaining a left knee injury late in the third quarter.

The game was tied three times in the fourth quarter before VanVleet buried his fifth 3-pointer of the game for a 104-101 Raptors advantage.

Toronto went on to lead by as many as six before a 3-pointer by Draymond Green cut the deficit in half, and the Warriors rallied within 111-110 with 18.5 seconds left.

Golden State then forced a Toronto turnover on a bad pass from Danny Green with 9.6 seconds to go, but Stephen Curry misfired on a 3-point attempt. After a scramble for the ball, the Warriors were assessed a technical foul for calling a timeout with 0.9 seconds remaining when they had none left.

Leonard made it a two-point game by making the free throw, then added two more after getting fouled on the inbounds pass to secure Toronto’s third road win in the series. No team had accomplished that feat since the Los Angeles Lakers in 2001.

Leonard, who was chosen the Finals MVP, heads into free agency this summer. He said postgame, “I’m going to enjoy this with my teammates and coaches, and I’ll think about that later.”

Before Thursday, the only other players to earn a Finals MVP for two teams were Kareem Abdul-Jabbar and LeBron James. Now, that list includes Leonard, who also achieved the honor with the San Antonio Spurs in 2014.

What goes through Leonard’s mind when he considers that fact?

“Last summer, man. I was going through a lot. … I had a great support system,” Leonard said. “I just kept working hard, working hard, and I had my mind set on this goal right here. I came to a team, a new coach, that mindset was the same as mine… trying to get that ‘Larry OB’ over here. This is what I play basketball for, this is what I work out for all summer, during the season, and I’m happy that my hard work paid off.”

The last five games were won by the road team, the longest streak of road victories in a single Finals, according to the ABC broadcast.

Siakam had 10 rebounds and Lowry 10 assists to complete double-double performances for the Raptors, who outscored the Warriors 39-33 on 3-pointers.

Serge Ibaka was a fifth Raptor in double figures with 15.

Andre Iguodala had 22 points and Curry 21 for the Warriors, while Draymond Green recorded a second straight triple-double with 11 points, 19 rebounds and 13 assists.

The game formally closed Oracle Arena as an NBA home for the Warriors, who are moving to the Chase Center in San Francisco next season after playing in Oakland over a 47-year span.

The Warriors, two-time defending champions, managed to take an 88-86 lead into the final period despite losing Thompson with 2:22 remaining in the third on a dunk attempt on which he was bumped by Danny Green.

Thompson had his left knee buckle upon landing, and he immediately fell to the floor in serious pain.

After initially heading to the locker room, Thompson returned to the court to make two free throws, which put the Warriors up 85-80 before Golden State took an intentional foul so that he would leave the game.

A tightly contested first half featured 21 points by Lowry and 9-for-18 shooting on 3-pointers by the Raptors, but also 14 lead changes and just a 60-57 Toronto lead.

Thompson had 18 points in the half, during which neither team led by more than nine.

Sheep thieves in action in Salamiou