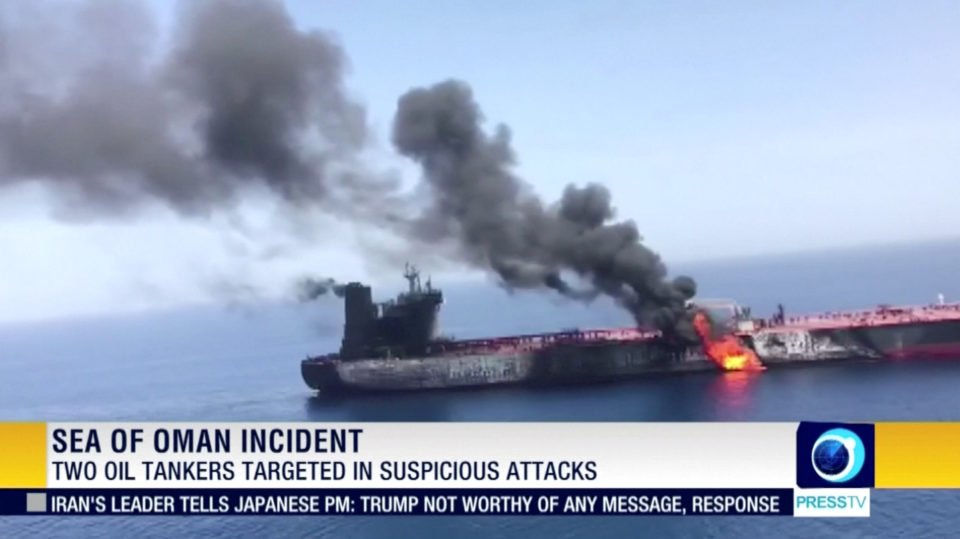 Still image taken from a video shows two tankers at sea, one of which has a large plume of dark smoke in the Gulf of Oman. PRESS TV/IRIB/via REUTERS

By Parisa Hafezi and Makini Brice

U.S. President Donald Trump blamed Iran on Friday for attacks on two oil tankers at the entrance to the Gulf despite Tehran’s denials, stoking fears of a confrontation in the vital oil shipping route.

Iran has dismissed earlier U.S. charges that it was behind Thursday’s attacks that crippled two tankers. It has previously suggested it could block the Strait of Hormuz, the main route out for Middle Eastern oil, if its own exports were halted.

They come at a time of escalating confrontation between the United States and Iran. Last month Washington sharply tightened sanctions against Tehran, which in response has threatened to step up its nuclear activity.

Asked how he planned to address Tehran and prevent any further incidents, Trump told Fox News: “We’re going to see.” He also said that any move to close the Strait of Hormuz would not last long.

Nevertheless, Trump, who last year pulled the United States out of an agreement between world powers and Tehran to curb Iran’s nuclear programme in return for the lifting of sanctions, said that he was open to negotiations with Iran.

“We want to get them back to the table,” Trump said. “I’m ready when they are.” He added that he was in “no rush”.

Iran has repeatedly said it will not re-enter talks with the United States unless it reverses Trump’s decision to withdraw from the nuclear deal.

The U.S. military released a video on Thursday it said showed Iran’s Revolutionary Guards were behind the blasts that struck the Norwegian-owned Front Altair and the Japanese-owned Kokuka Courageous in the Gulf of Oman, at the mouth of the Gulf.

Iran said the video proved nothing and that it was being made into a scapegoat.

Iran has accused the United States and its regional allies such as Saudi Arabia and the United Arab Emirates of “warmongering” by making accusations against it.

Tehran and Washington have both said they have no interest in starting a war. But this has done little to assuage concerns that the two arch foes could stumble into a conflict.

Oil prices surged on Thursday, reflecting the jitters, although they have since given up some of those gains.

U.N. Secretary-General Antonio Guterres told the U.N. Security Council on Thursday the world could not afford “a major confrontation in the Gulf region”.

China, the European Union and others have called for restraint from all sides. In a notable signal that close U.S. allies are wary of Washington’s position, Germany said the U.S. video was not enough to apportion blame for Thursday’s attack.

The U.S. military said black-and-white footage it filmed from a U.S. aircraft showed Iran’s Guards on one of their patrol boats drawing up to the Kokuka Courageous and removing an unexploded limpet mine from its hull.

Britain said it took the matter “extremely seriously” and, if Iran was involved, “it is a deeply unwise escalation”.

The Japanese-owned tanker, abandoned by its crew, was being towed to a port in the United Arab Emirates on Friday, after a Dutch firm said it had been appointed to salvage the ships.

The second tanker, the Front Altair, which was set ablaze by a blast, was still languishing at sea, although the fire that had charred the hull had been put out.

Last month Washington revoked waivers that had allowed some countries to continue importing Iranian oil, effectively ordering all countries to blacklist Iran or face sanctions themselves.

Iran’s crude exports fell to about 400,000 barrels per day (bpd) in May from 2.5 million bpd in April 2018, starving Iran’s economy of its main source of revenues.

Iran says it is still abiding by the terms of the nuclear deal, but cannot do so indefinitely unless it receives some of the economic benefits that were promised. Last month it said it would boost enrichment of uranium, a move that could potentially lead to it building up a stockpile prohibited under the deal.

Washington has also blamed Iran or its proxies for attacks on May 12 that crippled four oil tankers in the same area, and has said Tehran was behind May 14 drone strikes on two Saudi oil-pumping stations. Tehran has denied all those charges.

There have been conflicting accounts of the cause of Thursday’s blasts. An initial report that Kokuka Courageous was struck by a torpedo was dismissed by a source familiar with the issue. The owner of the tanker, which carried methanol, later said it was hit by two “flying objects”.

A source has said a magnetic mine could have caused the explosion on Front Altair, which had a cargo of naphtha.

Iranian TV showed 23 crew in Iran believed to be from Front Altair on Friday, and said its experts would assess whether they could return to the ship. The crew from Kokuka Courageous were picked up and handed to a U.S. Navy ship on Thursday.

The Trump administration said in May it would send troops and other forces to the Middle East, citing Iranian threats, a move Tehran has called “psychological warfare”.

The administration argues that the nuclear deal, negotiated under Trump’s predecessor Barack Obama, was too limited, and says re-imposing sanctions will force Tehran back to the table to make more concessions.

Most U.S. allies in Europe and Asia disagree and say pulling out of the deal was a mistake that will empower hardliners in Iran and hurt the pragmatic faction that promised Iranians economic benefits in return for opening up to the world.

Thursday’s attack took place while Prime Minister Shinzo Abe of Japan – a big buyer of Iranian oil until it was forced by the new U.S. sanctions to stop – was visiting Tehran on a peacemaking mission, bringing a message from Trump.

Iran dismissed Trump’s message, details of which were not made public. “I do not see Trump as worthy of any message exchange, and I do not have any reply for him, now or in future,” Iranian Supreme Leader Ali Khamenei said.