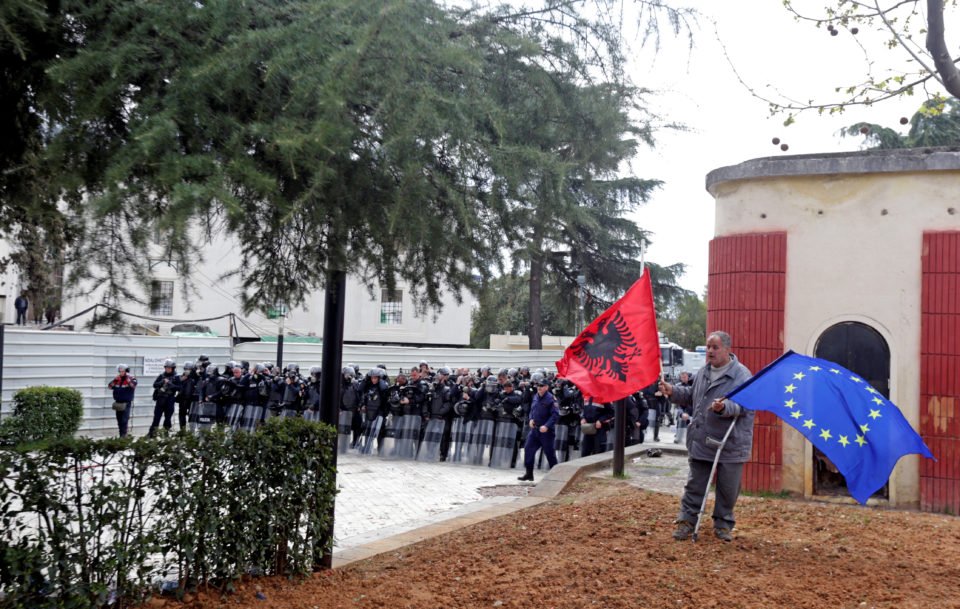 FILE PHOTO: A man carries an Albanian flag and an EU flag as supporters of the opposition party participate in an anti-government protest in front of the Parliament in Tirana, Albania, March 28, 2019. REUTERS/Florion Goga/File Photo

European Union governments failed on Tuesday to make good on a promise to open membership talks with North Macedonia and Albania, which face further delays to their hopes of joining the bloc due to resistance from northern Europe.

Europe ministers met in Luxembourg almost a year to the day since they unexpectedly postponed a decision to start the talks with the two countries and cast doubt on the EU’s Balkan strategy to counter a growing Russian and Chinese presence.

After much wrangling, the 28 EU states unanimously agreed to take “a clear and substantive decision” on the two hopefuls no later than October.

Despite a recommendation by the EU’s executive Commission for North Macedonia and Albania to start talks, Germany’s parliament has pushed back any decision until September and the Dutch lower house has rejected negotiations with Albania.

France has also shown reluctance, calling for the EU to sort out its own internal problems before admitting new members.

The EU text says that any future enlargement would not only depend on candidates’ progress on reforms but also on “ensuring that the EU can maintain and deepen its own development, including its capacity to integrate new members”.

The EU’s appetite for further enlargement has been steadily eroded by anti-immigration sentiment among voters and by increased criticism of the bloc’s already complex, creaking decision-making processes.

Albania and North Macedonia had hoped the bloc’s Europe ministers would give the go-ahead at the meeting in Luxembourg. That would have cleared the way for approval by EU leaders at a summit in Brussels on Thursday.

A group of 13 countries including Italy and Poland that favour opening accession talks say the EU’s credibility is at stake after North Macedonia sealed a landmark deal with Greece to end a decades-long name dispute in the hope of unblocking its path to both the EU and NATO.

“It is in the interest of the EU, if we want to keep our leverage … if we want show that we are a global actor, if we want to show we are serious about enlargement,” Slovak Foreign Minister Miroslav Lajcak said on Monday.

Perceived as one of Europe’s most corrupt countries, according to Transparency International, Albania – which is already a NATO member – has made only limited progress in combating money laundering, EU and U.S. officials say, despite firing corrupt judges and prosecutors.