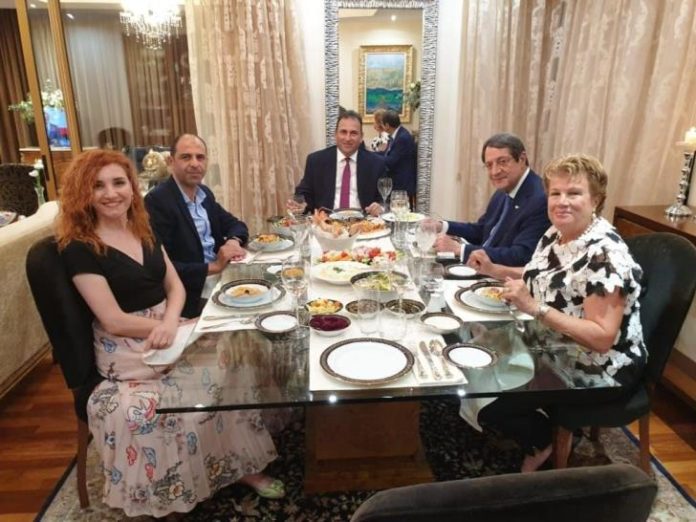 Kudret Ozersay and President Anastasiades at the dinner on June 4

Opposition Akel on Wednesday called on President Nicos Anastasiades to explain his meeting with Turkish Cypriot ‘foreign minister’ Kudret Ozersay behind the back of Turkish Cypriot leader Mustafa Akinci and away from public scrutiny.

The meeting, which took place in the form of a dinner, was on June 4 in the government-controlled areas and was explained away by the government on Tuesday as a social occasion also attended by the wives of the two men.

Their host Yiannakis Moussas, the Maronite representative in parliament, said on Wednesday that it was a private, family dinner and that there had been no discussion on a two-state solution or any sort of negotiations.

On why he invited Ozersay and not Akinci, Moussas said he has known Anastasiades and Ozersay for many years and that it was not the first time he had taken such initiatives.

“It is in my nature to take such initiatives when I know people, acquaintances and friends who can affect the course of things in the country. I believe it is my duty,” Moussas told media on Wednesday.

He also said that recent announcements from the north concerning the closed off town of Varosha and Maronites had nothing to with the dinner and that it was a mere coincidence.

Anastasiades stoutly defended his attendance at the dinner on Tuesday night.

“I do not think I need to get permission for who I am going to share or not, especially when it is a purely social event,” he said.

But Akel said the meeting had come to light only when it was leaked on the Turkish Cypriot side. Akinci was angered by the move and on Tuesday his spokesman Baris Burcu confirmed the dinner had taken place.

“It was made public then and only then,” Akel said in a statement on Wednesday.

“Previously, Mr Anastasiades had not said anything at all. This raises additional questions because he tried to conceal this meeting.”

Akel said it was curious that the meeting had taken place during “a period of Turkish aggression” when Anastasiades was taking a hard stance towards Ankara. “We all know that Mr Ozersay is Ankara’s man,” the party said. “And let us not say that it was just a social meeting.”

It also said it was well known that the ‘government’ of Ersin Tatar, in which Ozersay participates, has a two-state solution as its official policy.

“Mr Ozersay has repeatedly supported this position. We wonder, then, what he discussed with Mr Anastasiades? The courting of Mr Anastasiades with a two-state solution can only increase the serious concerns we have about where Cyprus is finally going,” it added.

The party said that if Anastasiades wanted to give impetus to efforts towards a solution he ought to be meeting the Turkish Cypriot leader “a politician who despite pressures from Turkey, continues to insist that Cyprus should be reunited on the agreed basis of a solution, ie a bizonal, bicommunal federation”.

“Instead, he chose to have a social meeting with Mr Ozersay,” the party said.

It added that there were too many questions and Anastasiades had an obligation to respond “not to us but to the Cypriot people” and not to hide behind the excuse that he can meet whomever he wants.

“He is the president of the Republic. He has an obligation to be accountable to the people of Cyprus for what he is trying to promote. Our concerns are growing because, unfortunately, we see after his flirtation with the two-state solution, it is now obvious due to his association with political figures who promote this solution to the Turkish Cypriot community.”

Responding to Ozersay’s comment in the north that “such meetings are often more beneficial than official meetings”, Akinci’s spokesman Baris Burcu called on the ‘foreign minister’ to say “what vision he shares with Nicos Anastasiades”.

Ozersay hit back saying that after his “social dinner” with Anastasiades he had briefed the ‘council of ministers’ and the ‘prime minister’ Tatar. He referred to a meeting Akinci had in the past with Akel general-secretary Andros Kyprianou without briefing him as ‘foreign minister’.

Meanwhile, Foreign Minister Nicos Christodoulides told Politis radio on Wednesday that there was no ‘secret’ dinner’. It was a social dinner on June 4 in the presence of their spouses where nothing was said about the Cyprus issue, he said.

In any case, Christodoulides said, last week Anastasiades has asked the UN to arrange a meeting between him and Akinci to discuss Turkey’s activities in the island’s EEZ and to see how the Cyprus talks could resume. “The Turkish Cypriot side has still to respond,” he said.