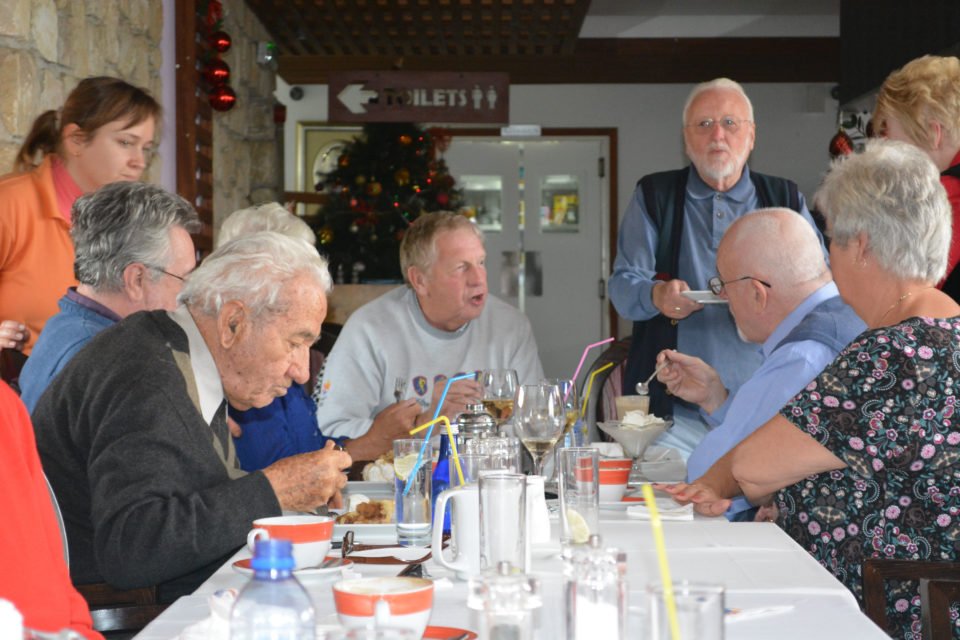 Writers. They’re a solitary lot, right? “My Man Booker? Oh I wrote that at Glastonbury – the crowd surfing was insane!” said No Writer Ever. Surely writing is the pursuit of the hermit, alone in a rickety walk up in Paris; of the solo creative working away in the backstreets of Berlin. Or is that a myth? Do we have it all wrong, and writers are actually a sympathetic lot who enjoy the camaraderie of a social occasion and can benefit hugely from the support of their pen fellows?

If the Paphos Writers Group are anything to go by, it’s definitely the latter. Here, a love of writing draws a crowd of friendly enthusiasts to Neo’s bar each Thursday morning – there to share, support and encourage one another and to share their love of the written word. They’re a self-proclaimed band of non-elitist writers who welcome all and sundry to their ranks: “Very open, very welcoming,” reveals Chairman John Goodwin. “This is real inclusivity; a support network in what can amount to quite a solitary occupation. Whether you have a story to tell, or a poem to share; should you need help with a manuscript or even just enjoy writing stuff down, we’re here!”

Founded in 2004, the group began with just a handful of members: three or four resident expats who were passionate about writing. As more and more came to hear of them, numbers grew and, by the time John took over the chair in 2013, the ensemble had become a network of open-handed support and encouragement.

“It’s about sharing our experiences, our hopes and our disappointments,” he muses. “It’s about helping other writers where and when you can, casting a fresh pair of eyes over your work. The idea is that you can gain in confidence and get really good feedback from your fellows.”

Feedback from relatives, he adds, doesn’t always work. They’re often well-meaning, but generally afraid of upsetting familial hopefuls: “They tend to be very affirmative without being knowledgeable. In the long-term, having your manuscript read by relatives is unfair to any aspiring writer; it can often give false hope, sending you out with your skirt tucked into your knickers! What you need is kindness from people who know what you’re going through, people who’ve done it themselves. They’re going to look for the positives and help you with the bits that need work.

“We always say that our meetings finish at noon, but the support goes on indefinitely,” he adds. “It doesn’t matter if you’re not particularly adept at putting words together, or your spelling or punctuation isn’t up to scratch. That’s what we’re here for: help and feedback. And even if you’ve never written a word, it doesn’t matter. It’s that desire to write that bonds us as a group.”

While meetings tend to follow the same format each week (follow up on the previous session’s homework task, help with feedback on private work, perhaps a short exercise or word game) the writers do like to mix it up, John acknowledges. “Some people like poetry, some prefer prose, and we’re very accepting of whatever people want to write. There are always suggestions from the floor that we can act on, someone throws something into the discussion that becomes a great idea for a homework task or something. The idea is that you come along and make your contribution one way or another; maybe you have something to say about writing, or you’ve done some research you want to share, or you want to read something out. Anything you want really: you can get some feedback from around the table and hopefully that helps you improve your piece. It’s all pretty interactive and we have a great laugh.”

That said, John is quick to point out that the meetings are not a class. “This is absolutely not a lesson; we’re not here to teach! But we will give you our sincere support, and you’ll probably have a jolly good time of it. We welcome absolutely everyone.”

With members ranging from their early thirties to their late eighties, from delightfully disparate backgrounds – “along with the mix of locals and Brits, we have a Jordanian, a South African, an Irish poet, a young Russian mum, and a Spaniard who’s fascinated by local myths and legends” – it seems that the group’s ethos is based on input rather than output. “I think everyone has a story in them,” says John. “Often more than one!”

He himself is the author of five books, including Slow Hand (a detective thriller set in the world of modern jive), Norm and Dig’s Epic Adventure (a light fantasy novel complete with ‘itinerant islands, fearsome flying fish, preposterous pirates, and ample alliteration’), and Take a Look in My Shorts (an eclectic collection of shorter works). And yet before The Paphos Writers, writing had never loomed large in John’s life.

“I’ll be honest,” he grins. “I was in the construction industry for years, and when I joined I’d never written anything but technical stuff, manuals and things. But then that’s part of the charm of our group,” he adds, “we encompass all sorts of different backgrounds… There’s a good few teachers amongst us. There’s a nurse, a farmer, and a farrier. We’ve even got a couple of policemen!”

Between them they’ve written more than 50 books across a wide range of genres. Spy novels, thrillers, poetry, and chick lit sit side by side on Amazon’s virtual bookshelves with short story compilations, historical fiction and foodie books. There have even been a couple of collaborative efforts over the years; most recently Raft of Life, in which each of the main chapters was written concurrently, and later merged around a broad framework to form a single manuscript.

“Being part of a writing group kind of keeps you going,” John concludes. “You get to celebrate with those who’ve won competitions, and sympathise with anyone who’s had a rejection letter. And being part of a group is a stimulus to your writing. You can trigger ideas, solidify your own goals – even if it’s only a poem for next week’s meeting – and be a much-needed inspiration to a like-minded community. Writing,” he concludes firmly, “does not have to be solitary!”

The Paphos Writers Group meets each Thursday at 10am at Neo’s Bar, near Coral Bay. For more information call John Goodwin on 99 203102 or visit ww.paphoswritersgroup.org