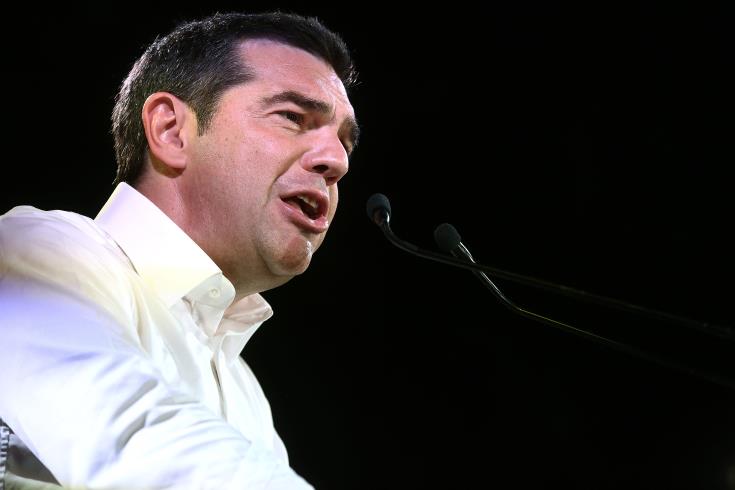 Turkey’s activities in the region are an indication of its weakness and isolation, Greek Prime Minister Alexis Tsipras said on Wednesday, according to CNA.

Speaking on OPEN TV, the Greek prime minister argued that the moves of Greece and Cyprus, and the alliances that have been built in recent years with neighbouring countries, had led to a strategic impasse for Ankara.

“Turkey has no strong alliances. She sees she cannot claim her differences with Cyprus are a bilateral issue, as with Greece,” Tsipras was quoted as saying.

“The EEZ of Cyprus is also Europe’s EEZ, the borders of Greece are also borders of Europe,” he said, adding that Athens and Nicosia are in constant co-operation.

Regarding the possibility of a military incident with Turkey, Tsipras stressed that such things are always possible and that was why the Greek government was taking the necessary measures.

He underlined that Greece had strong armed forces and noted that Greek citizens could sleep peacefully. “But this is not enough, they need the strong alliances that Greece has developed. This is demonstrated by the reaction of the US and the EU and the possibility of taking concrete measures against Turkey is open, “ he added.

At the same time, Tsipras expressed the conviction that Turkey would not put a second drilling rig in the area between Kastelorizo ​​and Cyprus, but in any case, there was a deterrence plan, he said. “Greece will not back down.”

Cyprus and Greece are heaping pressure on the EU on Tuesday to take action against Turkey over gas drilling west of the island, as Ankara said Tuesday it would step up exploration in a move that could further strain ties with Western allies.

Ankara, which does not have diplomatic relations with Cyprus, claims that certain areas in Cyprus’s offshore maritime zone, known as an EEZ, fall under the jurisdiction of Turkey or of Turkish Cypriots.

A Turkish drillship, the Fatih, has been anchored west of Cyprus since early May and recently began drilling.

Turkey’s energy minister Fatih Donmez was quoted as saying on Tuesday that a second ship, the Yavuz, would be dispatched to the area on Thursday.

“We have 100-120 days of a schedule for this task. We will have reached our targeted point at the end of July,” he said.

Cyprus and its close ally Greece have urged Brussels to take action against Turkey for what they regard as a clear infringement of Cyprus’s sovereign rights. In a phone conversation with European Council, President Donald Tusk on Tuesday Tsipras said Brussels should “unreservedly condemn” Turkey’s actions.

Cyprus on Monday threatened to block any agreement to admit new members to the EU unless Brussels toughens its line towards Turkey. On Tuesday, President Nicos Anastasiades said he was confident the EU would take a tougher stance towards Turkey.

The Fatih is in an area Turkey considers its continental shelf, while the Yavuz would be dispatched to an area Turkish Cypriots consider they have rights over. The Turkish Cypriots, supported by Ankara, claim a share in any offshore wealth as a partner in the establishment of the Republic of Cyprus in 1960.

The United States and the EU have previously expressed deep concern over Turkey’s plans.

Turkey’s foreign ministry said on Tuesday its relations with the EU had fallen hostage to the Cyprus issue and that the bloc’s recent statements had a completely Greek perspective. It also backed a proposal by Turkish Cypriots for a joint energy commission that Greece has rejected.

Argentina can bounce back against Paraguay, says Scaloni