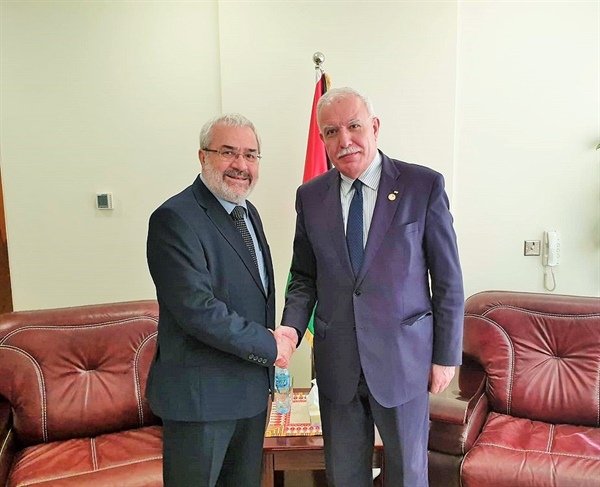 A trilateral summit between Cyprus, Greece and Palestine will be held before the end of the year, Palestinian officials said on Wednesday.

The announcement came after a visit by the permanent secretary of the Cypriot foreign ministry, ambassador Tasos Tzionis in Ramallah.

According to an announcement by the Palestinian foreign ministry, the parties agreed that Malki would make an official visit to Cyprus soon to finalise arrangements for the meeting of a joint committee before the end of this year, and preparations for the Greece-Cyprus-Palestine trilateral summit with the participation of Palestinian President Mahmoud Abbas. The summit is to be held before the end of the year, most likely in Cyprus.

Malki praised the historical ties that bind Cyprus and Palestine, and the Cypriot stance in support of the Palestinian people and its leadership in seeking to achieve its legitimate national rights. He called for their strengthening and development in all areas.

Ambassador Tzionis reaffirmed the position of the Republic of Cyprus on the two-state solution and the right to self-determination, and Cyprus’ continued support for Palestinian institutions. During this difficult political and economic period for the Palestinian people, he said, it is important to work to provide support, and increase economic cooperation and support various sectors such as education, tourism, trade and business.

He also noted Cyprus’ interest in developing and strengthening bilateral relations between the two sides and implementing the signed agreements.

Jadu called for the strengthening and development of bilateral relations stressing the importance of continuity in holding such bilateral meetings for consultation and exchange of views on many international and regional issues.

Celebrate the International day of Yoga