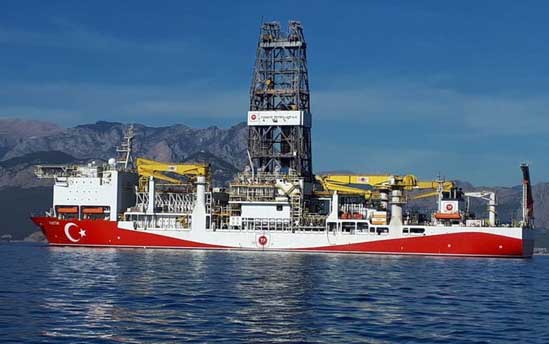 Turkey launched a second drilling ship on Thursday that will conduct natural gas operations off the northeast coast of Cyprus for three months, a move which risks aggravating a conflict with Cyprus over jurisdiction rights for oil and gas exploration.

Turkey and the internationally recognised Cypriot government have overlapping claims in that part of the Mediterranean, an area thought to be rich in natural gas.

Turkey’s Energy Minister Fatih Donmez said at the launch of the vessel, the Yavuz, it would operate in a borehole near Cyprus’ Karpas peninsula, and reach a depth of 3,300 metres.

The dispute has escalated in the past month and also risks straining Ankara’s relations with its western allies after the United States and European Union expressed concern at Turkey’s drilling plans.

Ankara, which does not have diplomatic relations with Cyprus, claims that certain areas in Cyprus‘s offshore maritime zone, known as an EEZ, fall under the jurisdiction of Turkey or of Turkish Cypriots.

Donmez said unilateral agreements made between Cyprus and the regional countries that attempted to “steal” the rights of Turkey and Turkish Cypriots had “no legal validity.”

“Turkey will continue its operations in its own continental shelf and in areas where the Turkish Republic of Northern Cyprus has licensed Turkiye Petrolleri [Turkish Petroleum Corporation] without stopping,” Donmez said.

“We are warning actors from outside the region that are forming partnerships with Cyprus: Do not chase illusions that will yield no results,” he noted.

Melih Han Bilgin, director of the Turkish Petroleum Corporation, said the precise targets of the second drillship remained to be determined.

The first likely location would be a surveyed area off the Karpas peninsula. Once the operations were done there, the drillship would move to a second location.

“There is the Yavuz to the east of Cyprus, and the Fatih will continue operating in the west,” Bilgin was quoted as saying during the launch of the vessel from the port of Dilovası in the Marmara region of Turkey.

“We have a five-year business plan ahead of us,” he added.

According to the official, the crew of the Yavuz currently consists of 150 individuals, of whom 53 per cent are Turkish nationals.

Greece, which backs the Cypriot government, has called on the European Council to condemn Ankara’s actions in the region.

Cyprus has also threatened to jeopardise European Union enlargement talks if the bloc does not take action against Ankara.

It was not immediately clear what action the EU might take against Ankara, and the bloc will ask its foreign service, the European External Action Service, to put forward options, the draft statement said.

One senior EU official said one option was to end talks with Turkey over extending a customs union, which already allows tariff-free trade with the EU for industrial goods but not services or agriculture.

Another option could be formally suspending Turkey’s status as an official candidate to become a member of the European Union, although talks have been frozen for over a year.

Ahead of the EU summit on Thursday evening, president Nicos Anastasiades met with Donald Tusk, president of the European Council.

Anastasiades briefed Tusk on Turkey’s ongoing violations of the island’s EEZ as well as the recent Turkish move in the fenced-off town of Varosha.

“I expect the European Council to confirm its full solidarity with Cyprus and its readiness to respond appropriately,” Tusk stated after the meeting.

Plant of the Week: Poisonous beans were used in Africa to prove witchcraft